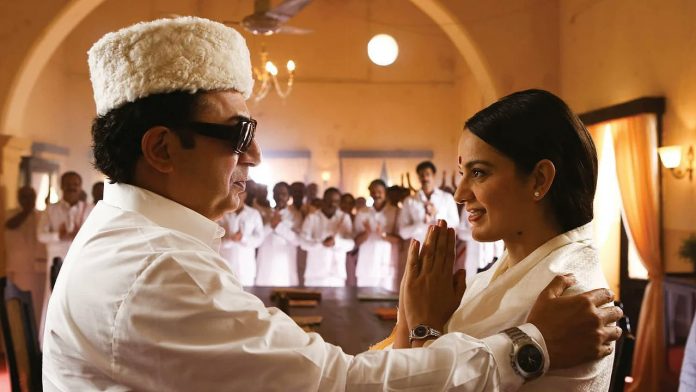 Love the people, and they will love you back, advises MJR to his protegee Jaya while introducing her to politics in the film 'Thailavii'

After a 10-year hiatus, the haughty actress Jayalalithaa meets her mentor, the Tamil Nadu chief minister M G Ramachandran at a dance performance at the World Tamil Congress in Madurai. Watching her dance brings back all the loving memories of his “Ammu” (as he used to affectionately call her) and he asks her to join politics. A defining moment clearly in the male-dominated world of Tamil Nadu politics.

Jaya wards him off saying she has no understanding of politics but he coaxes her by stating a simple maxim: ‘Love the people and they will love you back’. It is as easy as that to win the gullible hearts of the people of Tamil Nadu, it seems.

The Kangana Ranaut starrer ‘Thailavii’, which is based on the life of six-time Tamil Nadu Chief Minister Jayalalithaa, tells us that the actor was ostensibly convinced by this platitude to enter politics and to dig in her heels even after MGR’s death to fight for a place in the party and become an all-powerful head of AIADMK and ruler of Tamil Nadu.

According to one of her biographers, Vaasanthi, however, Jayalalithaa knew exactly what she was getting into when she joined politics. The actress, who had done over 147 films, was in her late thirties, her acting career had hit a low and she was lonely after her mother’s death. In fact, Vaasanthi had once pointed out in a public literary platform that Jayalalithaa should not be believed when she said that MGR forced her into politics. The Jayalalithaa biopic, ‘Thailavii’, hardly delves into the many dimensions of this complex, enigmatic character of J Jayalalithaa, the actor-turned-autocratic politician.

Instead, it is a breezy retelling of her journey from a 16-year-old beautiful actress glued to her books on the film sets in 1965 till she becomes the chief of a prominent Dravidian party in the state in 1991.

Directed by AL Vijay (‘Deiva Thirumagal’, ‘Madrasapattinam’ and ‘Thalaivaa’), this film turns out to be a one-sided portrayal of a politician, who the Supreme Court accused of misusing her public office to amass vast unaccountable wealth through “masked banking exchanges” and “acquiring vast tracts of land for pittance”. Here in the film, she is a woman wronged, an angry Draupadi, a righteous woman who is only motivated to do good for the people, especially children. 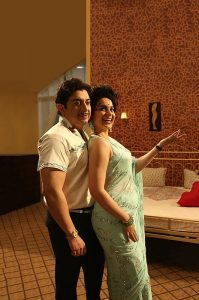 The first half of ‘Thailavii’, which starts off with her introduction to the charismatic superhero, MGR, who is referred to as MJR, is entertaining. They meet for the first time on the sets of ‘Ayirathil Oruvan’. Kangana carries off the younger, proud Jayalalithaa with ease and aplomb swinging to the songs of the 60s and slowly falls for the much-married actor. In real life, they went on to make 27 films together.

Arvind Swami nails the legendary MGR effortlessly. He is almost convincing with the walk, the expressions and the way he looks. It is an effective portrayal that stands out in a film in which the arclights are largely focussed on Kangana. Swami may not reach the nuanced heights that the powerhouse actor Mohanlal did in Mani Ratnam’s ‘Iruvar’ but Vijay’s directorial ‘Thailavii’ only offers that much scope for the actor.

The film gives a lot of importance to the character of RN Veerapan (who is based on Dravidian leader RM Veerapan) who tries his best to break up MJR and Jaya. (They probably needed a villain in the piece to make Jayalalithaa look better and he seemed to fit the bill, luckily it is not M Karunanidhi). But Jayalalithaa also cleverly woos MGR’s screen rival of that time, Sivaji Ganesan, to bring MGR back to her. However, she is heartbroken when he casts her aside to start his own party and to become a CM.

But, Veerapan is unable to stem the tide of events as they meet again and MGR brings her into politics and into the AIADMK, known in the film as MTMK. It is here that ‘Thailavii’ starts to drag as the director shows how Jayalalithaa did great things to obliterate hunger in children through mid-day meals and emerges as the succour of the poor and deprived of the state, with a rousing song playing in the background.

MGR’s death in the film, and the subsequent political events that unfold hold no depth. The worst hand is dealt to the tall leader, the wily K Karunanidhi, played by Nasser. Besides archly lifting one eyebrow and making a grand statement that “it was not right what happened” to Jayalalithaa in the state assembly, he doesn’t have much of a presence in the movie. “This is a black day in the history of politics,” he says grimly about the attack on her. Probably, with a premonition that he had woken a beast and knew she would end up tormenting him for the rest of his political career.

Bollywood actor Bhaygashree as Kangana’s mother and Madhu as MGR’s wife Janaki, hardly have any screen time to talk about. The film has been written by Rajat Arora of “Dirty Picture” (which again did not do justice to Silk Smitha) fame and has no great dialogues to speak off considering that Karunanidhi prided himself on his poetic comebacks.

Kangana’s acting in the second half falls flat as she strives hard to portray righteous anger, pathos and don Jayalalithaa’s imperious look. There is a scene, in which she delivers a speech in Rajya Sabha in ‘perfect’ English that ostensibly left Mrs Gandhi and her son Rajiv Gandhi stunned, says the film. It turns out to be ludicrous rather than dramatic.

Incidentally, MGR had nominated Jayalalithaa to Rajya Sabha giving her seat Number 185 in the Upper House, which was once occupied by the late leader CN Annadurai, when he was an MP in 1963.

Jayalalithaa’s life was marked by ups and downs and there was even a rumoured marriage with Telugu actor Shobhan Babu, which was never proved. But Jayalalithaa’s controversial life, which continues to excite morbid interest is bound to attract filmmakers. There’s ostensibly another Jaya biopic on the way to be directed by Priyadarshan and there’s talk of a sequel to ‘Thailavii’. This is probably where Chinnamma (Jayalalithaa’s close aide Sasikala) will get to play a more prominent role since you have to look hard to spot her in this film.

The Hindi version of ‘Thailavii’ is streaming on Netflix.