Just when Marvel fans were recovering from the heartbreaking climax of Avengers: Endgame, in a shocking turn of events, Marvel Studios president Kevin Feige decided not to produce anymore Spider-Man movies under the Marvel Cinematic Universe banner.

As Marvel and Sony end their four-year-long deal allegedly over revenue disputes and sharing of films, the parent company Disney seems to be losing a series of movies which got the most positive welcome from the comic book fans.

“Much of today’s news about Spider-Man has mischaracterised recent discussions about Kevin Feige’s involvement in the franchise. We are disappointed, but respect Disney’s decision not to have him continue as a lead producer of our next live action Spider-Man film,” a Sony spokesperson said in a statement to The Hollywood Reporter.

Also read: Endgame not the end of Marvel Cinematic Universe

Spider-Man, the web-slinging superhero was created by Stan Lee and Steve Ditko and first appeared in the 1962 Silver Age of Comic Books, Amazing Fantasy. Marvel, however, has also published a lot of standalone comics for the hero aka Peter Parker.

Other than making headlines in comic books and video games, Spider-Man’s first appearance in live- action movies Spider-Man was released in 2002, followed by Spider-Man 2 in 2004 and Spider-Man 3 in 2007. Originally under Sony, the franchise got a reboot of the new director Marc Webb, cast and title with the release of The Amazing Spider-Man in 2012 starring Andrew Garfield. 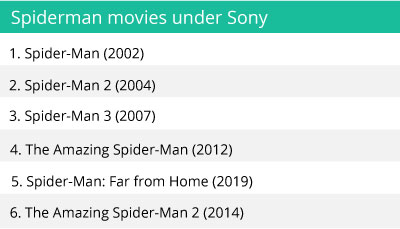 The release of The Amazing Spider-Man 2 in 2014 marked the opening of discussions of a collaboration between Marvel and Sony of a deal for Spider-Man to appear in the Marvel Cinematic Universe.

Spider-Man played by Tom Holland made his first appearance when Tony Stark aka Iron Man aka Robert Downey Jr. found the young Peter Parker and introduced him in the final fight sequence in 2016’s Captain America: Civil War. The character then got its standalone films in Spider-Man: Homecoming (2017) and Spider-Man: Far from Home (2019), however, playing crucial roles in Avengers: Infinity War (2018) and Avengers: Endgame (2019). 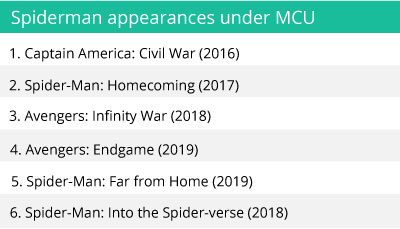 In fact, the animated superhero film Spider-Man: Into the Spider-Verse (2018) got much appreciation from MCU and Spider-Man fans.

Sony’s highest-grossing film of all-time, Spider-Man: Far from Home hit the screens two months after the tear-jerking end of Avengers: Endgame which marked the death of the most coveted characters of Iron Man and Captain America.

However, the story goes way back in 1996, when Marvel filed for bankruptcy in US Bankruptcy Court and sold its most profitable characters – Blade, The Fantastic Four and X-Men to 20th Century Fox and Spider-Man to Sony Pictures for quick cash.

Under the banner of Sony, Blade made a modest $70 million off which Marvel pocketed only $25,000, X-Men launched the idea of modern era of superhero movies and Spider-Man grossed over $400 million and nothing in the favour of Marvel.

Until, in 2005, Marvel Studios was launched with a seven-year and $525 million financing deal with Merrill Lynch. But to get the collateral, Marvel had to put everything they had at stake including its ten properties – Captain America, The Avengers, Nick Fury, Black Panther, Ant-Man, Cloak & Dagger, Doctor Strange, Hawkeye, Power Pack and Shang-Chi.

Also read: Marvel to spread its superhero magic on Disney+

However, the rest is history as Marvel Studios’ risk of putting The Avengers as collateral worked in their favour with the first Iron Man film grossing over $500 million, eventually selling to Disney for $4.3 million in 2014.

But Sony Pictures, on the other hand, failed to come to a common consensus with Marvel over 50-50 ownership of future Spider-Man movies, proposed by Disney.

Needless to say that not just Endgame but the end of this Sony-Marvel deal and no more Spider-Man films would leave many fans devastated worldwide.