Director SS Rajamouli’s ability to light up celluloid screens with invincible and physically robust characters, spinning a riveting, emotional drama around them, was once again on display in the fiery trailer of his much-anticipated film, ‘RRR’, which was unveiled on Thursday (December 9). The trailer had Rajamouli’s fiery signature all over it, as ‘RRR’, which is set to release in theatres in January, promises to be another out-of-the world spectacle like his earlier super successful mega outing, ‘Bahubaali’.

RRR, which is the abbrievation of Raama Roudra Rushitam in Telugu, and in English translates to Rise, Revolt, and Revenge, has been inspired by the lives of Telugu freedom fighters Alluri Sitarama Raju and Komaram Bheem. While Ram Charan plays Sitarama, who is shown initially as a policeman in the trailer, Jr NTR essays Komaram, protector of the Gond tribe and a tough freedom fighter.

The film is set in 1920’s and the trailer opens with Jr NTR crossing horns with a fierce tiger, (but NTR can roar back even more menacingly!), while Ram Charan is the dutiful cop working for the British. There are some stunning scenes showing both heroes bonding together – walking towards each other under water, and jointly fighting the British forces. Weaponry is wielded in an altogether unique way in the film, as Ram Charan appears in another form (in a Parshurama kind of avatar). 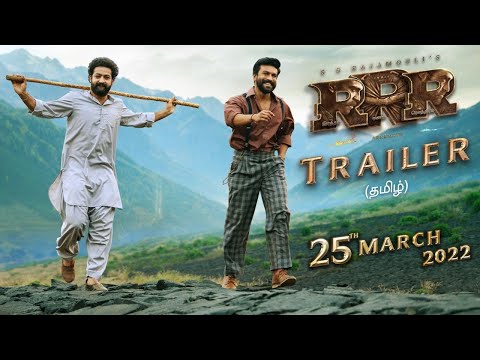 Alia Bhatt is Sita, while Ajay Devgn seems like another freedom fighter and described as the master of strength. One spots Samuthrakani and Sriya Saran as well in the 3 minute 60 second trailer.

At the launch of the film in 2019, Rajamouli had told the media that there are gaps in the lives of these legendary freedom fighters Alluri Raju and Komaram Bheem. “We don’t know what happened in their lives in these years. It is through this fictional story we’d like to show what could have happened in their lives and what would have happened if they met and bonded,” Rajamouli had said. The film, bankrolled by DVV Danayya of DVV Entertainments, has been written by KV Vijayendra Prasad, and also stars Olivia Morris, Ray Stevenson, and Alison Doody.

At the trailer launch in Mumbai, Alia Bhatt, talked about how she had bagged the role after meeting Rajamouli at Hyderabad airport. She had approached him and told him that she wanted to work in his film. “I’ll do anything to be in your film’. And it really was like a dream come true when he said that there is actually something that I could do. He said, ‘Sita is very important in the film, and I am happy that you match her character. I prepared for a year and worked on my lines for a year. The most scary part for me was to say my lines in Telugu,” said Alia Bhatt, according to media reports.

While Ajay Devgn said that Rajamouli’s cinema is one of a kind. “It is only his. It is earthy. His study of characters is immense. I feel he reads a different version of Mahabharata all the time,” he said. Rajamouli meanwhile said that language of a film is not important. “If you believe on your core storytelling ability, then the language doesn’t matter. Language is just a bridge to the story. The visual is what tells you the story in cinema,” pointed out SS Rajamouli.

Interestingtly, RRR producer, Jayantilal Gada made it clear that the film will stream on OTT platforms only after 90 days. He added that they will stick to the 90 day period unlike what is happening now with people negotiating and streaming their films after 30 days of its release.

Meanwhile, Twitter reacted to the trailer. Several fans shared glimpses from the trailer, and Rajamouli’s name trended on Twitter along with the hashtag ‘Goosebumps’.

While actor Samantha Prabhu too raved about Ram Charan’s transformational look in the trailer.

The best transformation I have seen on screen @AlwaysRamCharan ???.. absolutely owned it .. in the best form ever ??#RRRTrailer pic.twitter.com/nb7Fll5tuX

After watching the trailer of RRR, Bollywood filmmaker Ayan Mukerji, who is in the midst of working on his own big budget film, ‘Brahmastra’, said he was ‘overwhelmed’. He wrote on Instagram that he was “Mind-blown. Overwhelmed. Beyond Excited. Find myself sitting in the office today unable to do anything except think about RRR. Feel child-like, unable to contain my excitement, and so I share it here now – my abundant respect and love for Rajamouli Sir & the Absolute Master of Cinema that he is!”