Actor Joaquin Phoenix’s Golden Globes acceptance speech was laden with expletives, call for action on climate change, and certain moments of reflection in a rambling address.

The Hollywood star took home the golden gong for the best actor in a motion picture – drama for his performance in ‘Joker,’ directed by Todd Phillips. Phoenix started his speech thanking the Hollywood Foreign Press Association (HFPA) for its ‘bold move’ of serving a vegan feast at the award ceremony.

The decision to serve a vegan feast at the Golden Globes was made out of concern for climate change, the HFPA said earlier this week. The actor then gave a shout-out to his fellow nominees. “We all know theres no f****** competition between us. Its like thing that is created to sell advertisements for the TV show. Im inspired by you…. f******. I can’t believe the beautiful, mesmerising, unique work that you have all done this year. I really do feel honoured to be mentioned with you,” he said.

Phoenix added he earlier reached out to some of the fellow nominees personally, some he is still ‘intimidated’ by. “Even though we share the same agent, Hi Christian (Bale). You’re not here,” he said about the actor, who didn’t attend the ceremony due to illness. He thanked Phillips and called the ‘Joker’ director for being an “amazing friend and collaborator”.

Phoenix, known for being notoriously moody, acknowledged that he can be ‘a pain in the a**.’ “I cannot believe you put up with me. I’m so indebted to you,” he said. He also called out Hollywood to walk the talk on voting and climate change.

Veteran actor Tom Hanks choked up as he accepted the Cecille B DeMille award at the Golden Globes 2020 and dismissed his tears as being part of a cold. “I swear to God, Im not nearly this emotional at home,” said the versatile actor in his acceptance speech.

Chosen by the HFPA board members, the Cecil B deMille award is given annually to a talented individual who has made a lasting impact in the world of entertainment.

Singer John Legend is set to make a guest appearance in the fourth season of critically acclaimed family drama ‘This Is Us.’ Legend’s surprise appearance was revealed in a promo that aired during the 77th Golden Globes ceremony.

Hollywood star Rami Malek says his villain in the upcoming James Bond movie ‘No Time to Die’ is ‘unique and complex.’ The Oscar winner dished out a few details about his character in the film and his experience of working with Britsh actor Daniel Craig on the red carpet of the 77th Golden Globe awards.

Hollywood veteran Brian Cox took home his maiden best actor in a TV drama series trophy for his role on HBOs “Succession” at the 2020 Golden Globe Awards, and the actor said he never expected to win the honour.

Brad Pitt won the Golden Globes for his role in ‘Once Upon a Time in Hollywood’ and took this opportunity to thank his ‘partner-in-crime,’ co-star Leonardo DiCaprio. The actor also joked about DiCaprio’s most famous role as Jack in ‘Titanic.’ The actor said had it been him instead of Rose (Kate Winslet), he ‘would’ve shared the raft’ in the final moments of the period disaster romance.

During his acceptance speech, he said that he wanted to bring his mother for the awards night, but decided against it. “I wanted to bring my mom but I couldn’t because any woman I stand next to, they say I’m dating. It would just be awkward,” he said. 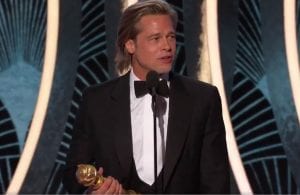 As Pitt made this statement, the cameras focused on Aniston’s reaction, and she was seen laughing just like the rest of the audience.

Meanwhile, actor Kate McKinnon presented celebrated TV host Ellen DeGeneres with the Carol Burnett Award at the 77th Golden Globes and she thanked her for making it easy for people in the entertainment industry to open up about their sexuality.

Hollywood star Russell Crowe won the Golden Globe Awards for his role as Roger Ailes in ‘The Loudest Voice’ and the actor used the platform to share a ‘poignant’ message on climate change amid Australia fires. Actor Jennifer Aniston, who was the presenter for the category, said Crowe was not attending the ceremony because “he is at home in Australia protecting his family from the devastating bushfires.”

Celebrities dazzled at the red carpet of the 77th Golden Globe awards. The ceremony was held at the Beverly Hilton Hotel in California’s Beverly Hills. Priyanka Chopra and Nick Jonas arrived together at the event.