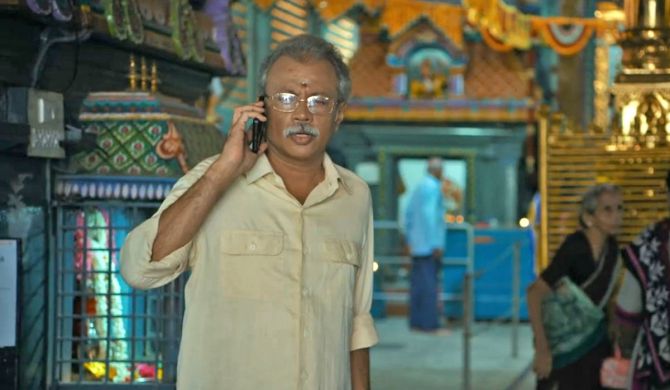 This ordinary, temple-going guy, Chellam Sir, who is a former secret agent has fired the imagination of netizens and ChellamSir memes are going viral

The bespectacled, harmless-looking Chellam is an ordinary, temple-going retired intelligence officer, who pops up now and then in the widely appreciated web series, Family Man 2 to provide critical and valuable information to the protagonist, Srikant Tiwari, played by Manoj Bajpayee.

Chellam has multiple sim cards, which he slyly discards after using it just once to convey special intel about Sri Lankan Tamil rebels to his spy friend Bajpayee. After the Family Man 2 series became a huge hit, Chellam’s character too seems to have wily-nily caught the imagination of netizens and memes on Chellam are flooding the net.

Chellam is played by Chennai-based Tamil film actor, Udayabhanu Maheshwaran, who seems happy with all the national attention that he is getting, according to media reports. Maheshwaran told Cinestaan that he never expected his character to garner so much appreciation from around the country and that people would start sharing things about him on social media.

“This was totally unexpected, it came as a surprise,” he said. However, the actor, who has also acted in Rajnikanth’s Kabali, thought the character was “fun” and people would laugh when they see his scenes.

Maheshwaran’s friends have been forwarding all the memes from WhatsApp and Twitter to him and he has been having a good laugh over them. There is one meme on Twitter, with photographs of scenes of him from the Family Man 2, which goes like this: Only Chellamsir can actually telll you ki PM Cares Fund ka paisa kahan use hua.

Maheshwaran is grateful to the Family Man directors, DK and Raj for giving him this opportunity to shine amid actors like Bajpayee, Priyamani and Samantha Akkinenni. Maheshwaran revealed to rediff.com that he had actually auditioned for the role of Sri Lankan Tamil rebel leader, Deepan in the Famil Man 2 series, which was played by Azhagam Perumal.

This was when casting for the series was on in Chennai. When he didn’t get the call for two months he had assumed that the role went to someone else. Subsequently, Maheshwaran received a call from the team and Chellam’s character was narrated to him on the phone. The role was much smaller but he was keen to act in the popular series and get a chance to work with Bajpayee.

After Chellam, Maheshwaran has been getting a lot of good offers. This small role has brought him national recognition and other offers to act in Hindi films. Family 2 is the second Hindi film, Maheshwaran has acted in. He has also done another cameo in Shoojit Sircar’s Madras Café because he has has known Sircar for a long time and had even written his first film, Yahaan.

Fifty-one-year-old Maheshwaran was a writer-director first. When he was helping out Sircar to cast actors for the south segment of Madras Café, he was asked to do a small role in the film. Coincidentally, he had played a RAW operative who helps the protagonist, an Indian intelligence officer John Abraham. Even today, Maheshwaran’s first love is writing and directing. Acting just happened, he told rediff.com.

Maheshwaran has directed two crime-based films, and when he was preparing for his third one, he got an offer to act in a Tamil film, Moodar Koodam in 2003. On asked whether he will be roped in for the third season of Family Man 2, he told Cinestaan: “Not yet, but if I get a call I will be honoured to be a part of Family Man again”.