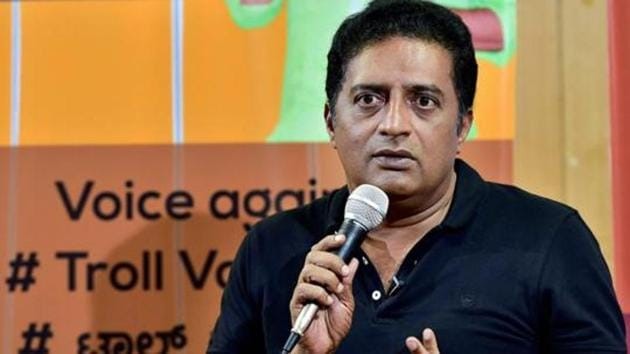 Prakash Raj has alleged that he lost out to Vishnu Manchu in the MAA presidential elections because voting happened on a “regionalism basis, with some categorising him as an outsider – a non-Telugu”. Pic: PTI file photo

The recently–concluded, high-octane polls to elect the office-bearers of the Movies Artistes Association (MAA) had turned ugly and unpleasant with actor Prakash Raj dramatically quitting the apex body of the Telugu film industry.

The 56-year-old senior actor was ostensibly upset with remarks made by the Telangana BJP party president Bandi Sanjay who had send out a note of thanks to the MAA voters for giving a drubbing to “anti-national” elements, after Raj lost to younger actor Vishnu Manchu in the race for the president’s post.

In fact, the BJP leader had tweeted that this is the “correct lesson” for those who supported the tukde gang wishing to dismantle our nation, he tweeted, after the poll results to the film body were announced on Sunday (October 10) night.

Actor Prakash Raj, known for his anti-BJP stance in politics, and who had been stridently speaking out against the killing of journalist Gauri Lankesh, had campaigned for former JNU student leader, Kanhaiya Kumar in the 2019 elections in Bihar. While, the actor too had stood as an independent candidate from Bangalore Central LS constituency and lost out to the BJP candidate managing to rustle up just 29,000 votes.

The elections for the MAA’s president’s post had indeed turned highly political as Raj, who has been essaying roles as a villain and other character roles in Telugu cinema for the past two decades, suddenly found himself in the position of an “outsider”. Though he was strongly backed by actor Chiranjeevi and his son Naga Babu, there was a concerted campaign to play him up as a non-Telugu.

In fact, Raj has alleged that he lost out to Vishnu Manchu because voting happened on a “regionalism basis, with some categorising him as an outsider – a non-Telugu”.

According to a report in Deccan Herald, the biennial polls in MAA held to install a new panel consisting of president, vice-presidents, secretaries, treasurer and other office bearers etc., was marked this time by an “unprecedented campaign which often turned unpleasant with serious accusations and counter charges”.

Finally, 657 votes were polled for the presidents post, and Vishnu Manchu, son of actor Mohan Babu, won by 109 votes.

But while maintaining that he respects the voter’s verdict, an aggrieved Prakash Raj pointed out that even “nationalism had made its way here”. BJP leader Bandi has congratulated (the other side). “I thought political support was not needed in MAA elections, he told the media.

Moreover, he was quoted by the Indian Express as saying, “But today, these elections that took place, were based on regionalism, nationalism, and my nativity. They have started a slogan of ‘the bylaws should be changed; a person who is not a native Telugu should vote, but should not contest’.

Moreover, Raj was upset that he was told by senior actors like Mohan Babu and Kota Srinivasa Rao to behave in Hyderabad like a guest.

Hence, he decided to remain (in the Telugu film industry) as an invitee, not as a MAA member. Raj went on to add that he was defeated in the (Lok Sabha) elections too but he had not quit politics. He would be only leaving MAA but would continue to act in Telugu films, Raj said.

For the future. We are one. Always. pic.twitter.com/1Frpl8VVpt

Meanwhile, the MAA president-elect Vishnu has told Deccan Chronicle on Monday (October 12) that Chiranjeevi had told him to step aside and let Prakash Raj be elected. But his father was not prepared for such a proposal and they decided to fight the elections. However, on Twitter, Vishnu pleaded with Raj not to take a hasty decision to quit, and be “emotional”. and that success and failure were two sides of the same coin and should be accepted with the same spirit.