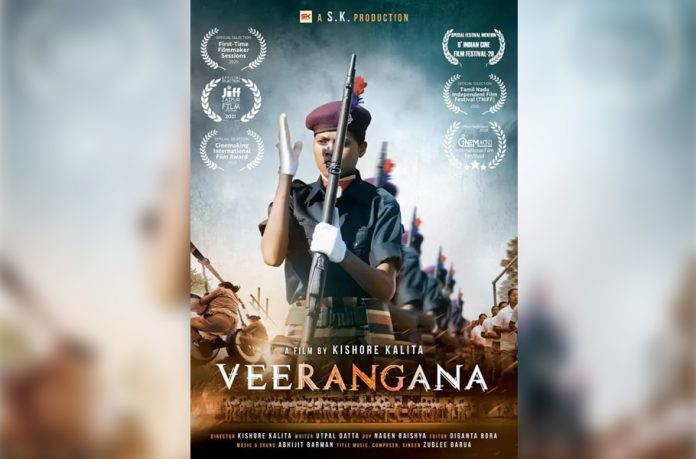 On November 21, on the first day of the 52nd International Film Festival of India (IFFI) in Goa, the Assamese documentary titled ‘Veerangana’, on the country’s first female commando unit was screened. Interestingly, this all-female commando unit, which became a major role model for girls in Assam and the north-east, was formed with the help of training provided by Tamil Nadu.

This female commando unit, Veerangana (meaning women warriors in Assamese), was the brainchild of the current director general of police, Bhaskar Jyoti Mahanta, who back in 2012, was keen to set up a strong female police unit to fight the rising crimes against women in the state.

Mahanta had been the ADGP (Training and Armed Police) at that time and had approached the then DGP Jayanto Narayan Choudhury, to discuss strategies on creating a strong women police force in the state to check growing violence against women on the streets of Assam. It was then they decided to set up Veerangana and send a team of 16 women police personnel from Assam to Tamil Nadu to get trained in ‘Silent Drill’, a unique silent precision exhibition drill in handling a rifle, made famous by US Marines.

“We sent the team to Tamil Nadu because it was also the same time they started providing this kind of training,” says Mahanta in the documentary.

Also read: Support pours in for Suriya amid Vanniyars’ criticism of ‘Jai Bhim’

Often referred to as ‘The Marching Twenty Four’, the silent drill platoon is a 24-man rifle platoon found in the United States Marine Corps. The objective of the unit is to showcase the extreme discipline and professionalism of the Marine Corps. They use M1 Garand rifles weighing about 5 kg and the drill involves rifle spins and tosses. The drill is performed sans any verbal command, with the rifles handled with clinical precision. The only sound heard in this entire exhibition exercise is just the slap on the rifles made by the unit members with their leather-gloved hands.

Besides this exemplary silent drill, which the team displays with .303 No. 1 Mark-IV Rifle weighing 4 Kg 127 gms, the women were also trained in motorbike riding, martial arts and to handle lethal and non-lethal weapons. They were trained at the 3rd Batallion of Tamil Nadu State Police in Veerapuram, near Avadi in Tiruvallur district, some 25 kms from Chennai, for over a year.

The unit was in the news recently as well because Bollywood actress Sara Ali Khan spent some time with these female cops, to prepare for her new film, ‘Mission Frontline’, to be released on OTT platforms.

The 21-minute documentary, ‘Veerangana’, has been produced and directed by Kishore Kalita, an advocate of the Guwahati high court. IPS officers such as Mahanta, Satyaraj Hazarika, who was a Commandant at Batallion Training Camp on Dergaon, Assam at that time and some members of the unit have been interviewed in the documentary. The women officials share how the unit brought out the strength inside them, which they never knew they had possessed, to the forefront. They also talked about the opportunities this opened up for them.

The documentary has been screened at various international film festivals and bagged many awards, including the Best Documentary award in the recent Cochin International Short Film Awards.

The IFFI is conducting the festival on virtual mode for the second time in a year, besides holding the screenings offline at Goa.