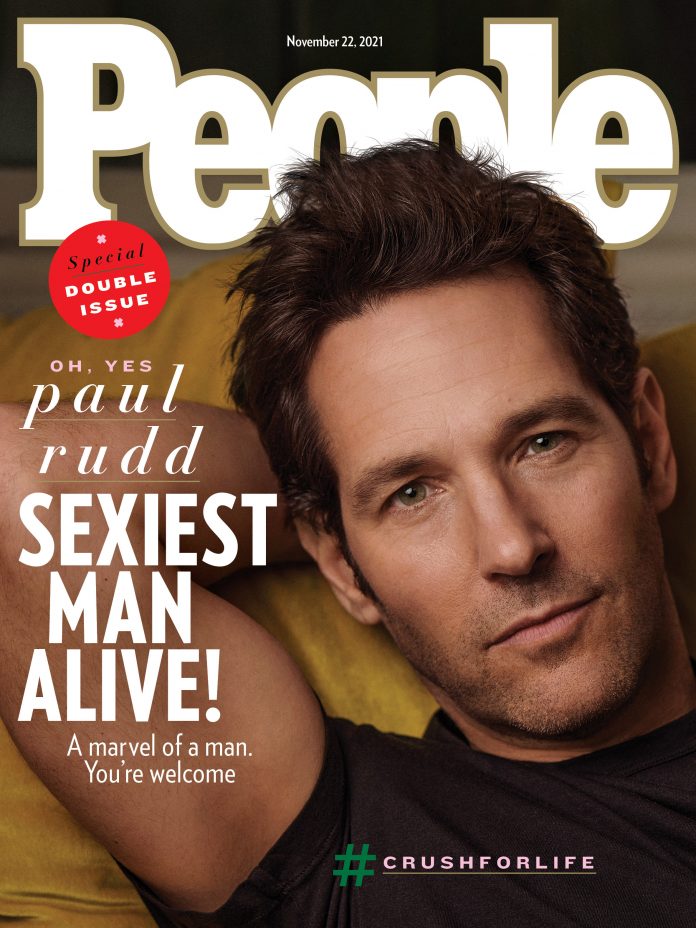 Actor Paul Rudd, who plays Antman in Marvel Cinematic Universe (MCU) movies and has starred in comedies like Clueless and This is 40, has been named People magazine’s Sexiest Man Alive for 2021.

The announcement was made during a comedy sketch on The Late Show with Stephen Colbert on Tuesday.

Rudd said that he is going to “lean into it hard” and not try to be modest about being selected as Sexiest Man Alive.

“But all of my friends will destroy me and I expect them to. And that’s why they’re my friend,” Rudd said.

In the cover story of the magazine, Rudd joked that he has a fair understanding of how people would react to the news.

“I do have an awareness, enough to know that when people hear that I’d be picked for this, they would say, ‘What?’ This is not false humility. There are so many people that should get this before me,” the actor added.

Rudd revealed that when he shared the news of him being selected for the title of Sexiest Man Alive, his wife Julie Yaeger was “stupefied”.

“She was stupefied. But you know she was very sweet about it. After some giggling and shock, she said ‘Oh, they got it right.’ And that was very sweet. She was probably not telling the truth, but what’s she going to say?” the 52-year-old actor said.

Rudd said that he hopes that his life would change after getting the title, and he is looking forward to the day when he would be invited to “some of those sexy dinners with Clooney and Pitt and B Jordan”.

“And I figure I’ll be on a lot more yachts. I’m excited to expand my yachting life. And I’ll probably try to get better at brooding in really soft light. I like to ponder. I think this is going to help me become more inward and mysterious. And I’m looking forward to that,” Rudd added.

Rudd will be next seen in the Apple TV Plus series The Shrink Next Door, which is set to premiere on November 12. He is also looking forward to the release of Ghostbusters: Afterlife.

The actor is also reprising his MCU role of Scott Lang aka Ant-Man in upcoming movie Ant-Man and the Wasp: Quantumania.