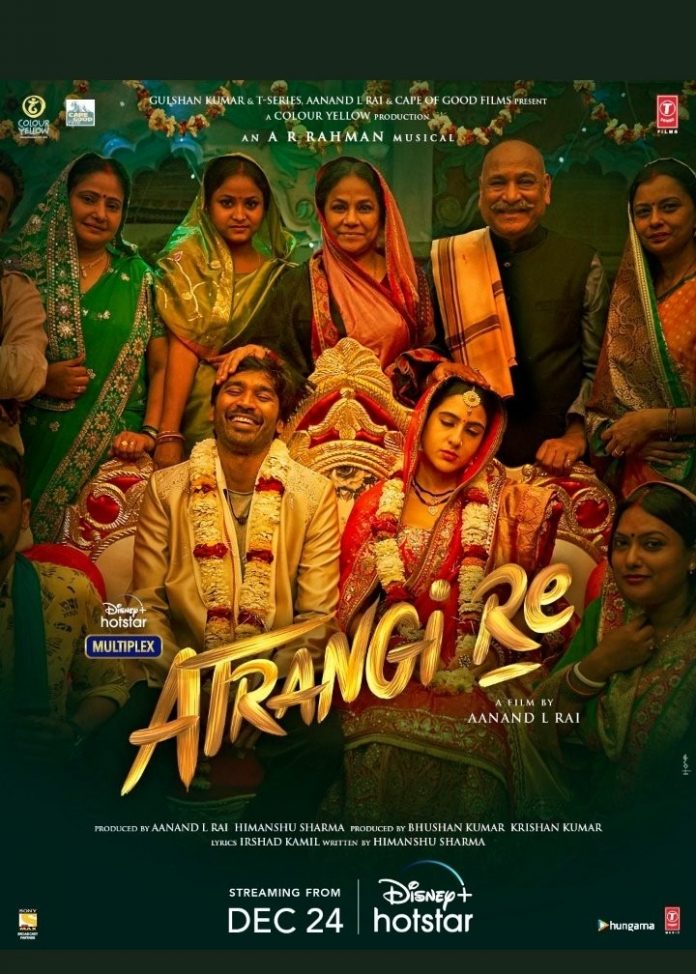 A R Rahman, who has scored music for the film, shared the video of the trailer of Atrangi Re, which released today. Pic: Twitter

Aanand L Rai’s celluloid tale of an unusual kind of romantic love, ‘Atrangi Re’, with Dhanush, Akshay Kumar and Sara Ali Khan, is all set to start streaming as a Christmas release. Meanwhile, the trailer of the film released today (November 23).

In the trailer, Sara Ali Khan’s character, Rinku Suryavanshi, a bottle-smashing, firebrand small town girl, is married off against her wishes to a Tamilian Vishnu (Dhanush). The latter has also been kidnapped to marry the girl. There is a scene where Sara spiritedly tells her newly-wed husband that she has a “chakkar” (involvement) with some other man and tried to unsuccessfully run off with him many times. (a hangover from her real life stepmom’s character Geet in ‘Jab We Met’?)

She is reportedly caught between two worlds, the reality today and the one she lived many aeons ago. There is some mystery there but the director, who describes the title Atrangi re as “funnily weird” is unwilling to divulge everything in this first glimpse of the film. Incidentally, in an interview to the media, he admitted that he was “not heartbroken” that the film is releasing on OTT.

There is a lot of romantic tension that springs up between the lead pair but there’s another hero in the plot, Akshay Kumar, who makes a grand entry on an elephant. He seems to be playing the role of a magician, a (Ram or a Ravan?), who has obviously cast his spell on his much younger heroine. When Dhanush asks his wife with exasperation why she won’t sign on the divorce papers and let him go, she replies that she wants him and Akshay Kumar as well.

Once in a while why can’t a girl get two men, why should that be a disaster, she asks fiercely and in all righteousness. Dhanush is also back in Bollywood playing the earnest, boy-next-door romantic hero to the hilt. He was earlier seen in Aanand Rai’s ‘Raanjhanaa’ cast opposite Sonam Kapoor as the lovelorn Kundan, and this is his second film with the director famous for his Madhavan and Kangana starrer, ‘Tanu Weds Manu’.

Introducing Dhanush in the film, Sara Ali Khan had tweeted prior to the trailer release, “Mileyi Vishu se… Couldn’t be played by any other actor. From National Awards to being called Thalaiva- he makes everyone Khush. Ji haa you guessed it right it’s Dhanush Dhanush Dhanush.”

A R Rahman, who has scored music for the film tweeted that “no matter how unusual or unlikely, love is the tune to which every heart beats”. He also attached the video of the trailer to his tweet.