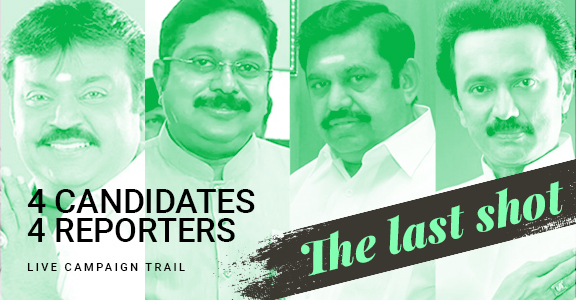 Follow our reporters as they follow four candidates — MK Stalin, Edappadi K Palaniswami, Vijayakant, and TTV Dhinakaran — on the last leg of the campaign trail.

To begin with, Stalin struck an emotional chord with the voters of Thiruvarur, a constituency represented by his late father. It was also a home-coming of sorts to the DMK leader as he sought to wind up his campaign at the place he began his political tour from. Dharani Thangavelu is keeping a tab on his movements and utterances.

Chief Minister Edappadi Palanisamy too was in Salem, his home district, on the last leg of his campaign and sought to impress the voters with his developmental works. N Vinoth Kumar is following the Chief Minister’s last minute poll pitch.

Actor-turned-politician Vijayakant hit the campaign trail just two days ahead of the end of the stipulated poll-campaign period. On the last day he was busy canvassing support for AIADMK-led alliance candidates in Chennai. Even as the “captain” moves around, accompanied by his wife Premalatha, Prabhakar Tamilarasu is in tow.

TTV Dhinakaran too, hoping to upstage both the DMK and the AIADMK, was found campaigning hard in support of his candidates in Chennai on the last day of the campaign. Janani Sampath is keeping a close watch on his assertions in the last moments of the campaign.