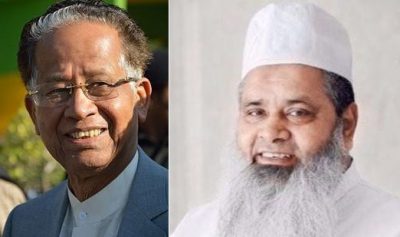 At an election rally in Assam’s Goalpara on April 17, former Assam chief minister Tarun Gogoi appealed to the voters to defeat both ‘chhoto bhai and boro bhai’ (Bengali for elder brother and his younger sibling) in the ensuing Lok Sabha elections. It was a snide reference to Badruddin Ajmal of the All India United Democratic Front (AIUDF) and Himanta Biswa Sarma of the Bharatiya Janata Party (BJP).

For, Gogoi likes to believe and claims that there is a “secret understanding” between Ajmal and the BJP. The BJP, however, likes to call Ajmal a leader of illegal Bangladeshi immigrants. Justifying the BJP’s push for the Citizenship (Amendment) Bill, Assam Finance Minister Himanta Biswa Sarma had in January referred to Ajmal as an example of “Jinnah’s legacy”. But Ajmal, famous outside Assam as the perfume baron and kingmaker in Assam politics, couldn’t care less about such name-calling. This is not the first time that Ajmal, a two-time MP from Dhubri, has been accused of being BJP’s team B or Congress’s secret ally.

So, who is Badruddin Ajmal – a question Gogoi had once dismissively asked — and why is everbody fighting over him?

Dhubri MP Badruddin Ajmal’s rise in politics is a story that has kept the national media mesmerised for long. A native of Hojai in Nagaon, Ajmal also happens to be a scholar from Deoband in Uttar Pradesh and one of India’s richest politicians, courtesy the family business of perfumery.

Ajmal shot to political fame when as president of the Assam State Jamiat Ulema-e-Hind helped the Asom Gana Parishad (AGP) returned to power in 1996. Again in 2001, he played a crucial role in ensuring the Congress’s victory.

His relation with the then Chief Minister Tarun Gogoi soon soured as Ajmal demanded some key portfolios in the newly elected Congress government as a “payback” for his support.

Back in 2005, after the Supreme Court scrapped the Illegal Migrants (Determination by Tribunal) Act, 1983, Ajmal floated the AIUDF to protect the rights of minorities, especially the migrant Muslims (not to be confused with illegal immigrants), who are often lumped into the illegal immigrant category or “Bangladeshi”. He was angry with the Congress for its “indifference” to the Muslims. In the 2006 state elections, the AIUDF made its political debut with a 10-seat win in the 126-member Assembly. In 2011, the party secured 18 and became the second largest party, surpassing the once-influential Asom Gana Parishad, which got just 10 seats.

With Ajmal’s rising influence and the Bengali Muslim-dominated areas tilting towards the AIUDF, Barak valley made it a habit of sorts to vote for the party. AIUDF supporters have no inhibitions in admitting that it was Ajmal in whose name local candidates won elections. A fact that many outside Assam still don’t know is that Ajmal also happens to be a cleric – something that helped the maulana gain people’s unquestioned trust. People often throng his election rallies in hordes to take his blessing. Those returning from his rallies could be seen carrying bottles of holy water “blessed” by the touch of Ajmal’s hand.

However, in the last Assembly elections, the AIUDF came down to 13 seats in the 2016 Assembly elections. And with another poor show in the panchayat election in December 2018, Ajmal’s charisma now seems to be fizzling out.

Political pundits in the state say there are two reasons for Ajmal’s and AIUDF’s slide. Firstly, the party — despite starting its journey as a secular party for all minorities including ethnic tribes — shifted its focus to the Muslim community, tapping into their insecurities. The migrant Muslim population in Lower Assam particularly suffer from anxieties over citizenship in a state where most Bengali-speaking Muslims are suspected to be an illegal immigrant from Bangladesh.

Secondly, early into Ajmal’s rise in the state and the leader “punching above his weight”, the Congress realised how important it was to keep him in check. Gogoi, the political maverick that he is, started underplaying Ajmal’s importance. It had become imperative for the Congress to “win back” its Muslim vote bank that was fast shifting its allegiance to the AIUDF. At the same time, Gogoi knew he couldn’t afford to scare away the Bengali Hindus in Lower Assam, which scared by the rise of the AIUDF, started gravitating towards the BJP. Much before the BJP came to power in Assam in the 2016 Assembly elections, the party made inroads for the first time in the state in 1991 with nine of the 10 seats it won in Barak valley.

Soon, the Congress started balancing its act and Gogoi appealing to the Bengali Hindus in Barak valley. Even though the BJP in Assam now claims to be the champion of persecuted minorities — especially the Bengali Hindus – with its push for the controversial Citizenship Amendment Bill, it was Gogoi, who initially promised citizenship to Hindu Bengali migrants. In 2013, Gogoi, the state chief minister then, had said that he would seek refugee status for people who migrated to India from Bangladesh following persecutions. “This will mean a central law for those who were forced to leave their homes. It will be on the lines of political asylum,” Gogoi had promised.

The long-attached stigma of Muslim appeasement was the main reason a “secular” Congress didn’t want to be seen having direct links with the AIUDF. The grand old party rather started asserting its secular credentials and banked on its own Muslim candidates like Abdul Khaleque and Abu Taher Bepari.

A couple of months back, speculation was rife about a Congress-AIUDF alliance. It was rumoured that Gogoi wanted an allianace with Ajmal for the Kaliabor seat for his son and sitting MP Gaurav Gogoi. (The Kaliabor Lok Sabha constituency has 31.33% Muslim voters, according to Census 2011.)

Gogoi, of course, denied the development. “There is no possibility of an alliance with AIUDF. “Some are saying it is for my son that Congress wants to garner support from Ajmal. In the 2014 Lok Sabha elections, Gaurav won 2.32 lakh votes and defeated the BJP candidate. I am confident of our win this time as well, not just from Kaliabor and Silchar, but also from the three other seats,” he had said.

Ajmal, on the other hand, reached out to the Congress for an understanding in the polls to stop BJP in the 2019 Lok Sabha elections. He maintains that the AIUDF is more than eager to help, provided the Congress wants its support. “We can sacrifice anything, even our electoral prospect, to stop the BJP,” says Ajmal.

The fact that the AIUDF is contesting from just three seats — the Barpeta (Hafiz Rafikul Islam), Dhubri (Ajmal) and Karimganj (Radheyshyam Biswas) – added grist to the rumour mills that there is a tacit understanding with the Congress.

Gogoi and his partymen, however, allege that it’s a BJP propaganda. “We clearly deny the rumours as no secret alliance is possible between the two parties. The Congress will never shake hands with any communal party. Just like BJP, AIUDF is also a communal party for us. Moreover, in previous elections, AIUDF has always been working as a B team for BJP,” said Assam Pradesh Congress Committee spokesperson Rituparna Konwar.

While it’s difficult to say who has a tacit understanding with whom, a similar scene had played out even during the 2016 Assembly elections. “Both the Congress and the BJP kept accusing each other of taking Ajmal’s help to come to power. Both parties believed AIUDF would play a kingmaker’s role,” said political commentator Dilip Patgiri.

But much water has flowed down the Brahmaputra since 2016, when the BJP eventually came to power in Assam on its promise of flushing out illegal immigrants and bringing a controversial citizenship law.

In 2019, Ajmal is no longer seen as a kingmaker. Nor is the scent of his perfume considered strong enough to fire up the political imagination of voters.