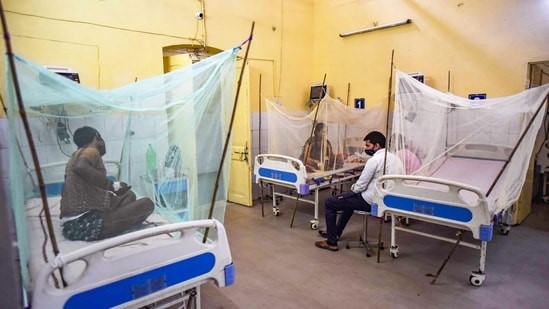 Dengue patients at a hospital ward in Prayagraj in UP. Pic: PTI

As the challenges of the COVID-19 pandemic continue to hover like a darkening cloud in the horizon, India is now facing the biting task of dealing with a new deadlier dengue virus – DENV-2 – which is probably behind the mysterious fever outbreak in UP that had claimed many lives, including that of 40 children.

This dengue virus is leading to a sharp spike in infections in 11 Indian states, including Kerala, Telangana, Maharashtra, Uttar Pradesh and Odisha in the past one and a half months. It is not uncommon in India for the monsoon season to bring this mosquito-borne viral illness but this year, for some reason, dengue cases have significantly shot up baffling medical researchers and authorities alike.

Dengue, described as the “most important mosquito spread viral disease and a major international public health concern”, by the National Centre for Disease Control (NCDC) and the World Health Organisation (WHO), is found mostly in tropical and sub-tropical climates and is prevalent mainly in urban and semi-urban areas, said media reports.

According to health officials, there are four serotypes of the virus that cause dengue or DENV and that is DENV-1, DENV-2, DENV-3 and DENV-4. But it is the DENV-2 or the strain D2, which is considered to be the most severe and can even lead to fatal internal bleeding and shock. And, DENV-2 is the one that is currently circulating in India, especially in these 11 states, where the illness is adopting a more severe form leading to more deaths, said a Times of India report.

Balram Bhargava, Director-General of the Indian Council of Medical Research (ICMR), too told the media that the strain is particularly virulent and capable of inducing mortality. He added that it was one of the reasons behind the mysterious fever which had hit the western UP districts of Firozabad, Agra, Mathura and Aligarh and led to the deaths of many people last month.

This unusual surge in dengue cases across states, especially UP and Kerala, which have also seen a higher volume of people, especially children being hospitalised and even succumbing to the disease, has been attributed to the D2 strain of the mosquito-borne virus. D2 can spread fast, and is associated with severe and more intense symptoms that can become fatal if not treated on time.

Is the new dengue variant as serious as COVID-19? 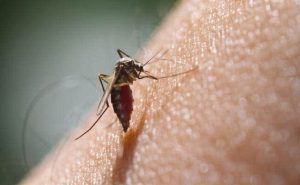 While coronavirus variants are believed to spread rapidly through respiratory droplets and cause pre-symptomatic illness, dengue infections are spread through bites of virus-carrying mosquitoes. But, the current variation, DENV-2 can spread fast as well, cause severe illness and mortality if not managed well, said a News18 report. More so, the DENV-2 can be threatening for someone who has been previously infected by one dengue serotype, and then gets infected by this variant.

With COVID-19 pandemic still prevalent in the country, dengue symptoms should not be treated lightly, said media reports quoting health officials. However, they have suggested to be watchful since both the infections cause a host of overlapping symptoms and and some notable differences.

Dengue produces flu-like symptoms and lasts for 2-7 days, while the incubation period for the disease is usually 4-10 days after the bite of an infected mosquito, said WHO. While the US Centres for Disease Control and Prevention (CDC) lists high fever accompanied by “at least two” complaints like headache, pain behind eyes, nausea, vomiting, swollen glands joint, bone or muscle pains, rash as classic dengue symptoms.

For people suffering from severe dengue, WHO warns that they can experience severe abdominal pain, persistent vomiting, bleeding gums, vomiting of blood, rapid breathing, fatigue/restlessness. Moreover, the global health body advised that once severe dengue is suspected, the patient “should be rushed to the emergency room or to the closest health care provider” since it can send a a patient into shock through plasma leakage, severe bleeding and severe organ impairment, said a News18 report.

COVID symptoms, depending on whether it is mild, moderate or a severe infection, involve fever, chills, cough, cold, sore throat, difficulty breathing, headache, myalgia, intense fatigue and weakness – all of which could be present with dengue in different ways.

However, clear-cut differentiators for COVID remain loss of smell and taste and other upper respiratory tract inflammation signs, or even shortness of breath, chest pain or breathing issues. These symptoms are however not present in dengue, said experts. Instead, dengue can often start with the onset of a headache or weakness, which may not always be the case if you have been exposed to COVID-19, said the TOI report.

What is the treatment for dengue?

No vaccines or specific treatments for dengue and patients are available and the patients have to depend on how the symptoms are managed. Hospitalisation may be required in some cases, but most people recover well in time, if symptoms are properly diagnosed and treated.

“Patients should seek medical advice, rest and drink plenty of fluids. Paracetamol can be taken to bring down fever and reduce joint pains. However, aspirin or ibuprofen should not be taken since they can increase the risk of bleeding,” WHO has advised.

Further, WHO pointed out that proper medical care and early detection can keep case-fatality rates below 1 per cent, but noted that the “the overall experience remains very discomforting and unpleasant”.