As India gears up to reopen more public transports including Metro trains after a prolonged lockdown, a study has revealed that coronavirus can spread rapidly in a closed setting like that of public transport.

The study, conducted in China’s Zhejiang province, has found that a coronavirus-infected person travelling in a bus carrying Buddhist pilgrims had passed on the infection to 23 out of the 67 co-passengers.

The findings are published in the latest edition of the JAMA Internal Medicine, a journal of the American Medical Association.

The spread occurred through air-conditioning vents in one of the two buses that carried a group of 128 people who visited a religious event in eastern China on January 19 this year.

The super-spreader, whose gender was not specified in the study, had no symptoms such as fever or cough at the time of the travel. None of the passengers was wearing a mask because there was no such awareness in the initial weeks of the virus outbreak. That time, masks were not yet made mandatory in China or anywhere in the world.

It was found that those who rode a bus with “air recirculation” mechanism and poor ventilation with the asymptomatic Covid-19 patient as a co-passenger had an increased risk of getting infected compared to those who travelled by a different bus.

“The airborne transmission may partially explain the increased risk of SARS-CoV-2 infection among these bus riders,” the authors of the study said.

These results suggest that future efforts at prevention and control must consider the potential for airborne spread of the coronavirus which is a highly transmissible pathogen in closed environments with air recirculation. 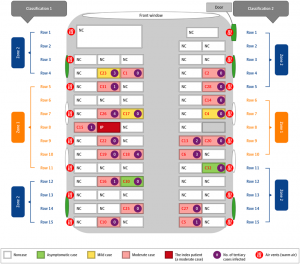 Out of 68 passengers on the bus, in which the asymptomatic patient was travelling, 24 tested positive while none of the 60 individuals in the other bus was infected.

“We divided the seats on the exposed bus into high-risk and low-risk zones according to the distance from the source patient and compared Covid-19 risks in each zone. In both buses, central air conditioners were in indoor recirculation mode. Airborne spread of SARS-CoV-2 seems likely to have contributed to the high attack rate in the exposed bus,” the authors of the study, Ye Shen, Changwei Li, Hongjun Dong and others, said.

Significance of the study

The significance of this study is that it provides yet another evidence supporting the potential for an airborne transmission route of the novel coronavirus. The passenger mapping showed that the sickest people were in the front and back of the bus, outside the perimeter of one-two metres (three-six feet) that infectious droplets are believed to travel.

“The investigations suggest that in closed environments with air recirculation, SARS-CoV-2 is a highly transmissible pathogen,” the report said.

The study also provides proof that maintaining six feet distance may not be enough to prevent the infection, especially in poorly ventilated spaces. The researchers say that the spreading of the virus in the bus adds to the evidence that Covid-19 is spread by tiny particles that can linger in the air, particularly in recirculated ventilation systems.

Related news: WHO takes note of ’emerging evidence’ on airborne spread of COVID-19

In a similar investigation of an outbreak cluster in the southern Chinese city of Guangzhou, the virus was found to have spread between diners’ tables more than one metre apart at a restaurant where three families had dined on January 24.

One person who had come from Wuhan developed a cough later that day and tested positive, and by February 5, nine other diners tested positive. The study, published in US Centers for Disease Control and Prevention’s journal, Emerging Infectious Diseases in April, found that the airflow direction was consistent with droplet transmission.

In early April, a high-level US scientific panel was the first to flag that the Sars-CoV-2 is airborne and could stay suspended in air in the ultrafine mist produced from normal breathing.

Asymptomatic and pre-symptomatic spread of infection – studies show people are the most infectious one to two days before developing symptoms – further raise the risk of people infecting others in crowded public transport, such as buses and metros.

“For buses, we must have thermal screening, spaced seating, compulsory masks, supervised boarding from the back and de-boarding from the front and open windows. A similar protocol is a must for metros as well,” said Dr K Srinath Reddy, president, Public Health Foundation of India.

Simple masks are the best strategy, followed by safe behaviour. “Mandatory masks, and not riding if you have a cough, cold, fever or were in contact with a positive person are obvious precautions. Older adults, people with cancer, chronic diseases or compromised immunity, must avoid crowded buses and metros even with protection,” said Dr Nageshwar Reddy of the Hyderabad-based AIG Hospitals.