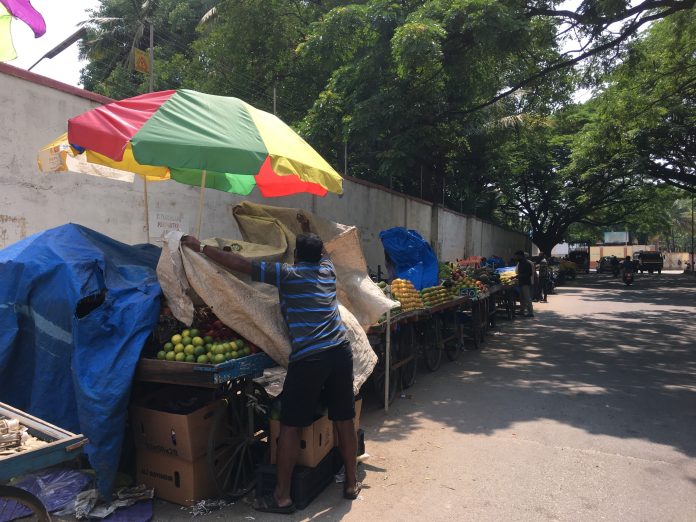 The COVID-crisis has devastated the lives of many. Some who lost jobs turned to vegetable vending, and some have turned to sell breakfast on the roadside

On weekdays, Ameer Ahamad, 38, a bachelor of art (BA) and bachelor of education (B Ed) graduate from Ballari, works as a helper in a budget restaurant in Bengaluru. Ahamad joined the restaurant in March after the COVID crisis left him in a lurch.

Occasionally, much to the surprise of the customers, he speaks fluent English. If a customer is friendly and strikes a conversation, he briefly narrates his story with a hope that someday, somebody might help him to find the right job.

When the pandemic hit the country last year, Ahamad was employed full-time as an admin supervisor at Jai Bharat Technical Services Pvt Ltd, a unit of JSW Steel, in the mining-rich Ballari region. In June last year, the JSW Steel plant emerged as one of the biggest COVID clusters in the state. In the company’s township, the total positive cases reached over 500 in a span of 40 days after the first case was reported in early June.

Ahamad was one of the employees affected by COVID. Though he got admitted to the hospital run by the administration and recovered, the COVID left him in a difficult situation. His wife and family deserted him and feared to come near him, he says. “My wife and kids left for their maternal home and never returned even after my recovery. Since I contracted the virus while at work, they thought my job was risky and feared coming back home,” he said. “Besides, the apartment we stayed in was sealed off by the administration.”

As there is a lot of fear and stigma surrounding COVID-19 in India, people who contract the illness are shunned, and many are afraid to go near them. Ahamad’s experience has been something similar. “When I went to pick up my family members, I was given an ultimatum – either to choose family or the job. As a father of three, I chose to be with the family and quit the job last December,” Ahamad says.

After quitting the job, he came to Benguluru with ₹30,000 in cash, a smartphone, and a pair of clothes to try his luck in the vegetable trading business. But he was cheated by a trader in the business, who to add salt to the injury took away all his belongings and abandoned him on the outskirts of the city.

“I walked for two days to reach the city. I first went to the police station in Hulimavu and informed my family members that I was alive. Though I wanted to file a complaint, the police refused to do so since I did not have my mask,” he narrated. Then he hunted for jobs. An auto driver he did not even know helped him to get a job in a hotel. Ahamad didn’t mind any job as long as it helped him to survive.

With the hotelier giving him salary and a place to stay in a dormitory and free food, Ahamad thought it was enough for him for the time being. But within two months, the lockdown was announced when the second wave of the pandemic struck. “How can I demand for my salary when I can see the business is down completely and my owner is struggling to keep it afloat. I was thankful that I had a place to stay and I was getting food,” he said.

His earnings had dropped from ₹28,000 a month to ₹9,000 in a year’s time because of his job switch. He had harboured dreams of landing a job in Qatar through his friend and had even given interviews. But all that came crashing as the second wave started. With a specially-abled child at home, Ahmad said that he had to keep himself alive to feed them and send them to school.

“Even when I lost all my belongings, I did not beg. I only asked people on the street that I met to give me a job so that I can earn and eat,” he said. Today, Ahamad’s hopes are  pinned on finding a  relevant job soon and to get back on track soon.

The COVID-crisis has devastated the lives of many. Some who lost jobs turned to vegetable vending, and some have turned to sell breakfast on the roadside. That’s the only business people feel they can resort to during COVID. The distress is evident on the streets with restaurants and the commercial streets in the city.

In another area, Vinodh Sarangapani, a hotelier, whose business generated ₹3000-₹4,000 a day before COVID, shut his venture last June following the lockdown imposed in the first wave of the COVID-19 pandemic. Sarangapani used to run a hotel on Sarjapur Road, serving 20 people at a time.

As a small businessman, Sarangapani’s business was dependent on the floating population in the city who spent ₹50-₹100 a meal. He could not sustain his restaurant only on online orders. Hence, he shut his food business and tried his hand in security and housekeeping management consulting. He failed at it as he could not match the demand and supply in the market with migrants leaving the city and many apartments denying entry to support staff.

Now, to keep the family running, he’s turned to selling breakfast near his home since June this year. “With house rent to pay, and two school-going kids, I need to earn something,” he says. He rented a room and cooked breakfast in the pathway leading to the house.

Despite the civic body relaxing lockdown rules since June 14, he says nothing much has changed as he feels people still fear coming out to buy food. Many of his customers are in the low-income category whose purchase remains ₹30-₹50 with each order. “I never thought I would end up like this. But what other choice do we have?” he asked, even as his financial situation worsens by the day.

Small and medium-sized businesses and people working in the unorganised sector have been hit badly too. While many thought they could sail through the crisis and take loans to survive the first wave, the second wave and the subsequent lockdowns have dented their any hopes of doing business and generating any income.

Nagendra Rao, 26, a second-generation businessman managing his father’s tailoring business, ran a small boutique in New Thippasandra. The rent for the shop was fixed at ₹40,000. “I got no relaxation amid the crisis. The owner told me to shut the shop if I can’t afford to pay the rent,” he said. With people spending less on clothing and no marriages being conducted, Rao is struggling to keep the business afloat.

It’s the fixed costs that are worrying him. Before COVID, he says his turnover was about ₹7,000-₹10,000 a day. And it dropped to half the level post the first wave and now it is completely zero. Rao is frustrated that the government is allowing other shops (like hardware, food, garment factories) but not apparel. As a means to make a parallel income, his family had constructed a house to be able to rent it out. But with the real estate market seeing a downturn that plan too failed to come to his rescue.

“We had potential to earn an income of ₹1 lakh through house rent. So we borrowed a loan and built an apartment. While we have to pay ₹65,000 as EMI for the house, our rental income dropped to a mere ₹30,000,” Rao explained. “Even if the government completely opens up, it would take at least three to four months to get back to normalcy. But we are not sure if we can sustain till then,” he added on a sombre note.