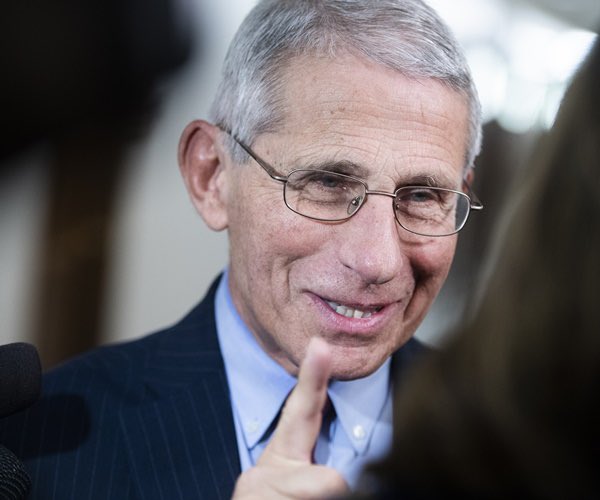 According to to the top infectious expert, Anthony Fauci, the US may well be on the "threshold" of COVID-19 becoming an endemic. Pic: Twitter

Omicron will not spare anyone and it is bound to “find just about everybody”, said the top US infectious disease expert, Anthony Fauci at a virtual talk.

According to Fauci, it was highly unrealistic to believe that we could wipe out COVID-19 and added that Omicron with its “extraordinary, unprecedented degree of efficiency of transmissibility, will ultimately find just about everybody”. There is no way we are going to eradicate this virus, he reiterated, taking into account “its contagiousness, its propensity to mutate into new variants and the large pool of unvaccinated people”.

Speaking at a virtual chat with the Center for Strategic and International Studies (CSIS), the chief medical advisor to the President of the United States pointed out that people who had taken their COVID-19 vaccines will no doubt be safeguarded against any severe outcomes. Those who have been vaccinated “very likely, with some exceptions, do reasonably well,” and avoid hospitalisation and death, said Fauci.

But those who are still unvaccinated will get the brunt of the severe aspect of this omicron surge. And, though it may appear to be less severe on a case-by-case basis, when you quantitatively have so many people who are infected, a fraction of them … are going to die,” he said, according to reports in international newspapers.

However, even as the Omicron cases spike and fall, the US, he hoped, would move into a new phase in which the entire community will be protected and there will be adequate drugs that are available to easily treat someone when they are infected, even when they belong to a high risk group.

When the country reaches that stage then that will be the transition stage, he said. According to Fauci, the US may well be on the “threshold” of COVID-19 becoming an endemic. But they have still not reached that point as yet since they were recording almost a million infections a day, nearly 150,000 people in hospital and more than 1,200 daily deaths.

Earlier, during a White House briefing, the National Institute of Allergy and Infectious Diseases director had warned people against getting complacent about the Omicron variant of the coronavirus. Fauci believed that since the Omicron is so contagious it could strain the hospital systems with the sheer number of cases. Moreover, a certain proportion of that large volume of cases was going to be severe, he pointed out.

It has become evident now that though Omicron causes severe cases at a lower rate than Delta, it is reaching more people because of its extreme infectiousness.