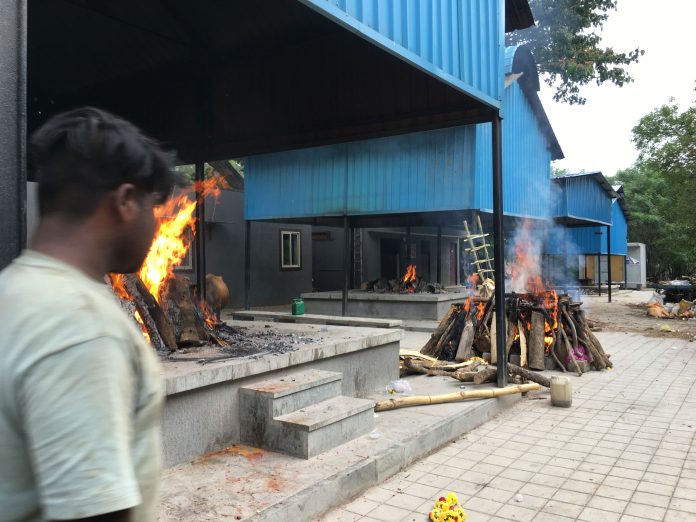 Crematoriums are running out of space and bodies being burnt outside the pyre slabs in Bengaluru.

It’s 4 pm on Friday (April 23). Rakesh Somaiah, 36, a software engineer in Bengaluru, waits at the Bowring and Lady Curzon Hospital convincing healthcare staff to allocate a bed for his 93-year-old grandmother Gowramma.

Along with him, three other patients are in the queue seeking COVID treatment. The nursing staff at the counter analyse if there’s a need for hospitalisation. One patient breathes heavily even as he sits in the chair. The healthcare staff responds to his attendees, saying there are no beds available.

The patient’s attendees, who did not wish to be named, say the person’s health deteriorated with each passing minute. It took them three days to get the COVID results in a government lab.

“The civic body did not even call to inform us the results. They put it out on a notice board outside the testing centre saying ‘negative’ after three days. But independent CT scans reveal otherwise and we wasted precious time thinking it’s not COVID,” the attendee said.

Somaiah’s next in line, waiting. He says his nightmare started on Thursday (April 22)  around 7 pm when Gowramma complained of breathing difficulty and had a mild fever. While she stayed with her uncle, who also had similar symptoms, Somaiah was there to help them.

“Since last (Thursday) night, I visited 35-40 hospitals in the city before reaching Bowring Hospital. From private chain hospitals to nursing homes and government hospitals, all had one answer: no beds available,” says Somaiah.

“If I call for an ambulance, they ask if I have a confirmed bed. And if I try to get one by calling the government helpline, there’s no response.”

His grandmother got treated in the emergency ward and was sent to the COVID ward later. In her case, the nursing staff could at least attend to her and give immediate oxygen support in the medical triage room that was empty. Gowramma’s oxygen saturation level dipped to 52 and she desperately needed ventilator support. But she hasn’t been allocated a bed yet.

Somaiah says he must have tried the government COVID helpline number (1912) at least a hundred times between April 22 evening and April 23 noon. “Even the Airtel customer care agent would pick up the call after a long wait, but no one on the government helpline in case of an emergency.”

While the government live-updated hospital beds status showed five beds out of the allocated 130 beds were available, Soumya DM, a nursing officer at Borwing, said the latest data is not reflected on the site and they have no empty beds. She gives another hospital numbers to patients’ attendees so that they could search.

“All beds are full… there are already four more patients in waiting and we are trying to do our best,” Soumya says.

As Somaiah speaks, his eyes look red with lack of sleep, and he holds back his grief as the system is failing him.

While he’s thankful that he has a car and he could move around with his grandmother in search of a hospital bed, he doesn’t have an oxygen cylinder, so the car may not be Gowramma’s lifeline for long.

When he first walked into a private hospital (North Bangalore Hospital), they did not do an RT-PCR test for COVID because the results might take 48-72 hours to get. Instead, they did a rapid antigen test and the results showed negative. So Somaiah and his family members heaved a sigh of relief that it was not COVID.

But Gowramma’s breathlessness increased by the hour. And with family members who she lived with a week ago, falling sick and searching for beds in another corner of the city, Somaiah connected the dots and thought she must be having COVID and started to look for hospitalization before he endured horrific 14 hours. When she was taken to the emergency ward at Bowring, the doctor took scans and X-rays to confirm if she indeed had COVID and if it had affected the lungs.

In the emergency ward, Somaiah says patient’s attendees were left to take care of them. “Won’t I catch the virus when I have to take care of her in the ward? I have a kid at home and I’m scared,” he says.

The tall claims of the government that they are handling the situation well fall flat if one sees the condition in the hospital. And despite being a techie, in a connected world, with so many people volunteering for help and sharing resource files on social media platforms, Somaiah felt helpless as nothing worked.

“When there are no resources available, what is the point if all those excel sheets and google docs lead to no solution?”

People like Gowramma and are caught in a vicious cycle.

If lucky, get an RT-PCR test done and get the results in 24-72 hours. And if the results come positive, look for a hospital bed. If no beds are available, no ambulance service will  come for help. Those who manage to get hospitalised face the struggle for oxygen or medicines. If they are lucky, they get treated and go home. If not, hope is their only support.

With long queues at the testing centres, the government passed an order on April 23 saying labs should maintain a separate facility for senior citizens and pregnant women. It even ordered hospitals not to demand COVID negative certificates to treat non-COVID patients.

As the second wave rages across the country with over 3.3 lakh COVID cases a day on April 22, Karnataka too witnessed a surge with nearly 27,000 cases on April 23 with a positivity rate of 15.19%. While the government record shows there are 9,661 beds available in Bengaluru, 75% are already occupied with only 2,471 left and only 11 ICUs left in the city as of April 23 at 11 pm. But the ground reality is far from different from what the data says as several private hospitals show full-bed occupancy.

The New Indian Express reported that with the hospital bed unavailability in Bengaluru, people were now booking beds in neighboring Mysuru, about 150 km away. But the bureaucracy is worried that people in critical conditions are reaching Mysuru and the death numbers are increasing there, which should ideally be counted in Bengaluru.

With a spike in cases, the state government has passed an order saying there are 80% of beds and ICUs to treat the infected patients. But it put stress on the health infrastructure where non-COVID patients were made to suffer. Long queues were seen at several hospitals’ entrances with patients waiting to get first aid and medical consultation.

Outside the post-mortem section in Bowring Hospital, four ambulances waited with bodies wrapped in blue plastic bags and kept inside. In another hospital, C V Raman Nagar hospital, a staffer, who was to hand over the body to relatives, was seen telling them that if they go to the nearby electric crematorium, they would have to wait for 18 hours, suggesting them to opt for a burial, the clearance for which he said will take half-an-hour with extra Rs 5,000. The relatives of the deceased agreed with no choice.

“In two days, we burnt nearly 49 bodies. This is besides the COVID ones. We have only four slabs for the funeral pyre. But we created one extra and burnt some bodies on the ground. I have never seen such busy days,” said Bhaskar V, in charge at the Kalpalli Cemetery and Crematorium.