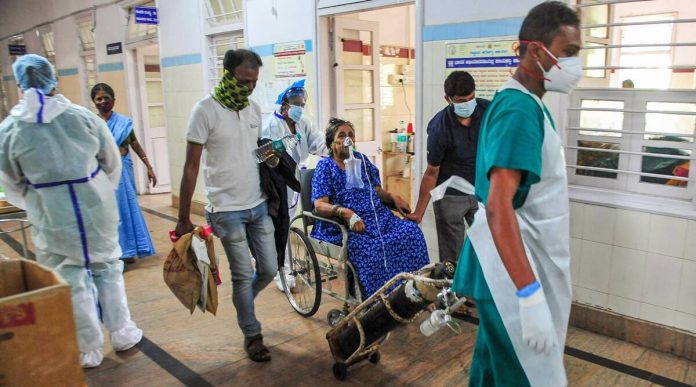 A COVID patient on oxygen support at a hospital in Bengaluru. PTI File Photo

The Supreme Court on Friday (May 7) rejected the Centre’s plea against the Karnataka High Court order, asking it to raise oxygen supply to the state for COVID patients.

“The Karnataka High Court order is a careful, calibrated exercise and we see no reason to entertain the Centre’s appeal,” ruled the apex court. “We cannot leave the people of Karnataka in the lurch.”

The Centre on May 6 urged the Supreme Court to “urgently” put on hold the ruling, asking it to increase daily medical oxygen allocation for Karnataka to 1,200 MT. Solicitor General Tushar Mehta said the state was being supplied 965 MT oxygen, adding there was “no rationale” to that order.

“It would lead to chaos in the management and distribution of oxygen across the country,” said Mehta.

The Centre argued, “If every High Court starts passing such orders, then it will be unworkable. Madras, Telangana and other High Courts are also examining the same issue. Let High Courts distribute oxygen to states. We have a limited quantity and we can sit together.”

Mehta said the Centre was ready to sit with Karnataka and resolve it. Justice D Y Chandrachud remained unmoved. “It is an extraordinary well-calibrated exercise by the High Court,” he said.

The Supreme Court said it would “interfere” at an appropriate stage. On May 6, Karnataka Karnataka reported 49,058 fresh infections and 328 deaths.

Before taking up the Karnataka case, the Supreme Court ordered the Centre to supply 700 metric tonne of oxygen to Delhi every day “till further orders”.

“When we say 700 metric tonne, it means (the amount of medical oxygen to be supplied) every day to Delhi. Please do not drive us to a situation to take coercive steps. We are clarifying that it will be 700 MT every day,” the top court had said, a day after prolonged arguments in the court.

Delhi government lawyer Rahul Mehra on May 7 told the court that the city received 527 MT oxygen by midnight and 89 MT by May 7; 16 MT was on the way, he added.

“On May 6, we noticed a lot of caveats on tankers. We are not going into this… we are not drivers,” Justice Dhananjaya Y Chandrachud told the Centre.

The top court said it had constituted an expert panel to conduct an oxygen audit to understand the need for oxygen for every state.

On May 6, the Supreme Court had made it very clear: “You will have to give 700 tonne to Delhi”.

“If nothing is to be hidden, let it come before the nation how allocation/distribution is done transparently by the Centre,” the court said, adding, “the Centre continues to be in contempt for not supplying 700 tonne of oxygen to Delhi.”

Where does India’s vaccination drive stand at the 5-month mark?