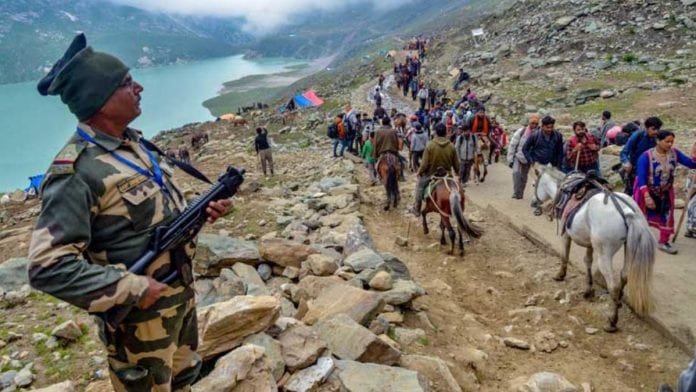 Civil society groups are angry, arguing that while the authorities have imposed strict restrictions in Kashmir for the locals, they have not cancelled the Amarnath pilgrimage. | PTI File Photo

The Jammu and Kashmir administration has enforced an 84-hour-long “complete lockdown”, beginning April 29, in 11 districts of the region with the aim to flatten the COVID-19 curve.

The curfew will come into effect from Thursday (April 29) evening and remain in force till Monday (May 3) morning. Simrandeep Singh, secretary of the Disaster Management Relief, Rehabilitation and Reconstruction Department, said 11 districts, including Srinagar, south Kashmir’s Anantnag, Pulwama and Kulgam, north Kashmir’s Baramulla, central Kashmir’s Budgam and Ganderbal, Jammu, Kathua, Udhampur and Reasi will be under curfew.

J&K Police (Kashmir Zone) while quoting the Inspector General (Kashmir Range) Vijay Kumar said: “During the #LockdownPeriod, all the #Police Units have been directed to ‘facilitate hassle free Movement of Doctors, Health Workers and Essential Services’. For any assistance #Dial-112.”

Prior to the imposition of the lockdown the authorities had imposed Section 144, which bars assembly of more than four people, within the municipal limits of Srinagar district “to contain further spread of COVID-19”.

The administration in its COVID-19 media bulletin issued on April 28 said that J&K logged as many as 3,023 new positive infections and 30 deaths. Of these, the Kashmir Valley recorded 2,034 new cases and 18 deaths while the Jammu province reported 989 cases and 12 deaths.

One of the biggest challenges in the Kashmir Valley is the capacity of government and private hospitals to deal with the emerging crises. Health professionals and experts sound alarm while urging the people to strictly adopt what they refer to as the “COVID-appropriate” behaviour. There is also shortage of vaccines in J&K. Signboard at major hospitals say: “No vaccine available.”

Dr Aadil Ashraf, gastroenterology fellow at Srinagar’s Sher-i-Kashmir Institute of Medical Science (SKIMS), told The Federal: “The second wave of the COVID-19 pandemic hit us badly and caught us unawares, as the infection has already spread in the community. This was not the case during the first wave due to our anticipation that something was going to hit us.”

“A month back we were celebrating while thinking that the COVID-19 pandemic was over as if we had won the battle. The difference between the two waves is with regards to preparedness, acceptance and anticipation. Only two weeks before, the daily infection cases in J&K had dropped to below 100 but now we are witnessing a massive spike in the number of cases and deaths. We will have massive numbers of infections and it is least surprising.”

Dr Yasir Wani, another prominent health professional and consultant paediatrician with J&K Health Services, echoed the views expressed by Dr Aadil. “India recorded its first case of coronavirus in January 2020. By September 15, the first wave had peaked and the number of daily cases jumped to 98,000. Then there was a gradual decline. A lull followed for the next four months or so,” he said.

“Everyone got relaxed and complacent and thought that the war against the pandemic had been won. There was also COVID fatigue. Lesser number of people wore face masks while physical distancing norms went for a toss. Politicians started addressing massive election rallies, the new edition of the cash rich Indian Premier League began and religious gatherings [such as the Kumbh Mel] attracted large crowds.”

Both doctors emphasised the need for mass vaccination, strict adherence to physical distancing, COVID-appropriate behaviour, wearing of surgical and N-95 masks, regular hand washing and self care. They said that the new mutant was far more lethal than the first and infected more people.

Many imams, khateebs and ulemas (head priests, sermonisers and scholars) in Kashmir have urged Muslim worshippers to say their mandatory prayers at home to avoid any religious gatherings inside mosques and shrines during the holy month of Ramzan. In several mosques such announcements are being made through the public address system, while some religious clerics have made short videos in this regard to amplify the message of necessary precautions.

In the first 10 days of Ramzan, many worshippers preferred offering Tarweeh (special night prayers) inside mosques. Chief executive officer of J&K Waqf Board Farid-ud-Din made a passionate appeal to imams and sermonisers of the mosques and shrines to encourage people to offer prayers at home.

Meanwhile, the J&K administration is under fire for throwing open a tulip festival at Asia’s biggest garden in Srinagar, Khelo India sports programme in the valley of Gulmarg in north Kashmir, musical concert at Srinagar’s alcove of almonds (Badamwari), fashion shows and other tourism related activities. All such activities became a source of attraction for tourists from places like Gujarat and Maharashtra, eventually ending up as super spreaders of the virus. Besides this, the testing process at the Srinagar airport was not up to the mark.

On March 24, Prime Minister Narendra Modi in a series of tweets had thrown open the tulip garden to encourage tourists to visit it in good numbers. “Whenever you get the opportunity, do visit Jammu and Kashmir and witness the scenic tulip festival. In addition to the tulips, you will experience the warm hospitality of the people of Jammu and Kashmir.”

“Tomorrow, 25th March is special for Jammu and Kashmir. A majestic tulip garden on the foothills of Zabarwan Mountains will open for visitors. The garden will see over 15 lakh flowers of more than 64 varieties in bloom.”

Similarly, mayor of Srinagar Junaid Azim Mattu had also encouraged tourists and locals to visit the tulip garden in a tweet on March 24. “As our Tulip Garden in Srinagar opens for visitors tomorrow (March 25), as the Mayor of Srinagar I welcome you, your friends and your families to Srinagar! We are a city with a heart and a warmth that beckons! Srinagar awaits your arrival! Yours truly, Junaid_Mattu Mayor of Srinagar.”

Political analyst Riyaz Ahmad pointed out that it was “due to complacency and uncontrollable urge of the authorities to encourage gatherings to paint normalcy in Kashmir” that led to the current situation. “There was a brazen attempt on part of the administration here to showcase normalcy with tourism-related activities, visits of the Bollywood producers and directors, and other highly publicised events. The administration wanted to manufacture consent for the August 5 decision and portray that it has been normalised. Now we are paying an unimaginable cost,” Ahmad told The Federal.

Civil society voices are also angry, arguing that while the authorities have imposed Section 144 in Srinagar, clamped night curfews and imposed lockdown in Kashmir for the locals, they have not cancelled the Amarnath pilgrimage.

Aarif Hussain Wani, a local resident, wondered: “How can they [J&K administration] impose restrictions on the local people when the tourists are free to move anywhere.”