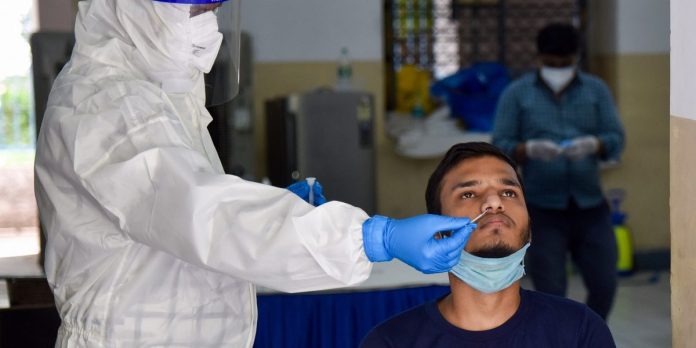 India now accounts for one in every six daily infections worldwide. Photo: PTI

India on Wednesday (April 21) inched closer to reporting a record high of 3 lakh COVID cases per day. The figure for the last 24 hours stood at 2,95,041, while the death toll mounted to 2,023, an unprecedented count, according to the Union Health Ministry data.

Worst-hit Maharashtra reported 62,097 fresh coronavirus cases, taking the tally to over 39.6 lakh. As many as 519 more people succumbed to the virus. The state is headed for more restrictions as ministers have recommended a full lockdown. Chief Minister Uddhav Thackeray will take the final call.

Maharashtra was followed by Kerala, Karnataka, Tamil Nadu and Andhra Pradesh. Kerala on April 20 recorded its highest single-day spike in infections with 19,577 cases, taking the state’s tally to over 12.72 lakh. As many as 28 fatalities were reported the same day.

Also read: In Mumbai, 90 per cent COVID cases from high-rises, not slums

The Yediyurappa government in Karnataka has rolled out a stricter set of measures to check the virus spread. The measures include a statewide night and weekend curfew and closure of educational and many commercial establishments. Bengaluru reported single-day high of 13,782 cases, whereas the state saw 21,794 cases.

The new case count in Delhi on April 20 stood at 28,395, the biggest single-day spike. Major hospitals in the national capital heaved a sigh of relief after they received the much-needed oxygen supplies.

Delhi’s neighbor Uttar Pradesh reported nearly 30,000 new cases. The state has said it will offer free-of-cost vaccine from May 1, when the country’s inoculation will cover all people aged 18 years and above.

In the north-east, Mizoram has become the first state to declare a week-long lockdown from April 20 to 26. The state also has the second least numbers of COVID-19 cases in the nation after Lakshadweep, with 5,085 total cases and 12 deaths.

Prime Minister Modi in his address to the nation on April 20 underscored the need to to save the country from a lockdown, asking states to take lockdown as the last resort and focus on micro-containment zones.

On the vaccination front, more than 29.9 lakh doses were administered on April 20. Over 13.01 crore vaccine doses have been administered since the drive began in January.