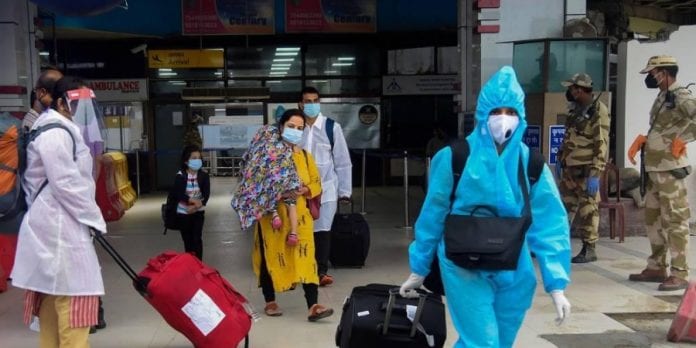 There are 4,24,126 active cases of coronavirus infection presently in the country, while 7,82,275 people having recovered so far. The total number of confirmed cases includes foreigners.

Of the 1,120 deaths reported in the last 24 hours, 280 are from Maharashtra, 518 from Tamil Nadu, 65 from Andhra Pradesh, 55 from Karnataka, 34 from Uttar Pradesh, 39 from West Bengal, 29 from Delhi, 28 from Gujarat, 14 from Madhya Pradesh, 10 from Jammu and Kashmir, eight from Haryana, and Telangana has reported nine fatalities.

Odisha and Punjab have recorded six deaths, followed by Rajasthan and Chhattisgarh with four, Goa and Jharkhand two, while Kerala, Puducherry and Tripura have registered a fatality each.

The Health Ministry stressed that more than 70 per cent of the deaths occurred due to comorbidities.

Nagaland has recorded 1,087 COVID-19 cases, Arunachal Pradesh 858, Chandigarh 780, and Dadra and Nagar Haveli and Daman and Diu together have reported 775 cases.

Meghalaya has reported 514 cases, Sikkim 451, Mizoram has registered 317 infections so far, while Andaman and Nicobar Islands has recorded 221 cases.

“Our figures are being reconciled with the ICMR,” the ministry said, adding that state-wise distribution is subject to further verification and reconciliation.

The Jammu and Kashmir administration has imposed a six-day complete lockdown across Kashmir Valley, except for Bandipora district, following a spike in the number of COVID-19 cases in the last three weeks, officials said on Wednesday.

The decision comes into effect on Wednesday evening and will be reviewed after six days, they said.

Agriculture, horticulture and construction activities will continue in accordance with disaster management guidelines. The movement of goods carriers, LPG and oil tankers will also continue unhindered.

“Complete lockdown in all Red districts (excluding Bandipora) of Kmr (Kashmir) Div (Division) from today evening till 6 am on 27-7-2020,” the Jammu and Kashmir administrations Department of Information and Public Relations said on Twitter.

Delhi govt plans more monthly sero-surveys, next to be done in August

Meanwhile, a fresh sero-survey will be conducted in the national capital from August 1-5 and such exercises will be conducted every month to formulate better policies to tackle COVID-19, Health Minister Satyendar Jain said Wednesday.

The decision comes after the city government analysed the results of the latest sero-survey which showed nearly 23 per cent of the people here had exposure to the novel coronavirus.

On the sero-survey, the minister said a strategy is being made for the next survey, and more samples will be taken than in the previous exercise. “The results of the sero-survey conducted from June 27-July 10 came out yesterday, and it shows that nearly one-fourth of people had developed antibodies, meaning they had got infected and recovered. Most of these people who were sampled did not know that they were infected earlier,” Jain told reporters.

The Delhi government has now decided to conduct more monthly sero-surveys to find a greater percentage of such people who had got infected and recovered, so as to formulate better policies for tackling COVID-19, he said.

On reports of some people trying to indulge in monetary transactions for convalescent plasma, Jain warned that “strict action” will be taken if anyone tries to buy or sell plasma.

The sero-prevalence study was done by the Delhi government in association with the National Centre for Disease Control (NCDC).

The study has found that around 23 per cent of the people surveyed in Delhi had an exposure to the novel coronavirus, the central government said on Tuesday.

According to NCDC Director Sujeet Kumar Singh, the remaining 77 per cent are still vulnerable to the disease and containment measures need to continue with the same rigour.

The study, conducted from June 27 to July 10 by the NCDC in collaboration with the Delhi government which involved testing 21,387 samples, also indicated that a large number of infected persons remain asymptomatic, according to the Union Health Ministry.