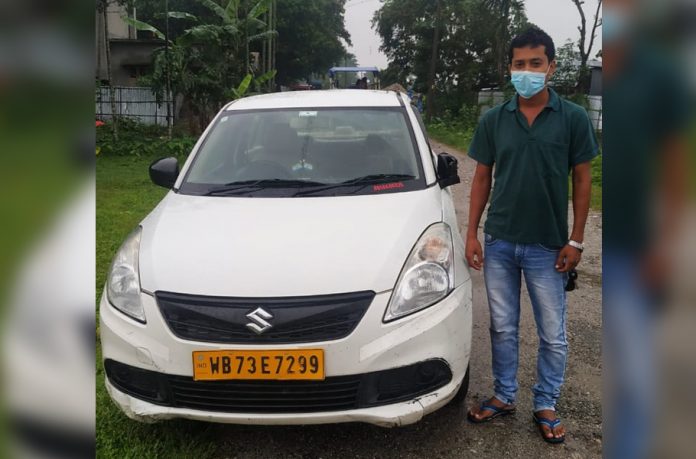 Anup Roy poses with his one remaining car in Siliguri. His other car was repossessed by the bank

COVID-19 has taken a massive toll across India, with the country crossing 400,000 deaths on Friday (July 2) – a vast undercount, according to almost all experts. Millions more have seen their livelihoods destroyed – and with it any hopes of a better future.

A March 2021 study from the Pew Research Center, a global think tank, found that the number of people who are poor in India (with incomes of $2 or less a day) has increased by 75 million because of the COVID-19 recession – accounting for nearly 60 per cent of the global increase in poverty. The earnings of 230 million slid below the national daily minimum wage of ₹375 during the pandemic, according to a study from the Azim Premji University. A Centre for Monitoring Indian Economy report said more than 10 million Indians have lost their jobs because of the second wave, and around 97 per cent of households’ incomes have declined since the beginning of the pandemic last year.

The unprecedented crisis has pushed millions of people into debt and penury. The Federal spoke to families from four states about their financial distress and the cycle of debt that had entrapped them.

Months after the government relaxed the lockdown after the first phase, Renuka, a migrant from Hubli working as a domestic help in Bengaluru, was still trying to get back on her feet. Then the second wave hit.

Some of her employers left the city. Some told her not to come, fearing she might be a potential carrier of the coronavirus.

Until March 2020 Renuka was earning about ₹20,000 per month by working in six-seven households. Today her income has dropped about 60 per cent.

Renuka did not have any income during the lockdown period, but she managed to get some work recently. But after paying rent and managing her household expenses, she is barely able to save anything. Post lockdown, she depended on the food she got from her employers.

With the pandemic increasing the financial burden at home, Renuka says she has to endure domestic violence, as lack of money triggers extreme reactions from family members.

“To survive the lockdown, I initially took a loan of ₹50,000. Then for my daughter’s wedding, I had to borrow another one lakh. I worry about how to repay the loan as I am unable to save any money,” Renuka said.

Life looked promising for Anup Roy until COVID-19 struck early last year. Only about a year ago the 32-year-old had a decent job at a transport company in Siliguri, in Darjeeling district of West Bengal. He was earning enough to own two cars, which he had rented out to a private taxi service to supplement his income.

All that seems a distant dream now.

As a supervisor in Shyamoli Paribahan Limited’s Siliguri office, Anup was getting a salary of ₹20,000 per month.

“For our two-member family comprising my wife and myself, the salary was enough. We could even save some money after meeting regular household expenses,” Anup said.

To augment his income, Anup bought a Maruti Celerio three years ago. He took a loan from Magma Fincorp and his monthly instalment was ₹8,400.

Siliguri being the gateway to tourist destinations in Sikkim and Darjeeling Hills, Anup decided to rent out the car to a taxi company. “After incurring all the expenses such as driver’s salary, EMI, maintenance costs etc, I earned between ₹5,000 and ₹7,000 a month,” he said.

Within a year, Anup bought another car, a Maruti Dzire. This time he got the car financed from Mahindra Finance. The monthly EMI was ₹12,400.

Until that point Anup’s was a perfect middle-class growth story.

Then COVID struck. To prevent the spread of the virus, Prime Minister Narendra Modi announced a nationwide lockdown from midnight of March 24.

Hearing the prime minister making the announcement that evening, Anup had no inkling what was going to befall him.

“The lockdown hit the transport and tourism sector badly. My cars were garaged, so were the buses of the transport company where I was working,” Anup said.

A couple of months into the lockdown, the transport company laid off several employees to curtail loss. Anup was among those.

That was just the beginning.

With no income, Anup naturally defaulted on his loans.

Although the central government had announced a moratorium on loans, private finance companies were not so accommodating.

“Magma Fincorp in particular was relentlessly pressuring me to clear the outstanding instalment payments. Finally, I was forced to surrender my Celerio last year. My outstanding loan was ₹2 lakh,” Anup said.

After the lockdown was relaxed at the end of last year, things started getting better. Anup hit the streets with his Dzire car and was somehow making ends meet after paying the monthly instalment of ₹12,400.

The turnaround was short-lived as amidst the second wave, the West Bengal government announced another lockdown from mid-May.

“After the lockdown was lifted, I somehow managed to clear the pending instalments of my second car loan. But now I have two months of arrears again. The company is constantly asking me to clear the loan or else they will take away the car. I have appealed to the company to consider my case sympathetically. Thankfully, the manager has agreed to give me some more time,” Anup said.

In the meantime, to run his household, which has been sustaining on free rations provided by the state government, Anup has accumulated credits with local grocery shops and other vendors.

“I am totally at a loss as to how to recover from this situation. Maybe I have to sell my house built on four kathas of land on the outskirts of Siliguri,” he said.

Shopping malls are the last to open after a lockdown in Kerala. Asif Ismail, who has been working as a purchase manager at a Kochi mall, has not received his salary since June 2020.

“Not only me, but hundreds of people working in malls are also going through a similar situation. I have no hope of getting the job back,” Ismail said.

Most of the shops are closed anyway as they are unable to pay the heavy rent, Ismail said. “I don’t know how many shops will reopen after the lockdown.”

Asif’s two children study in private schools and he hasn’t paid their fees despite repeated reminders.

“I hope they will not insist that the children cannot attend online classes unless their dues are cleared,” Ismail said.

Ismail and his family were staying in a rented apartment in Vyttila in Kochi. They moved back to their hometown in Thrissur in October 2020. “We were not able to manage our living expenses in Kochi. At least I don’t have to pay the rent here [in Thrissur] as I have a home of my own,” he said.

Like millions of people in India, Siva Siddhu depends on livestock to supplement his income, and the pandemic has had a huge impact on activities allied to agriculture, such as breeding and buying and selling of cattle.

Siddhu, a resident of Tenkasi District in Tamil Nadu, owns a goat farm. This year he couldn’t travel to the market to buy goats because of the lockdown. “There are six goat markets operating twice a week in the district. If there wasn’t a lockdown, I could have bought some 20 goats from the markets,” he said.

Siddhu said although agricultural activities were permitted during the lockdown, allied services such as goat breeding and cattle markets were restricted.

Siddhu also derives a small income from breeding native dogs. “I could have sold puppies in the market. But now I can’t travel and will have to wait another year,” he added.