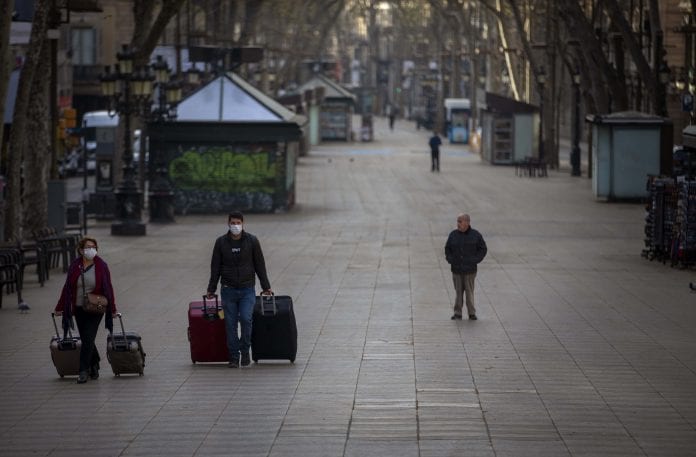 People wearing masks drag their suitcases along La Ramblas in Barcelona, Spain. On Monday the country started welcoming vaccinated visitors from the US and most countries, as well as European visitors who can prove they are not infected. (AP/PTI Photo)

Food, art, culture, stunning vistas – after more than a year of Covid-induced restrictions, Europe is once again opening up to visitors as it rebuilds its tourism industry. Under an agreement reached by European Union leaders last month, each member state will decide when to reopen its borders and to whom.

With India still recovering from the second wave of the pandemic and travel restrictions to and from the country still in place, it could be a while before Indians are once again welcomed back to Europe. Having said that, here’s a look at current entry rules in some popular destinations.

Only those who have got one of the four EU-approved vaccines – Pfizer, AstraZeneca, Moderna or Johnson & Johnson – are allowed to enter France, which officially reopened its borders on Wednesday. Vaccinated visitors from outside Europe and a few “green” countries will still be asked for a negative PCR or a negative antigen test. Tourists from 16 countries, including India, Brazil and South Africa, are still banned. Non-vaccinated visitors from “orange list” countries – including the US and Britain – can come only for specific, imperative reasons.

Americans need to self-isolate upon arrival for 10 days unless they arrive on so-called “COVID-tested flights”. That means passengers are tested before and after the flight and must fill out documents about their whereabouts to facilitate contact tracing, if required.

“COVID-tested” flights from the US started in December and have also been operating since May from Canada, Japan and the United Arab Emirates.

British and Israeli travellers are also welcome. They no longer need an “essential” reason to visit the country and don’t have to self-isolate, providing they present proof of a negative COVID test.

Greece, which his heavily reliant on tourism dollars, started opening to American travellers back in April. Now visitors from China, Britain and 20 other countries are also allowed to visit for nonessential travel.

On June 1, Greece, Germany and five other EU members introduced a COVID certificate system for travellers, a month ahead of the rollout of the programme across the bloc.

Spain started welcoming vaccinated visitors from the US and most countries on Monday, as well as European visitors who can prove they are not infected.

Americans and most other non-Europeans need an official vaccine certificate by a US health authority, in English. Spain accepts those who were inoculated with the four EU-approved vaccines as well two Chinese vaccines authorised by the World Health Organization.

Arrivals from Brazil, South Africa and India are banned at the moment, and non-vaccinated Americans and many other non-EU nationalities cannot come to Spain for tourism for now. But there are exemptions for countries considered at low risk, such as citizens from Britain, who can arrive without any health documents at all. EU citizens need to provide proof of vaccination, a certificate showing they recently recovered from COVID, or a negative antigen or PCR test taken within 48 hours of arrival.

Brexit Britain has put the US along with most European nations on an “amber” list, meaning everyone arriving has to self-isolate at home or in the place they are staying for 10 days. UK and US airlines and airport operators are pushing for a travel corridor to allow tourism to resume.