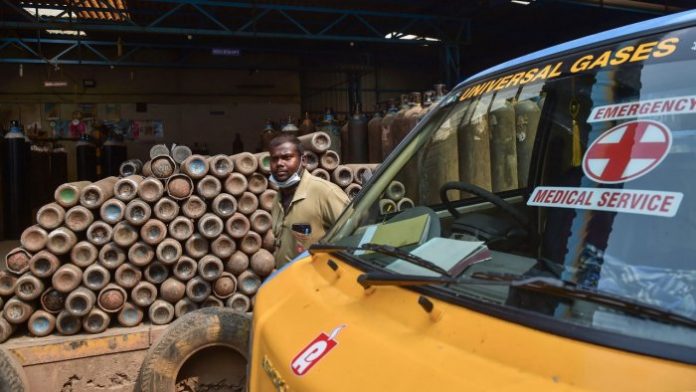 Many small hospitals in Bengaluru say due to shortages and delays, they depend on suppliers in the open market. PTI Photo

Smaller hospitals and nursing homes in Bengaluru are bearing the brunt of shortage of medical oxygen, with prices shooting up 200-300 per cent for a refill.

Several hospitals and nursing homes with less than 30 beds say suppliers are overcharging them at a time of crisis. The state has set up a war room to address concerns, but phone lines are constantly busy and there’s no other complaint mechanism, they say.

“In normal course the price of liquid oxygen refilling, including logistical charges, is ₹22-23 per cubic meter. This has gone up to ₹90-100 per cubic meter in the unorganised market,” says HM Prasanna of Karnataka’s Private Hospitals and Nursing Homes Association (PHANA).

While hospitals usually have contracts with oxygen suppliers for a fixed price, many say due to a shortage and delay, they depend on suppliers in the open market who charge higher.

The National Pharmaceutical Pricing Authority has fixed the factory prices of liquid medical oxygen. So, the price of oxygen gas cylinders have been capped at ₹15.22/CUM and ₹25.71/CUM, respectively

Dr Shobha Prakash, medical director of Neha Prakash Hospital in Bangalore with 26 hospital beds, says every 45 minutes or so, the hospital needs a Type D cylinder, which today costs ₹ 2,000 in the open market against ₹ 1,200 three months ago. They have invested in about 40 cylinders and need refilling on a daily basis.

“If we reduce a bit of oxygen supply considering a patient’s health, his/her family members panic and scream. So we cannot afford to risk and we cannot negotiate with vendors in desperate times,” says Dr Shobha.

With the current crisis, she says her workers have to stand in a long queue for about six hours and get the cylinders refilled. Industry experts believe the crisis will end by June once the production starts to increase with plants being approved by the state and the Centre.

In Bangalore Rural, the price rise is somewhat controlled with vendors not charging more than 15-20% says doctor Nagaraj of Srinivasa Hospital in Hosakote.

Bhuruka Gases, a city-based company that supplies combined liquid oxygen with a capacity to produce 65 tonnes of oxygen a day, says earlier only 10% of it was used for medical purposes. “It is now nearly 80% for medical use”.

The state government and the Bengaluru civic body (Bruhat Bengaluru Mahanagara Palike) officials say the oxygen supply was enough. “When COVID cases peaked last year, we had used around 300 to 350 tonnes of oxygen. In the second wave, we have already used up to 500 tonnes. We estimate a requirement of 1,414 tonnes from May 1, which the Chief Minister conveyed to the Prime Minister,” Health Minister Dr K Sudhakar said.

Several hospitals complain that when they try to reach the government helpline number, they barely get any response. When the crisis deepened last week, the state government set up a war room and said people can contact +918951755722 -Drug control officers for oxygen supply and Remdesivir vials. But when The Federal tried to reach the number on April 27 around 10.30 am, after 13 unsuccessful attempts, a customer care agent picked up and when asked if a complaint could be registered about a vendor fleecing hospitals, the person said “no”.

The war room attendant said they take requests for only oxygen supply and will call back people, without giving definite time as to how long it would take to meet the oxygen demand.

Some private hospitals have cut down on admissions, including patients who need critical oxygen support, and are trying to save as much as possible.

“It’s a war-like situation. We are trying to reduce the intake of critical patients who may need full oxygen support and directing them to go to other hospitals,” says Dr M L Giridhar of Sri Lakshmi Multi Specialty Hospital in Sunkadakatte, Bengaluru. “The resource is scarce and needs to be better managed. The doctors have to monitor patients regularly and. control the supply,” he said.