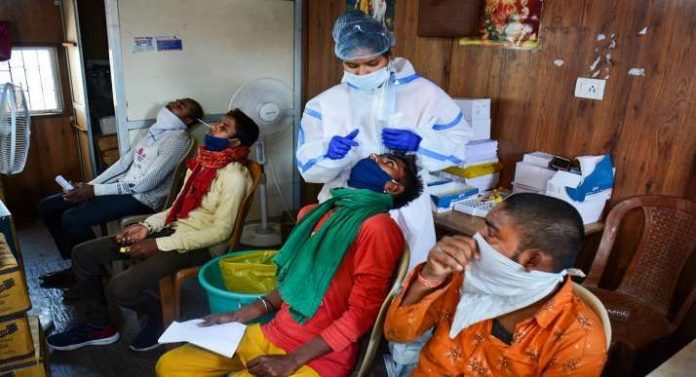 COVID cases may peak between May 3 and 5, according to a mathematical model of a team of scientists advising the government. File Photo

The COVID case count in India has crossed the 4 lakh mark with over 3,500 fatalities in the last 24 hours. The number of cases on Saturday (May 1) stood at 4,01,993 and deaths at 3,523 as per health Ministry data. The surge comes on day when the country launched the third vaccination drive – said to be the world’s largest – amid reports of vaccine shortage.

Delhi, Maharashtra, Tamil Nadu, West Bengal, Kerala, Rajasthan and Madhya Pradesh have said their vaccine stocks are low. The Centre maintains that 1 crore doses are still available with the states.

The Health Ministry said that more than 70 per cent of the deaths occurred due to comorbidities. “Our figures are being reconciled with the Indian Council of Medical Research,” the ministry said on its website, adding that state-wise distribution of figures is subject to further verification and reconciliation.

COVID cases in the country may peak next week between May 3 and 5, according to a mathematical model of a team of scientists advising the government, Reuters reported. “Our belief is that by next week, the daily new cases nationwide would have peaked,” M Vidyasagar, head of a government-appointed group of scientists modelling the trajectory of infections, told the news agency.

The Supreme Court on April 30 warned action against states if they tried to clamp down on information or citizens sharing grievances on social media. “If citizens communicate their grievances on social media, we do not want a clampdown on information. We will treat this as contempt if any citizen is harassed if they want bed or oxygen,” Justice DY Chandrachud said during a hearing.

Prime Minister Modi held a meeting with his council of ministers on April 30 and “discussed the various steps being undertaken including coordination with the states, augmenting medical capacities and boosting oxygen availability.”