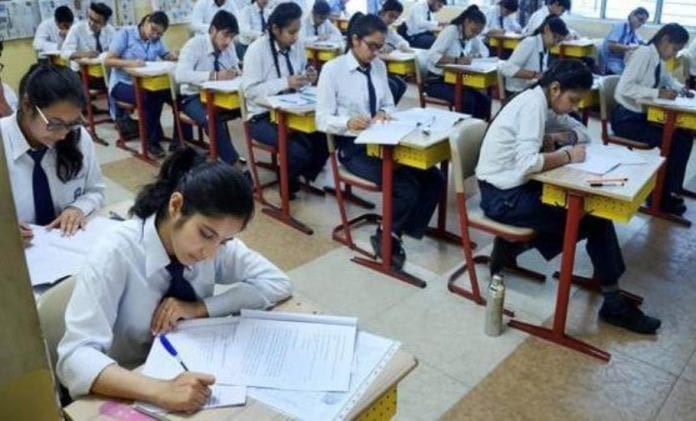 The outcome of the high-profile meeting on May 23 appeared to rule out scrapping this year’s CBSE Class 12 exam. File Photo

In the face of unrelenting COVID onslaught in many states and UTs, The CBSE has come out with two options for conducting Class 12 board exams. The Centre called a meeting of states on Sunday (May 23) to gauge their opinion. Most states, it is reported, support CBSE’s proposal to conduct exams for only 19 major subjects in a shortened format in July-August. All states have been asked to submit their feedback in writing by May 25.

The outcome of the high-profile meeting appeared to rule out scrapping this year’s CBSE Class 12 exam. The Class 10 Board exam has already been cancelled.

As the meeting chaired by Defence Minister Rajnath Singh and including several senior ministers, such as Smriti Irani, Prakash Javadekar and Education Minister Ramesh Pokhriyal, got under way, hashtags #cancelboardexams and #CBSE trended on Twitter.

“The priority of the government is to conduct all exams in a safe and secure environment,” Rajnath said after the meeting.

First, what the CBSE has proposed:

Option A: Regular exams for major subjects at notified centres. For minor subjects, assessment should be made on the basis of performance in major subjects. It stipulates one month of pre-exam activities and two months for conducting exams and declaration of results and another 30 days for compartment exams. This means a three-month period has to be available; August could be the likely month for holding exams. It proposes A ugust 1 to August 20 as likely exam dates, and result on September 20.

Option B: Shorter duration exams at school itself. The exams would be of shorter 90 minutes instead of 180 minutes for 19 major subjects in multiple-choice format. Students have to appear one language and three elective subjects only; Based on their performance in these, the results of 5th and 6th subjects will be assessed. Exams should be conducted twice – July 15 to August 1 and August 5 to August 26; wherever conditions are conducive, exams could commence from a suitable date. In the remaining locations, exams will start after a fortnight of the first phase; if a student fails to appear in exams due to COVID, he/she would get another chance.

Delhi, Kerala, Assam, Maharashtra, Madhya Pradesh, Haryana and Meghalaya  suggested vaccinating all Class 12 students before the exams. Delhi says it can do it in two months, given the availability of vaccines.

Goa and West Bengal said a decision would be taken later. West Bengal has not cancelled any of its board exams.

Tamil Nadu suggested conducting the exams after the COVID situation improves, but Karnataka said it was important to conduct these exams.

Odisha and Rajasthan say the state would consider these exams after the pandemic situation improves or cut short the exams. It also says that since the state was busy preparing for cyclone Yaas, it would decide later.