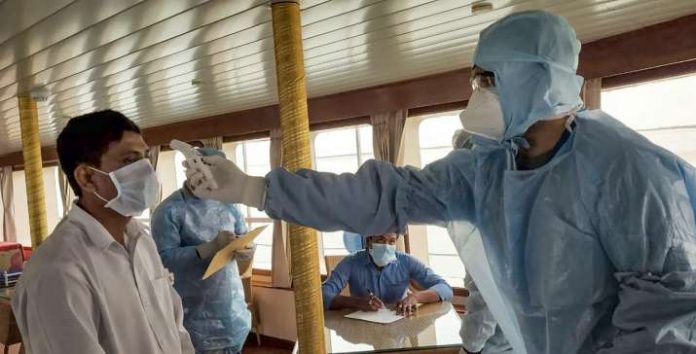 Modi exuded confidence that the last year's success can be replicated as local leadership now have experience. PTI Photo

Four cryogenic tanks, to be used for the transportation of oxygen, are being airlifted from Singapore on Saturday (April 24). A Home Ministry official said the four empty tanks are being brought to India by a heavy-lift transport aircraft of the Indian Air Force.

A C-17 aircraft of the IAF took off from the Hindon airbase in the outskirts of Delhi for Singapores Changi airport early Saturday. After loading the tanks, the aircraft is expected to land at Panagarh air base in West Bengal the same day, another official said.

On Friday, the Union Home Ministry said it was in talks for the import of high-capacity oxygen-carrying tankers from Singapore and the UAE. The move came after Union Home Minister Amit Shah reviewed the coronavirus situation in the country.

The country’s major cities are facing an acute shortage of hospital beds and medical oxygen, resulting in the deaths of critically ill patients, most of them affected by COVID.

The Centre has decided to remove customs duty and health cess for import of COVID vaccines, oxygen and equipment needed for its supply with immediate effect to augment the supply and remove shortage of these items and to “make them cheaper”, amid a severe second wave of the pandemic that is resulting in record high number of daily cases in India.

The waiver will be come into effect immediately and will be in place for three months, the government said on Saturday following a high-level meeting that was chaired by Prime Minister Narendra Modi. It will be applicable on import of equipment used for giving oxygen to patients in hospitals, including generators and storage tanks.

The centre has also appointed a nodal officer to deal with the customs clearance issues.

Prime Minister Narendra Modi said the COVID-19 challenge before the country now is bigger than the last year and called for making efforts to ensure that the infectious disease is stopped from hitting villages “by all means,” PTI reported.

At a ceremony on Panchayati Raj Diwas where Modi launched the distribution of e-property cards under the Swamitva scheme, he said the pandemic was prevented from affecting rural areas last year and exuded confidence that the success can be replicated as local leadership now have experience as well as knowledge.

“I have this confidence that if someone is going to emerge victorious first in this fight against the coronavirus, then it is going to be India’s villages, the leadership of these villages… The people of the villages will show the way to the country and the world,” said the PM.

Right now, the mantra of the panchayats should be ‘dawai bhi, kadai bhi’ (medicine as well as caution), he stressed.