A study projecting a gloomy scenario for India on coronavirus spread has triggered a controversy and a flood of angry reactions on social media, prompting the US-based Johns Hopkins University to distance itself from the report co-authored by its faculty.

The university has said that it had not authorised the Washington-based Centre for Diseases Dynamics, Economic and Policy (CDDEP) to use its logo on a Covid-19 research report predicting that India may see as many as 100 million people contract the coronavirus infection even in the most optimistic scenario. 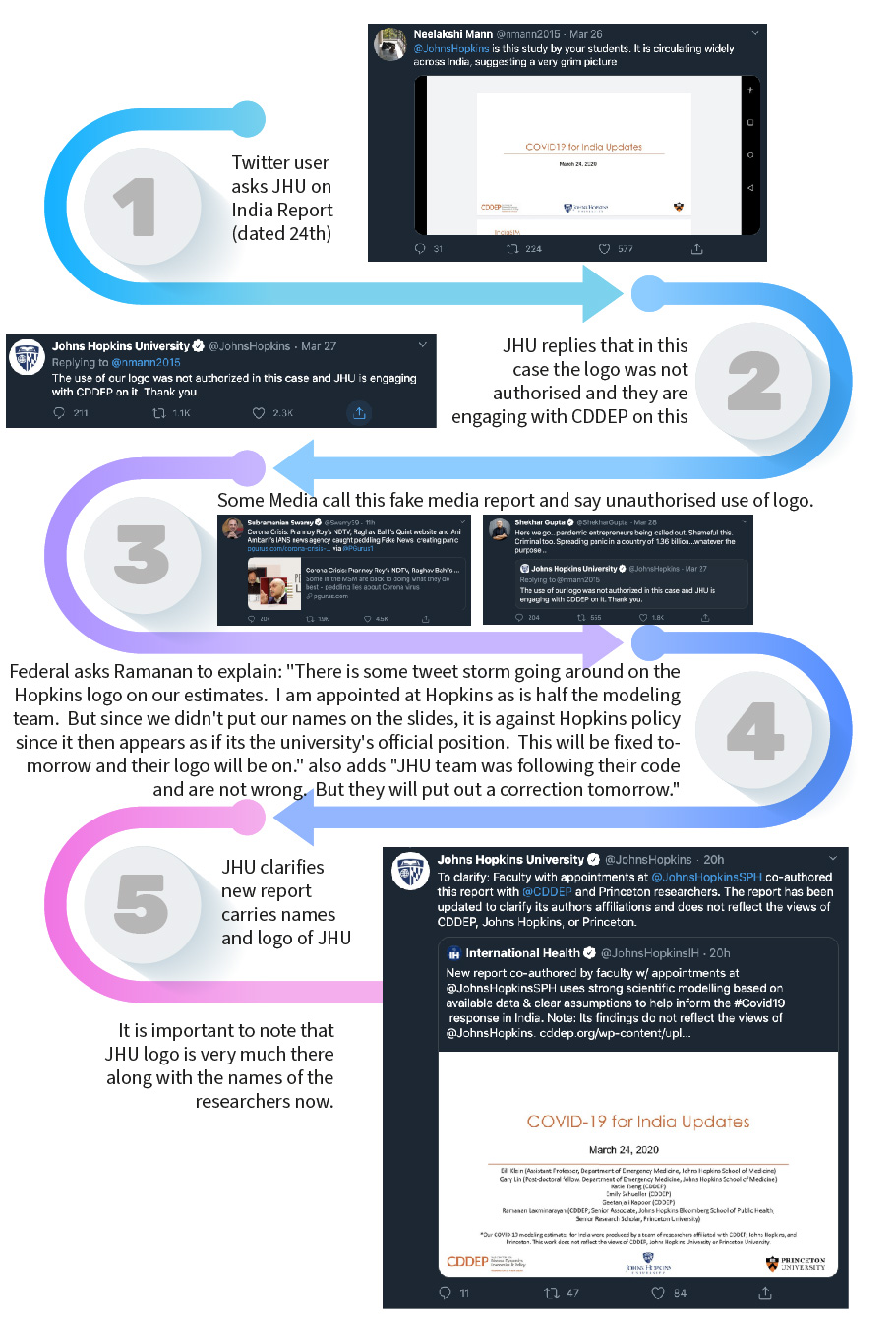 “New report co-authored by faculty, with appointments at the public health university, uses strong scientific modelling based on available data and clear assumptions to help inform the COVID-19 response in India. Its findings do not reflect the view of JHU,” the University tweeted.

Related news: The bad, the worse and the worst: Where India is headed on the COVID graph

The clarification came after the contents of the 33-page report, titled ‘Covid19 for India Updates’, set off panic in the country because of the alarming nature of its projections.

BJP leader Subramanian Swamy and his followers on Twitter condemned the report, saying it was peddling lies about India. The website, Pgurus, dubbed the study as fake news designed to create panic across the country.

The report carried the logos of the CDDEP and Johns Hopkins University and has been published on the CDDEP website.

“The use of our logo was not authorised in this case and JHU is engaging with CDDEP on it,” Johns Hopkins said in a tweet, seeking to disassociate itself from the report.

The CDDEP was founded by Ramanan Lakshminarayan who had earlier this month, in a series of media interviews, criticised the Indian government’s initial testing approach and called for more rigorous testing.

Claiming that the number of Covid-19 cases in India are expected to soar to around 300 million to 400 million by July without interventions, the report said that the community transmission of the virus may have started early this month.

This is in contrast to the repeated assertions being made by the Indian Council of Medical Research (ICMR) that there were no indications as yet of the stage 3 transmission happening in the country.

The Joint Secretary of Health Lav Agarwal also said that there was no proof of community transmission of coronavirus as yet.

The report uses the IndiaSIM Model to arrive at the key conclusions pertaining to the spread of coronavirus in India. The key parameters used include the force of infection, age- and gender-specific infection rates, severe infection, and case-fatality rates.

Despite the present lockdown, the best-case scenario for India is that at least 15 crore people may be infected with coronavirus by the end of May, the report claimed. In the worst case, the figure could cross a staggering 24-crore mark with Maharashtra, Kerala, and Delhi being the worst-affected of the lot.

Increased testing and strict implementation of social distancing, rather than lockdown, will hold the key in flattening the virus curve in the coming months, it said.

“A national lockdown is not productive and could cause serious economic damage, increase hunger, and reduce the population resilience for handling the resilience peak,” the report warned.

Instead, the researchers emphasised the need for implementing social distancing strictly.

Some states may see transmission increase only after another two weeks and lockdowns should be “optimised for when they could maximise the effect on the epidemic but minimise economic damage,” it suggested.

“Border closures at this stage have little to no impact and add further economic disruption and panic. While international transmission was important in the first stage, domestic transmission is now far more relevant,” the report pointed out.

The range of COVID-19 cases could be between 12.5 crore and 24 crore in the best and worst-case scenarios respectively.

According to the study, the most optimistic scenario is that the spread will be limited to 150 million, if the virus weakens on its own and social distancing is followed strictly till at least June.

The report pointed out that unlike other countries, a major chunk of India’s population comprises young people and this can play out in its favour. The kicking in of summer could also be a boost. “Temperature and humidity increase should help us in reducing the case load,” it said.

The study has projected the numbers in three possible scenarios depending on the risk factor: high, medium and low.

The most likely scenario is that there will be medium spread of the virus if everyone complies with the lockdown, provided the virus doesn’t become more deadly. This will limit the spread of the infection to just under 20 crore in May before starting to die down.

However, the infection could be high, even with the implementation of the lockdown, if social distancing is not followed strictly. This means that the total number of infections can skyrocket to 25 crore by April before starting to come down.