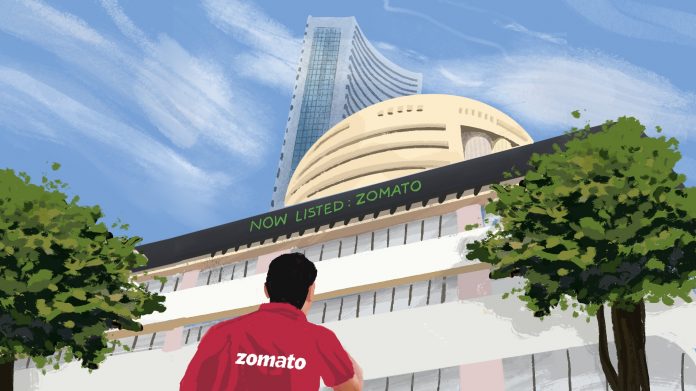 Zomato’s adjusted Q2 FY22 revenue stood at $189 million, marking a 22.6% increase from the previous However, its loss widened drastically to $41 million, almost twice the $22 million posted in Q1.

Food delivery unicorn Zomato, among the trailblazers in 2021’s line-up of star-studded IPOs, has made a bunch of headlines while announcing its second-quarter results. For, with the July-September numbers come the New Delhi-based company’s ambitious plans to invest around $1 billion in start-ups as it scouts for inorganic growth in a booming e-commerce market.

In its quarterly report, titled Inflection Point, Zomato’s founder and CEO Deepinder Goyal and CFO Akshant Goyal said: “India is at an inflection point for internet businesses. This calendar year so far, we have seen 35 new unicorns in India. While there is a lot of chatter about this being a ‘bubble’, a closer look at most of these companies will tell you that real revenue, real growth and a real revolution in India is underway.

“We believe the next 10 years in the Indian internet ecosystem will be unprecedented…This has fuelled our ambitions further and we are now thinking about how we can create a $10 billion business by revenue in a few years’ time.” It is to tap this potential that Zomato is rolling out a mega investment plan.

Here it is. In addition to our quarterly performance, this update includes the rationale behind our investments in Shiprocket, Magicpin, and Curefit. And, of course, how our long term view of our business is developing. Happy reading!https://t.co/cse7n0uWnV https://t.co/TegqYzvJSI

The quarterly results were nothing to write home about. Zomato’s adjusted Q2 FY22 revenue stood at $189 million, marking a 22.6% increase from the previous quarter (Q1 FY22). However, its loss widened drastically to $41 million, almost twice the $22 million posted in Q1. For the first half of this fiscal, its adjusted revenue was $344 million. Since the company got listed this year only, there is no comparable period from the previous one.

In a highly competitive market, where the struggle to survive is only escalating by the day, there were investor concerns on how Zomato would sustain its highly ambitious investment agenda. But the company’s top leadership sounded an upbeat note on this, saying the IPO had changed nothing — the company would look at long-term success, rather than short-term, or QSQT (‘quarter-se-quarter-tak’, a play on the Hindi blockbuster Qayamat se Qayamat tak).

“We have heard that a public listing changes a number of things for companies. We are adamant that we will not let our IPO change anything, and we aren’t going to morph into a QSQT business. We will continue to focus relentlessly on the long term,” they said.

What came as a bolt from the blue for investors was Zomato’s $1 billion investment plan for the next few years, under which some deals are being made immediately. “Including our $100 million investment in (hyperlocal delivery start-up) Grofers earlier in August 2021, we have now committed $275 million across 4 companies over the past six months,” said the executives. “We plan to deploy another $1 billion over the next 1-2 years, with a large chunk of it likely to go into the quick-commerce space.”

In Bengaluru-based healthtech start-up CureFit, Zomato is investing $100 million for a 6.6% stake under a cash-cum-equity deal. As part of the agreement, it will infuse $50 million in cash in Curefit. Also, it will sell its entire stake, worth another $50 million, in Gurugram-based sporting venues aggregating start-up Fitso to Curefit.

Zomato, which had acquired Fitso in January 2021, said it expects to gain from synergies with the Curefit deal. “This will help us potentially explore cross-selling benefits between Zomato and Curefit, as we see food and health becoming the same side of the coin in the long term,” said the results report.

Under another deal, Zomato will invest $75 million for an 8% stake in New Delhi-based Shiprocket, an e-commerce start-up that offers logistics services.   In a third deal, it is investing $50 million in Gurugram-based Magicpin, the operator of an offline discovery and reward platform.

The Zomato CEO and CFO emphasised that theirs is a well-thought-out strategy, rather than a rash of standalone decisions. This period is not just of investments, but of consolidation, too, they added. Zomato has closed its direct-to-consumer (D2C) nutraceuticals business. “We are also shutting down our operations in Lebanon, which is the only international business we were left with (other than dining-out business in the UAE) after shutting down the rest of our international operations last year,” they said in the report.

The executives expressed high optimism on the hyperlocal delivery business, among e-commerce segments. “As these businesses scale, we would want to be the provider of additional capital to these businesses and consolidate our stake leading to a potential merger at some point… In the worst case, we would want these investments to generate huge learnings and great financial returns for Zomato,” said their note.

Pointing out that they were emulating the strategy of Chinese e-commerce giants Alibaba and Tencent, they said: “We want to take an investment route to building these businesses instead of building them in-house.”

A bite too big?

However, there was some concern among investors. For one thing, there were worries that the company was taking too many big steps in too short a time.

Zomato wants to use their IPO funds to invest in other start ups so that when their valuation goes up Zomato’s valuation will go up automatically instead of investing the money in their own business.
There seems to be no clarity on profitability.

For another, analysts pointed out, several retail investors had put in their money in Zomato for its food delivery model, and the wide-ranging inorganic expansion may be something they’d not signed up for.