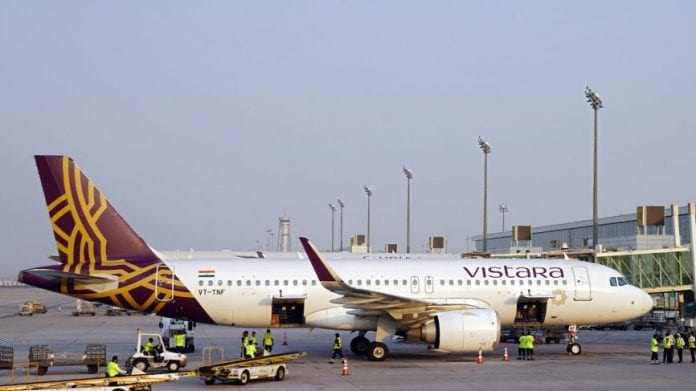 A joint venture between Tatas and Singapore Airlines, Vistara has tied up with Tata group firm Nelco to offer in-flight connectivity service.

Vistara would also be the first domestic carrier to provide in-flight broadband for fliers.

Boeing 787 aircraft are known as Dreamliners.

The service would also be available for domestic customers when these planes are operated in the Indian airspace.

Nelco has partnered with Panasonic Avionics Corporation to start the service.

“We have ordered Dreamliners and A321 which will be delivered by February-end or March. We will start their commercial operations on international routes by March-end or April with in-flight service on board.

“In the next two weeks, we will sit with Nelco and Panasonic to decide on the price,” Kannan said.

Vistara has ordered six Dreamliners and ten A321 planes. In-flight broadband service would be made available on all these aircraft.

“We will get four Dreamliners and two A321 aircraft this year. By end of 2021, we will be offering in-flight connectivity in 10 aircraft,” Kannan said.

According to him, a decision on offering the service in domestic flights would also depend on routes where Dreamliners and A321 aircraft would fly.

“We will initially look at offering broadband service. We have not decided on offering voice calls,” Kannan said.

Nelco MD and CEO P J Nath said the capability to provide both broadband and voice services would exist. It would depend on airline partners on the way they would like to package the services, he added.

“We are delighted that Nelco is spearheading in providing the long-awaited Aero in-flight connectivity services in the country. Vistara is first airline to sign up for this service,” Nath said.

Panasonic Avionics Corporation Vice President Tom Eskola said passengers would be able to access the service even at a height of 35,000 feet.

“We currently cover 99.6 per cent of routes on which aircraft fly. We are also migrating our system to generation 3 from generation 1. Vistara will have access to our generation 3 system when they start operation which will offer high-speed broadband service during flight as they get on the ground,” Eskola said.