After five rate cuts in a row, the Reserve Bank of India (RBI), in a surprise move, hit the pause button and held repo rate at 5.15%. There was widespread expectation among economists that to spur the economy, which continues to be in a tailspin, the government would further cut the repo rate.

The RBI has been on a rate cutting spree this year, slashing the repo by 135 basis points (1.35 percentage points) since February in five successive cuts. The repo rate is the rate at which commercial banks borrow money from the Reserve Bank of India (RBI). Economists, in general, had predicted a rate cut again, since RBI has been maintaining an “accommodative” policy stance while keeping an eye on raising inflation.

Thursday’s (December 5) pause conveys the increasing importance of inflation number in framing monetary policy while underscoring the fact that successive rate cuts have failed to power India’s growth engine. The downturn in the economy has been continuing with the second quarter GDP growth rate falling to 26-quarter low of 4.5%. The government continues to struggle with ways to boost consumption demand. 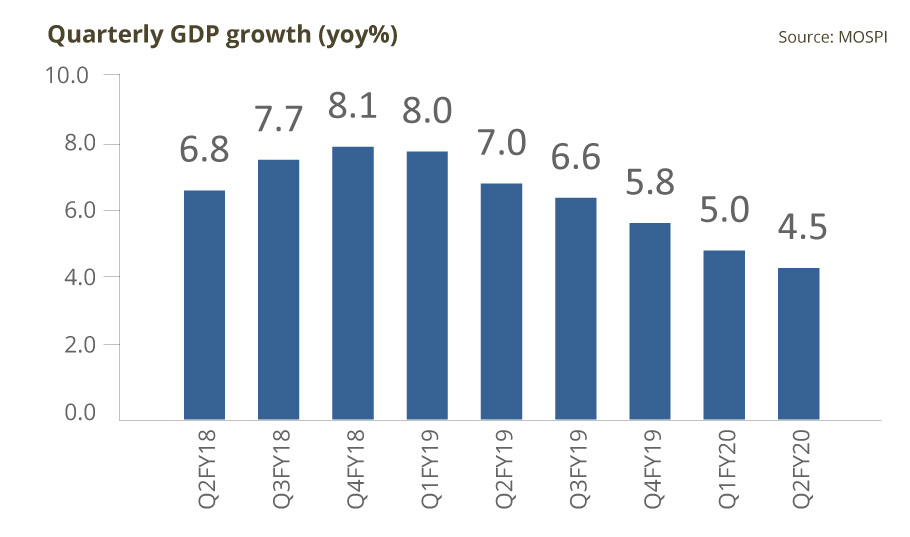 Since the economy has been faltering quarter on quarter the RBI had to roll back its GDP growth estimates for 2019-20. It began the fiscal with projections of 7.4% GDP growth and then revised this downwards in each of its subsequent bi-monthly monetary policy announcements. The latest projection of GDP growth is just 5% this fiscal – a full 240 basis points lower than the initial surmise. Since the Q1 and Q2 GDP growth rates have been 5 and 4.5%, RBI is banking on GDP growth for the second half of the fiscal to be 4.9% and 5.5%.

So what is worrying the RBI?

Inflation: The RBI has raised Consumer Price Index (CPI) inflation projection to 5.1 – 4.7% for the second half of 2019-20 (period from October 2019 to March 2020) from 3.7 – 3.5% projected in the last policy statement. The sky rocketing prices of onions are obviously a cause for concern as is the continued rise in prices of other vegetables, milk, pulses and sugar. The RBI has said that vegetable prices will soften only by February next year, when late kharif crops arrive and supply augmentation through imports.

So will onions (besides other staple vegetables) continue to bring tears to the common man for another two months? The RBI statement says inflation will rise in the near term and moderate only by the July-September quarter of 2020. 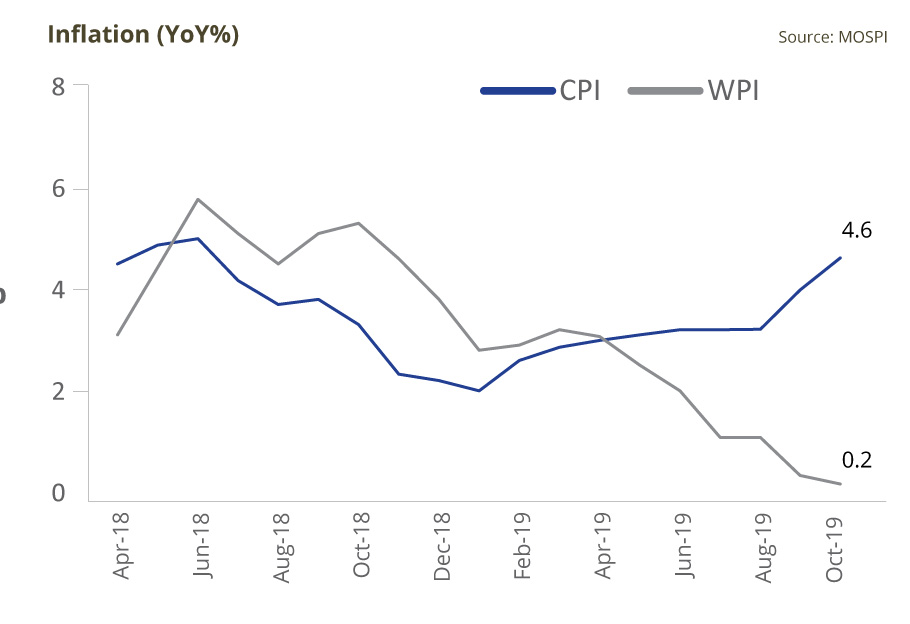 Analysts at Kotak Institutional Equities said that recent inflation prints, “have taken precedence over the growth concerns. In fact, seemingly, the RBI is pushing the onus of growth support to the government. Further, the RBI wants to wait and watch the effect of government’s measures and RBI’s past rate cuts.”

Analysts add that the possibility of any further rate cut in the next monetary policy meeting scheduled for February 2020 with depend on inflation prints and whether late kharif output actually help in cooling vegetable prices – specially onion prices.

Growth: The RBI in its October policy had projected the real GDP growth for 2019-20 at 6.1% as against Q2 growth at just 4.5%. The RBI says that various high frequency indicators suggest that domestic and external demand conditions have remained weak. Based on the early results, the business expectations index of the RBI’s industrial outlook survey indicates a marginal pickup in business sentiments in Q4.  The central bank says the monetary policy easing since February 2019 and the measures initiated by the government in the form of corporate tax cuts are expected to revive sentiment and spur domestic demand. At the same time, any delay in revival of domestic demand, a further slowdown in global economic activity and geo-political tensions remain as downside risks.

Commenting on the economic slowdown, former Union finance minister P Chidambaram said on Thursday that the problem was the government’s assumption that current troubles being faced by the economy were cyclical.

“The government is wrong. It is unable to look for the obvious clues because it is stubborn and mulish in defending its catastrophic mistakes like demonetisation, flawed GST, tax terrorism, regulatory overkill, protectionism, and centralised control of decision-making in the PMO,” Chidambaram said. 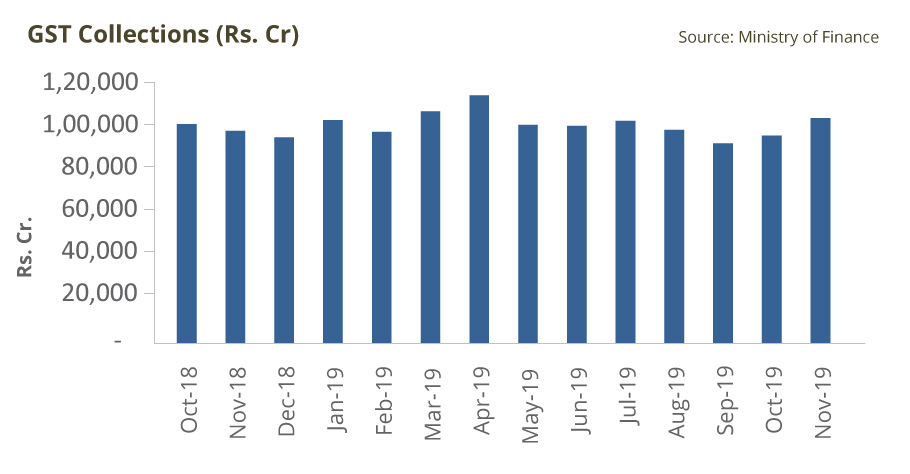 He referred to the steady fall in GDP growth rate in the last six quarters and said that the government has “turned out to be an incompetent manager of the economy with the prime minister maintaining an unusual silence.” He added that the economy has been left to the ministers who are indulging in “bluff and bluster.”

It is known that manufacturing has been slowing but the quantum of the slowdown is rather shocking. The RBI policy statement said on Thursday that capacity utilisation fell to 68.9% in the July-September quarter this fiscal from 73.6% in the immediate preceding quarter. In other words, nearly a third of India’s factory capacity was sitting idle last quarter, up from nearly a fourth in the April-June period as consumption slowdown resulted in lower use of installed capacities across plants. Not just manufacturing, growth in services too moderated. 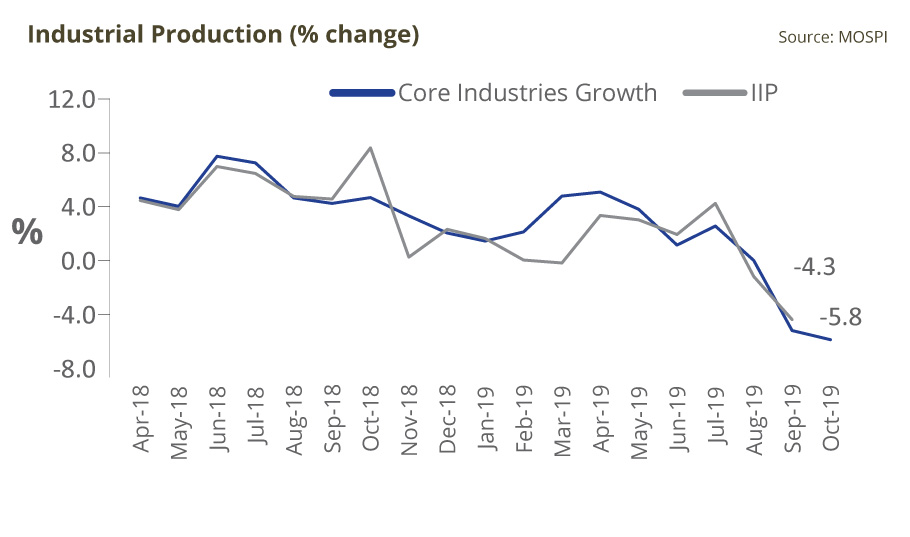 Contraction in output of eight core industries – which account for 40% of the index of industrial production (IIP) – extended into the second consecutive month in October and became more pronounced, dragged down by coal, electricity, cement, natural gas and crude oil. However, output of fertilisers rose sharply, reflecting expectations of robust sowing activity in the Rabi season. According to the early results of RBI’s industrial outlook survey, overall sentiment in the manufacturing sector remains pessimistic in the ongoing quarter (October-December) due to continuing downbeat sentiments on production, domestic and external demand and the employment scenario.

The Monetary Policy Committee (MPC) still feels that there is monetary policy space for future action. However, “given the evolving growth-inflation dynamics, the MPC have thought it appropriate to take a pause at this juncture,” the RBI said. Perhaps what it left unsaid by the RBI was that the government now needs to step in with measures to boost consumption demand, for the slowdown to bottom out.