Passenger vehicle (PV) sales numbers have thrown a surprise in an economy in a free fall, when major sectors, especially the manufacturing industry, are expected to have taken a major hit.

The factory dispatches of PVs grew 26.5 per cent in September from a year earlier to 2,72,027 units, according to figures made available by the Society of Indian Automobile Manufacturers (SIAM), an industry body for the auto sector. It said there is sustained demand for compact SUVs and compact cars in rural and semi-urban areas.

Comparing current sales with the previous year’s figures, however, could be misleading. That is because in the previous year, higher taxes and reports about the change in emission norms from BS-IV to BS-VI, coupled with the Centre’s focus on introducing electric cars sooner than later, had resulted in poor demand.

What is noteworthy though is that the sector has not posted negative numbers. Therefore, it is important to take a deep dive to find out what really moved the needle.

Ambit Research, which recently interacted with key executives of leading automobile companies and automobile component makers, said a strong demand recovery is underway in India and key export markets. But this could be just pent-up demand, which makes it seem that there is growth. Sales could actually dry up once the backlogs are taken care of.

Passenger car dealers across the country, according to various reports, have indicated that festive season sales might actually remain flat. 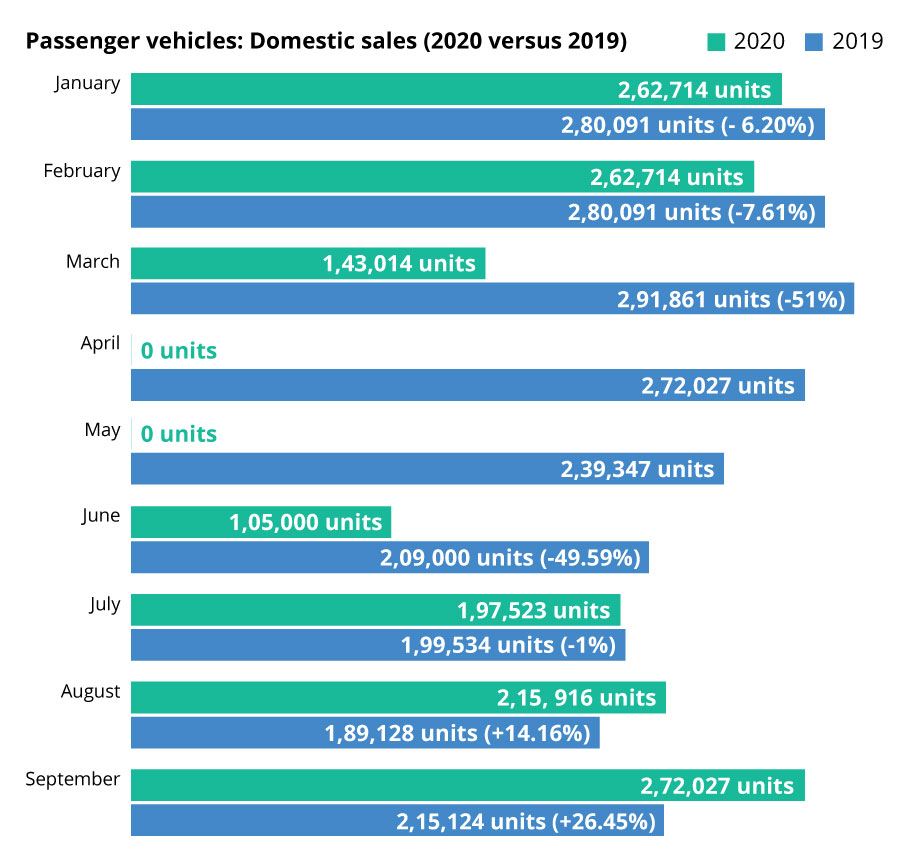 The Indian passenger car industry has had to deal with high taxation as successive governments have seen it as a luxury segment. As a result, it has grown at a very slow pace. In the fiscal year that ended March 2019, over four million passenger vehicles were produced across India. But what is significant is that it took more than seven years for the numbers to increase from three million to four million. Of the three million cars, about three million were sold in the domestic market. 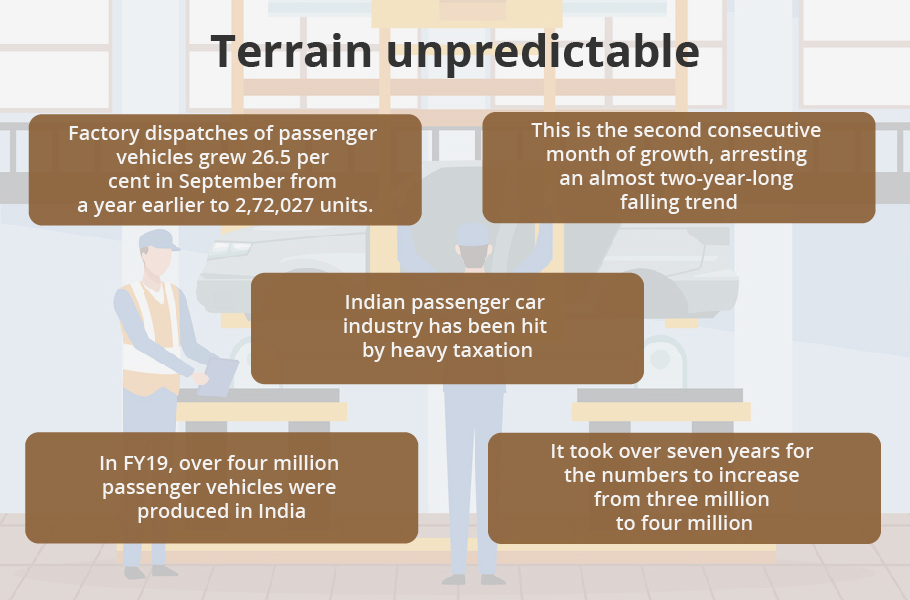 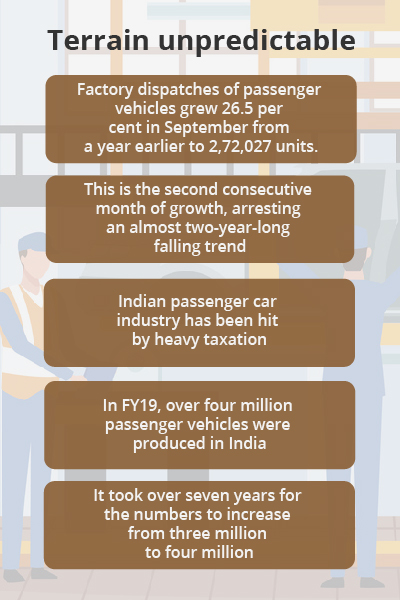 While most sales happened in the A and B segments of the market, there was a substantial pickup in the sale of compact SUVs, with Maruti Suzuki’s Vitara Brezza being the most sold at 1,27,000 units. Maruti Suzuki has so far sold five lakh units of the model since its launch four years ago.

But the high taxation is a big worry for the sector. A top executive of Toyota Kirloskar recently said that the company may stop producing more cars — in other words, stop expanding production — if the government continues with its policy to tax the sector heavily. The reported statement was hastily denied but the truth is that the sector is milked the most by the ruling party at the Centre to make up for any shortfall in revenues.

Related News: Indian economy to contract by 10.3% in 2020; worst contraction on record: IMF

At present, luxury cars are taxed at the highest level of 28 per cent under GST; 20 per cent GST is imposed on sedans and 22 per cent on SUVs. Clearly, the government believes that higher taxation on passenger cars will benefit citizens as it will provide enough money to build infrastructure. What has escaped the minds of the bureaucrats at the Centre is that lower taxation will actually boost the growth of the passenger car segment, known as the backbone of any economy.

However, the government is unlikely to give in to the demand of the sector as it needs all the revenues it can mop up after the COVID pandemic more than flattened the economy. Giving sops to the auto and aviation sectors would, perhaps, be last on its priorities.

Instead, the government wants the auto sector to look inwards, reduce the royalty it pays to foreign parents, bring down costs and become more efficient. According to reports, automobile companies pay as much as ₹10,000 in royalty every year, which, if pruned to lower levels during the crisis, will help the sector sustain its operations for a longer period of time. Finance Ministry officials have repeatedly pointed out that the GST on passenger cars is  much lower than what they were before the uniform tax was introduced.

Related News: Up goes China’s economy as COVID-19 slows down the world

With the sector showing signs of recovery, passenger car manufacturers may not have much to complain. What they can do, however, is to usher in more automation in production, which is quite common at manufacturing plants across the globe. This will lead to fewer blue-collar jobs and, perhaps, more protests even from trade unions but there seems to be no other way out for automobile manufacturers to continue with their operations in India.

Motorcycle enthusiasts can check out these affordable bikes to inves...