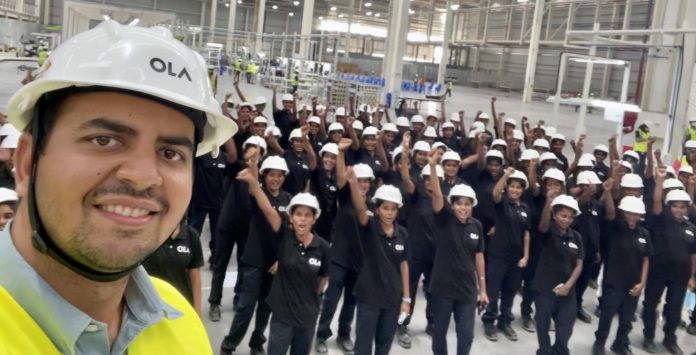 The two-wheeler manufacturing facility welcomed its first batch of workers this week.

Turning quite the trend-setter, Ola Electric has announced that its Futurefactory will be run entirely by women and be the largest women-only factory in the world. The sprawling two-wheeler manufacturing facility in Krishnagiri, Tamil Nadu, welcomed its first batch of workers this week.

Bhavish Aggarwal, Chairman and Group CEO, announced proudly on Twitter: “Aatmanirbhar Bharat requires Aatmanirbhar women! Proud to share that the Ola Futurefactory will be run ENTIRELY by women, 10,000+ at full scale! It’ll be the largest all-woman factory in the world!! Met our first batch, inspiring to see their passion!”

The CEO also declared that it was just the first in a series of initiatives Ola was undertaking to create a more inclusive workforce and provide economic opportunities for women across the board.

Proud to share that the Ola Futurefactory will be run ENTIRELY by women, 10,000+ at full scale! It’ll be the largest all-women factory in the world!!🙂

Met our first batch, inspiring to see their passion!https://t.co/ukO7aYI5Hh pic.twitter.com/7WSNmflKsd

“India’s women will bring the EV revolution from India to the world! When women are equal participants in India’s economic growth, India will lead the world!” Aggarwal tweeted.

In a linked blog post, he said: “We have invested significantly in training and upskilling the women workforce in core manufacturing skills and they will be responsible for the entire production of every vehicle manufactured at Ola Futurefactory. Enabling women with economic opportunities improves not just their lives but that of their families and, indeed, the whole community. In fact, studies show that just providing women parity in the labor workforce can grow India’s GDP by 27 per cent.”

“But this requires active and conscious efforts from all of us, especially in manufacturing where participation remains the lowest at just 12 per cent. For India to be the world’s manufacturing hub, we must prioritize upskilling and generating employment for our women workforce,” the post said.

Ola is preparing to begin sales of its maiden electric scooter, the S1 and S1 Pro, this week. Buyers will be able to purchase the vehicles, priced at Rs 99,999 and Rs 1,29,999, respectively (ex-showroom including FAME II subsidy and excluding state subsidies), from September 15. The vehicles will come with a three-year, unlimited-kilometre warranty for their battery packs.

The company will also provide a portable 750 W charger with both scooters, and has said that fully charging the S1 at home will take around five hours, while a full charge for the S1 Pro at home will take six hours and 30 minutes. Ola is also setting up a “Hypercharger” fast-charging network across India.

“Ola Futurefactory is one step towards our vision of the world’s future – a world with clean mobility, a carbon-negative footprint, and an inclusive workforce,” Aggarwal said. The factory will have 10 production lines running at full capacity and is expected to be the most advanced two-wheeler factory with 3,000 AI-powered robots built on Industry 4.0 principles.