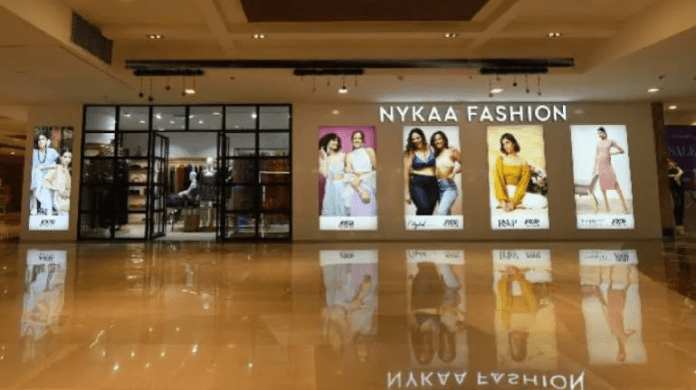 Nykaa, founded in 2012 by Falguni Nayar, sells around 4,000 beauty and personal care products and fashion brands on its website and app as well as physical stores. Pic: Twitter

Beauty products e-tailer Nykaa on Wednesday, November 10, made a spectacular stock market debut, with its shares rising nearly 80% after they were listed on the Bombay Stock Exchange (BSE) and the National Stock Exchange (NSE). The listing was made about 10 days after the e-commerce firm’s stellar initial public offering (IPO) that closed on November 1, where its shares were subscribed by 82 times.

Nykaa is India’s first woman-led unicorn to hit the stock exchange, media reports have observed. As the shares surged on their first day on the bourses, Falguni Nayar, the company’s founder who holds a nearly 50% stake, saw her fortunes go up in tandem. At $6.5 billion, she is now India’s wealthiest self-made female billionaire, according to the Bloomberg Billionaires Index. (The wealthiest woman in India, across categories, is Savitri Jindal, Chairperson Emeritus of the OP Jindal Group that was founded by her late husband OP Jindal.)

The company, as part of its ₹5,352-crore IPO, issued fresh equity shares aggregating to ₹630 crore; there was also an offer for sale (OFS) of about 4.2 crore shares by promoters and other existing shareholders. The three-day IPO was subscribed 81.78 times, indicating the confidence that retail and institutional investors held in its business fundamentals and revenue model.

Nykaa, founded in 2012 by Nayar, a former investment banker, has stuck to the traditional e-tail model, selling around 4,000 beauty and personal care products and fashion brands on its website and app, rather than adopt a marketplace model like Flipkart or Amazon. It has an offline presence as well, with about 80 brick-and-mortar outlets across 40 cities.