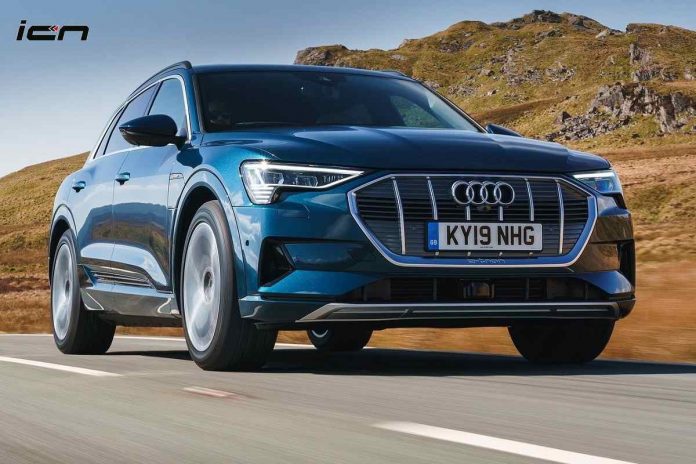 Implied generosity in the highly competitive space of luxury ecars is rare and truly riveting. Feel the mega voltaic effect of Mercedes-Benz’s marketing message. The special creative on its social media handles welcomes the new electric SUV to the country, the Audi e-tron – its arch rival.

The stress remains on expanding the EV ecosystem, a push that Merc showcases with élan.

For the record, the e-tron is priced between ₹99.99 lakh and ₹1.18 crore (ex-showroom, India). On Thursday, Audi launched its first electric vehicle, the e-tron range, in the country.

Jaguar got a welcome, too

This is not the first time that Mercedes-Benz India has extended a brotherly handshake to one of its rivals. In March, when Jaguar Land Rover India launched the I-Pace, Mercedes-Benz posted a similar advert welcoming the electric crossover to the country.

The new creative also displays a car parking grid which is shaped like a battery cell with two empty spots for the I-Pace and the new e-tron.

The Stuttgart-based automaker welcomed Audi e-tron via a message on social media. Its tweet read: “There’s always room for more in the electric future. Welcome @AudiIN. Our wide network of electric charging stations are open for you, as they are for @JaguarIndia.”

Mercedes-Benz India operates more than 100 EV chargers in the country, which, as the company’s recent message on social media notes, can be accessed by not only by the owners of its EQC model, but also by those of the Jaguar I Pace and Audi e-tron electric SUVs.

The Mercedes-Benz EQC 400 was launched in India last year at an introductory price of ₹99.3 lakh (on-road, India), but it currently retails at ₹1.04 crore.

Also read: Soon, you can lock or unlock your car with Google digital key

Audi India has launched both the regular e-tron SUV and the e-tron Sportback coupe SUV. The former will be available in two variants — 50 and 55 Quattro, whereas the Audi e-tron Sportback will go on sale in the single top-spec 55 Quattro variant.

The company has said that customers who buy the electric SUVs in 2021 will receive two chargers as part of the purchase. One will be an 11 kW compact charger, and the other will be an additional wall-box AC charger that can be set up as per the needs of the customer.

Audi dealerships in India will be equipped with 50 kW DC fast chargers as well, and these will be set up in a phased manner.