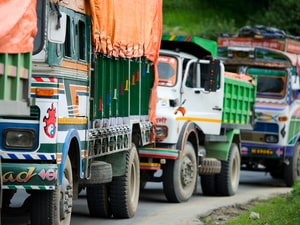 With the second wave of COVID showing strong signs of abating, India’s economic indicators are looking up, too. While experts still advocate caution — considering past experiences with the pandemic and the challenge posed by virus variants — the economic green shoots are hard to miss.

On Thursday, a Bloomberg report said the ratio of upgrades to downgrades in ratings and credit outlooks by the Indian arms of S&P Global Ratings, Moody’s Investors Service and Fitch Group has improved in the current quarter.  At 1.2, it is set to be the highest in about three years, reveal Bloomberg data.

“Local companies are facing fewer downgrades during the second wave of the pandemic than during the first wave as most of them have bolstered their liquidity in the past couple of quarters, thanks to all the pandemic support announced by policymakers,” said K Ravichandran, Deputy Chief Rating Officer at ICRA, a domestic arm of Moody’s.

The GST revenue collected in May stood at ₹1.03 lakh-crore, crossing the ₹1 lakh-crore mark for the eighth month in a row. Considering April and May witnessed the worst of the second wave of the pandemic, it can be assumed that from now, the GST mop-up will only improve further.

Media reports said daily eWay bill generation crossed 16 lakh in June as unlock measures introduced by states eased supply chain constraints and had transport vehicles moving again. The June 2021 average number is an improvement both sequentially and year-on-year — against May 2021 and June 2020, respectively.

CBDT numbers also reveal direct tax collections for FY22 till June 15 have jumped 100.4% to ₹1,85,871 crore, vis-à-vis ₹92,762 crore in the same period last fiscal. Experts view this as a significant sign of the economy showing resilience despite COVID-led disruptions.

On the jobs front, too, the picture seems a tad brighter, though not near pre-COVID levels yet. Earlier this week, the Centre for Monitoring India Economy (CMIE) said the unemployment rate for the week ended June 13 fell to 8.7% from 13.6% the previous week, as jobs in the informal sector began to pick up with the easing of lockdown curbs.

Urban unemployment fell to 9.7% from 14.4%, while the rural numbers dipped to 8.2% from 13.3%. On similar lines, Google’s Community Mobility Report data tracking public transport and workplaces has revealed that activity levels have begun to pick up in recent weeks. A Bloomberg report noted that electricity consumption, a widely used parameter to asses demand in the industrial and manufacturing sectors — is looking up.