On the May 13, India banned the export of wheat despite asserting earlier that 10 million tonnes would be exported this year against a little over 7 million tonnes last year. The ban came even as the military conflict in Ukraine choked Russian and Ukrainian wheat exports.

Earlier, on April 13, Indonesia banned the export of palm oil in all forms – crude, refined and used – to quell domestic prices which had doubled to $2/litre.

In a Zoom interview, The Federal asked NITI Aayog Member Ramesh Chand whether export bans were compatible with free trade and whether they would not have a chilling effect and force countries to adopt inefficient import substitution strategies. 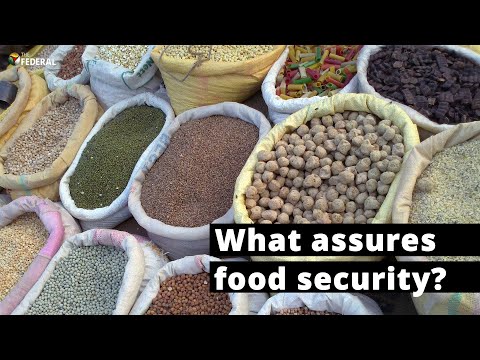 Sand in the wheels of international food trade does not affect India much because it is self-sufficient in cereals, said Chand. He addded that India depends on imports to meet about 7-8 per cent of its pulses requirement.

It’s only in the case of cooking oil that it is vulnerable because India imports about two-thirds of the quantity it needs.

Free trade is based on comparative advantage – that every country produces what it is best at, maximising consumer welfare, Chand pointed out. But if countries cannot depend on trade in crunch situations, they will have to take countervailing measures which may not be the most efficient, he added.

Chand further said that he had proposed that India insulate itself for 90 per cent of its requirement of staples. Hundred per cent self-sufficiency would be costly. For cooking oil, Chand said, India must strive to reduce its import dependence by half to about 35 per cent. This could be achieved with high import duties, as it happened when Rajiv Gandhi was Prime Minister. Import duties then were as high as 85 per cent. High domestic prices encouraged farmers to bring more area, including irrigated land, under oilseeds. But when import duties were reduced, the output of oilseeds shrank, he recalled.

India’s high import dependence for cooking oil was also because of a more than doubling of oil consumption in the past two decades, which again was on the back of cheap oil imports, said Chand. He said reduced import dependence would have to be achieved through yield increases and technological breakthroughs.

When reminded that the government had not allowed the cultivation of genetically-modified Dhara Mustard Hybrid 11 (DMH-11) despite a recommendation by the Genetic Engineering Appraisal Committee (GEAC) in May 2017, Chand said there was consumer sensitivity around genetically-modified food. He said he had read the paper on DMH-11 and was convinced that it was high-yielding, but people’s sensitivities could not be ignored.

Chand further said the government had taken a middle path and approved guidelines for genome editing, where the biosafety requirements were much less onerous when foreign genes were not involved.

Also read: From G7 nations to traders to farmers, India’s wheat export ban has pleased none

As Chand has more than 30 years of experience as an agricultural economics researcher, teacher, administrator, and policy advisor, The Federal asked him a range of questions – from buffer stocking norms to cash transfers in lieu of subsidised food grains for the poor.

He said high buffer stocks had helped India tide over the crisis created by the COVID pandemic. During the lockdown of 2020 and restricted mobility thereafter, grains stocked in government warehouses helped feed the poor who had lost jobs and income. During 2019-20, an additional 103 lakh tonnes of grain was distributed to the poor. The next year, 119 lakh tonnes more was distributed, noted the NITI Aayog member.

When asked whether buffer stocking norms should be revised in light of the experience during the pandemic, he said they were revised every seven years, and a revision was due.

The pandemic had also shown that payment of food subsidy in cash was no substitute for delivery of food aid in kind. Markets in India are not uniformly efficient, he said. During the pandemic, supplies were choked, and people would not have been able to buy grain or in sufficient quantities if they had been given food subsidy in cash.