A historical analysis of petrol prices over the last decade has shown that the BJP-led government has been collecting more taxes on fuel, compared to the previous UPA government.

In the wake of the coronavirus outbreak, the global crude oil prices have been crashing for over a month, bringing current oil prices as low as $30 a barrel. However, no major decline has been witnessed in retail prices of petrol in accordance with the fall in global prices. Instead, the government recently increased the excise duty on petrol and diesel.

After a ₹3 hike recently, the excise duty on petrol stands at ₹22.98 per litre and that on diesel at ₹18.83 per litre. It should be noted here that when the Modi government assumed office in 2014, the taxes were at ₹9.48 and ₹3.56 per litre for petrol and diesel respectively. 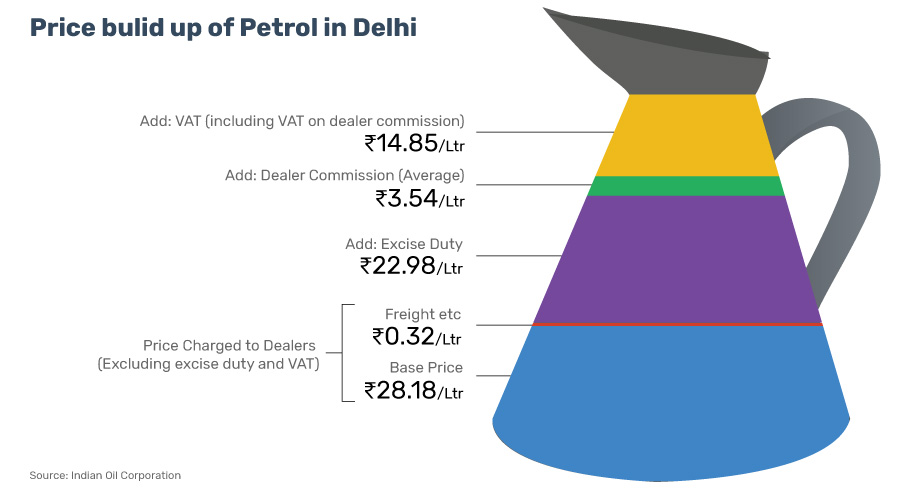 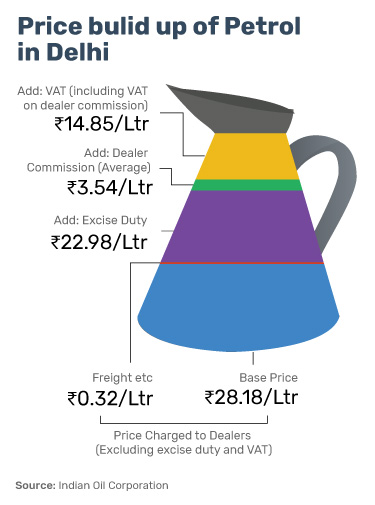 The retail prices of petrol and diesel, however, will not be hiked as the difference has been adjusted by oil companies within the current price structure. The Centre, however, would garner an additional revenue of ₹39,000 crore, through the hike in excise duty in addition to the revenue of around ₹2.48 lakh crore per annum.

When we look at the history of global prices of crude (in $) and the retail rate of fuel (in ₹) in the Indian market, a clear trend of an increasing gap between the two (even factoring conversion rates) can be seen over the past decade. The price difference is a result of increase in excise duty and taxes by the government. During the UPA regime, from 2011 to 2014, the crude oil prices ranged from $74.33 to $102.15 per barrel. Accordingly, the retail prices ranged between ₹61.5 and ₹78.7 at that point in time. 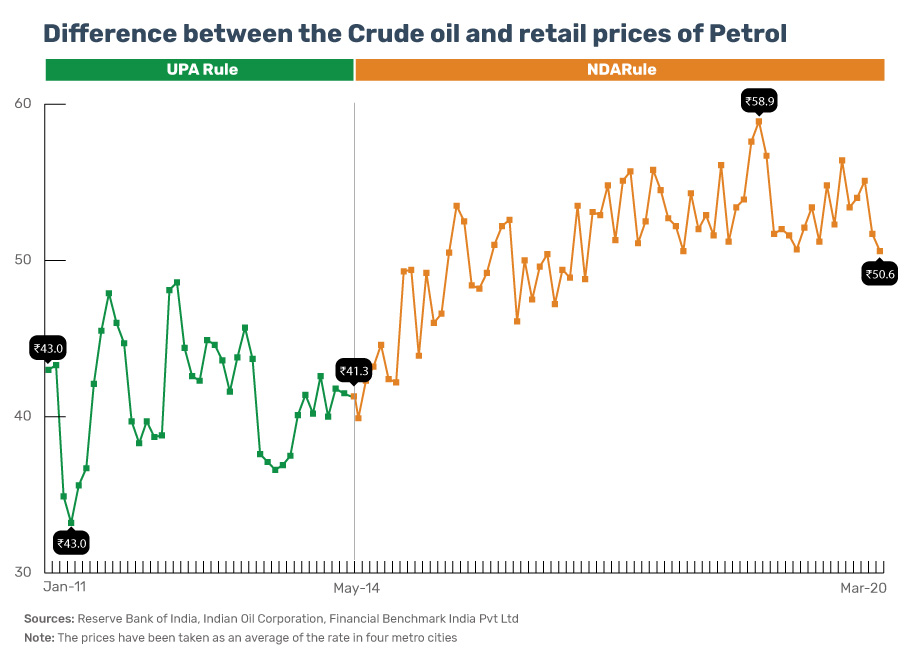 The difference* in crude oil and retail prices ranged between ₹33.2 and ₹48.6 during the UPA regime while it has spanned across ₹39.9 to ₹58.9 since the NDA came to power. This clearly shows the increase in taxes on fuel.

Also, this does not fall in line with the decision of following global prices to render maximum benefit to the end-user. The BJP government had a price advantage due to the global prices as they went as low as $24 per barrel in February 2016. Even then, the retail price was at ₹62.6 per litre. The crude oil prices ranged from $98 to $23 per barrel during the last six years. Meanwhile, the retail prices did not plunge in accordance with the decline in global prices.

Fuel prices in India had been in sync with global prices since 2017 after the government dismantled the Administered Price Mechanism (APM) system in the country. Under APM, the government controlled the price of hydrocarbon-based products in the country. Currently, the retail price of petrol or diesel is affected due to a number of taxes in addition to the base price and freight charges. It includes excise duty, dealer commission and value added tax (including a tax on dealer commission) which together rounds off to around ₹41.37 per litre. The same structure is followed for the diesel prices with lesser excise duty.

The Congress recently took a jibe at the BJP government for a hike in excise duty. Also, it wants the government to decline the price of fuel by 35-40 per cent, said Ajay Maken, a senior Congress spokesperson.

The Congress has claimed that when the price of crude oil in global markets was at $102 per barrel, even at that time the then government had maintained the price at around ₹62 per litre for retail sales.

*Note: The difference has been calculated as the difference between crude oil prices per litre according to the then exchange rates and retail price of petrol at that point in time.