Leading dairy producer Amul and milk supplier Mother Dairy on Saturday (December 14) announced an increase in milk prices in Delhi-NCR due to a reduction in supply and increase in procurement costs.

The new prices will be effective from Sunday (December 15).

Mother Dairy has increased the prices for different types of milk by ₹2 per litre. 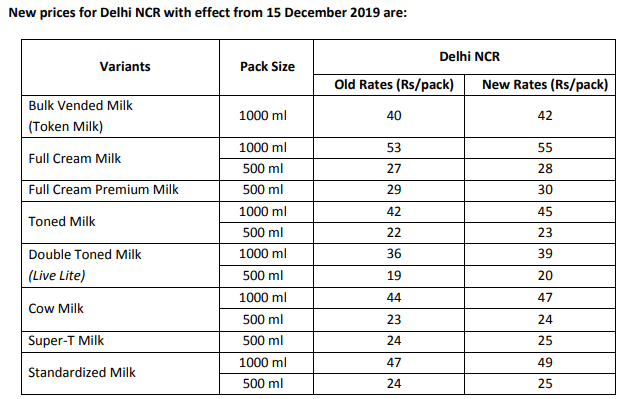 “This has impacted the prices paid to milk producers. The raw milk prices, which in a normal year come down during the winter months, have firmed up substantially,” it said.

The prices paid to milk producers have increased by about ₹6 per litre in the last few months, up by almost 20% compared to the corresponding period last year. Mother Dairy said that it was compelled to raise prices in Delhi-NCR for all its milk variants with effect from December 15, 2019 due to lower supply and increased procurement costs.

It said it passes close to 80% of the sales realisation from milk towards its procurement.

Mother Dairy supplies more than 30 lakh litres of milk per day in the Delhi-NCR market through retail outlets.

Amul’s ₹2 hike in prices will be effective in Ahmedabad and Saurashtra markets of Gujarat, West Bengal, Mumbai and Maharashtra as well, apart from Delhi-NCR.

However, there will be no change in the price of Amul Shakti (pasteurised milk), which is sold for ₹25 per 500 ml.

The Gujarat Cooperative Milk Marketing Federation, which markets dairy products under Amul brand, said in its statement, “This year, the price of cattle feed has increased by more than 35%. Considering the increase in cattle feed and other input costs, our member unions have increased milk procurement price in the range of ₹100 to ₹110 per kg fat, which is more than 15% increase than the previous year, for the 36 lakh milk producers of Gujarat,” the statement said.

Amul also said that it passes on almost 80 paise of every rupee paid by consumers for milk and milk products to the producers.

The statement added that this increase in milk prices has been done with an aim to sustain remunerative price to milk producers and encourage them for higher milk production.

The GCMMF supplies 1.4 crore litres per day of milk across India, out of which 33 lakh litres goes for Delhi-NCR.

The hike in milk prices comes amid a soar in onion prices, with the rates ranging between ₹160-₹200 per kg.