Despite the present lockdown, the best-case scenario for India is that at least 15 crore people may be infected with coronavirus by the end of May. In the worst case, the figure could cross a staggering 24-crore mark with Maharashtra, Kerala, and Delhi being the worst-affected states and Union Territories.

According to an India-specific study on the spread and impact of coronavirus carried out by the Centre for Disease Dynamics, Economics and Policy (CDDEP), increased testing and strict implementation of social distancing, rather than lockdown, will hold the key in flattening the virus curve in the coming months. 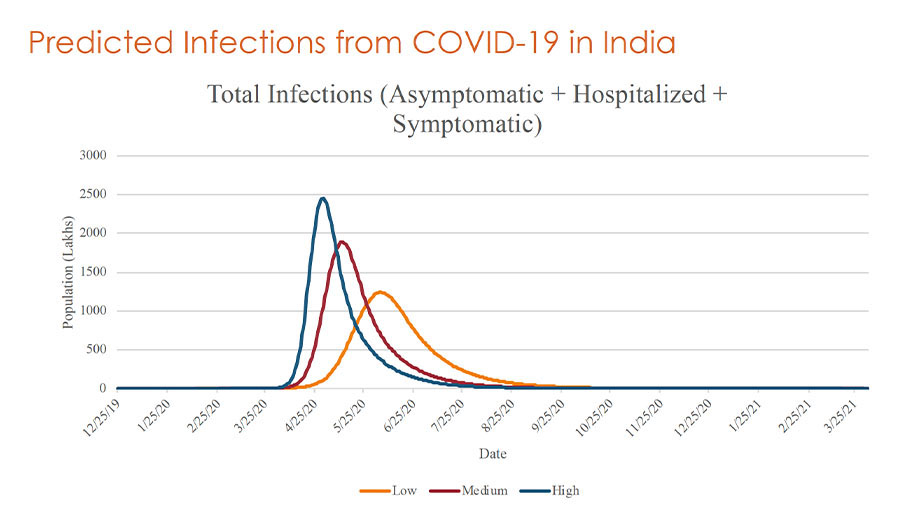 The community transmission may have already started in the country early this month and the travel ban may have come a bit late in the day, the report stated.

The report projected multiple scenarios based on factors like efficacy of preventive measures, healthcare facilities, compliance with social distancing, demography and weather conditions.

For a country of 1.3 billion people with a broken healthcare system, the most optimistic scenario is the spread will be limited to 150 million, if the virus weakens on its own and social distancing is followed strictly till at least June.

The report pointed out that unlike other countries, a major chunk of India’s population comprises young people and this can play out in its favour. The kicking in of summer could also be a boost. “Temperature and humidity increase should help us in reducing the case load,” it said. 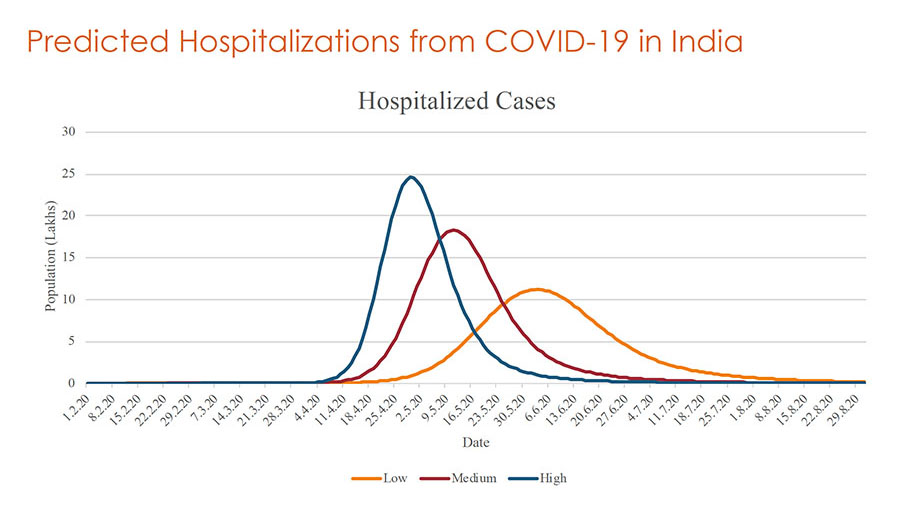 Right now, India should concentrate on increasing the testing. Not only will it help catch cases early, it will also nudge the people to take the problem more seriously, the report said.

Lockdown could be counter-productive

“A national lockdown is not productive and could cause serious economic damage, increase hunger, and reduce the population resilience for handling the resilience peak,” the report warned.

Instead, the researchers emphasised on the need for implementing social distancing strictly.

Some states may see transmission increase only after another two weeks and lockdowns should be “optimized for when they could maximize the effect on the epidemic but minimize economic damage,” it suggested. 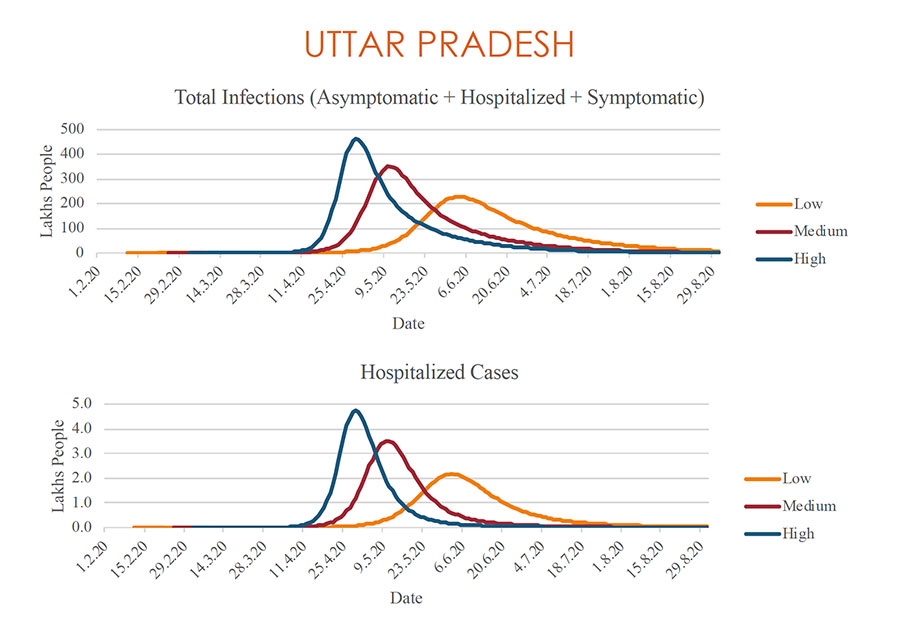 “Border closures at this stage have little to no impact and add further economic disruption and panic. While international transmission was important in the first stage, domestic transmission is now far more relevant,” the report pointed out.

The range of COVID-19 cases could be between 12.5 crore and 24 crore in the best and worst-case scenarios respectively.

As a steal for India, with decreased virulence, the peak will be around mid-June whereas in the worst-case scenario, where government interventions like rate of testing and social distancing fail and the worst peak phase will arrive at around April 25, the report said.

The study sees the effect of COVID-19 taper off completely August onwards.

The study has projected the numbers in three possible scenarios depending on the risk factor: high, medium and low.

The most likely scenario is that there will be medium spread of the virus if everyone complies with the lockdown, provided the virus doesn’t become more deadly. This will limit the spread of the infection to just under 20 crore in May before starting to die down. 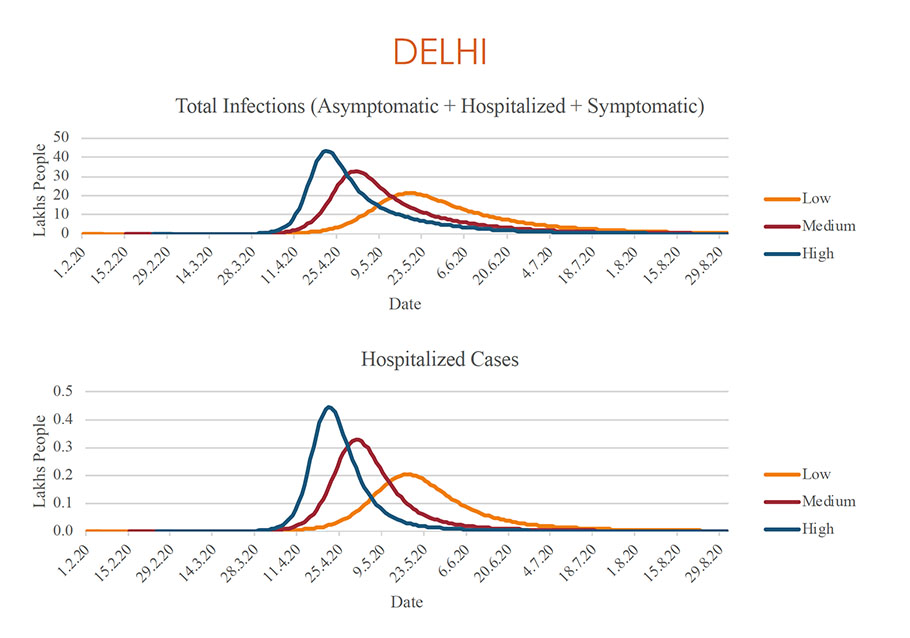 However, the infection could be high, even with the implementation of the lockdown, if social distancing is not followed strictly. This means that the total number of infections can skyrocket to 25 crore by April before starting to come down.

Surprisingly, in its worst estimate, the study has put India’s total hospitalisation requirement at just 25 lakh which is nearly one per cent of the total cases. Internationally, COVID-19 has seen well over a 10 per cent hospitalisation rate.

At such a juncture, India’s healthcare sector, which provides for 1 hospital bed per 2000 people and less than one lakh ICU beds and ventilators nationwide, could come under severe pressure.

The ventilator demand will most likely go up to 1 million even as the report pegs the current availability in India between 30,000 to 50,000 ventilators. Another factor that could further increase deaths in the general population is the mortality among healthcare workers, as per the report.

There is an urgent need to ensure an ample supply of personal protective equipment for healthcare workers. Without them, they can get sick, further straining the capacity of the healthcare system to respond to the ongoing outbreak. 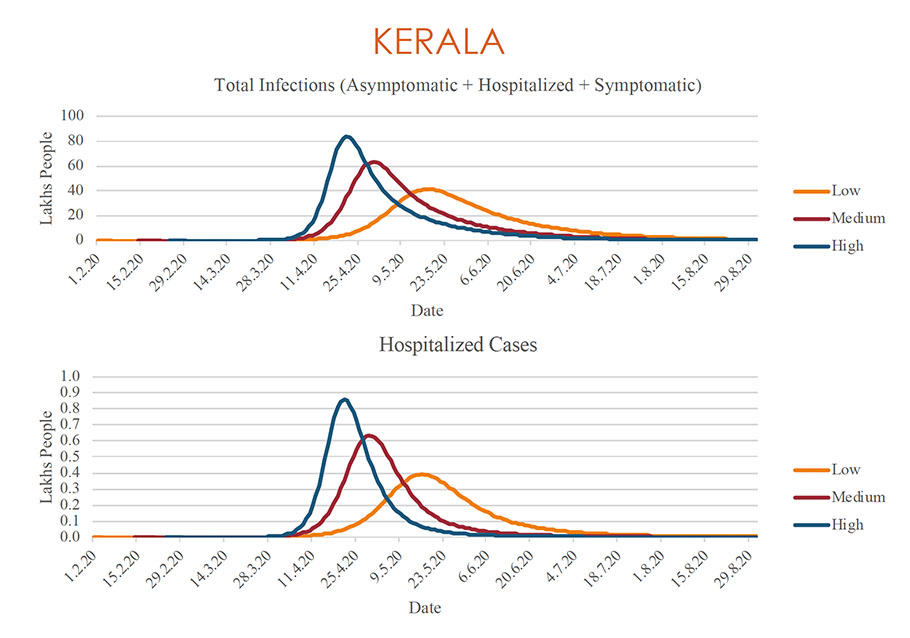 The report warned against delays in testing, saying it would reduce the ability of the population to protect itself.

“This is the most important way in which we can contain the epidemic. An increase in the official number of detected cases in the short term could encourage the population to take distancing more seriously and will reduce panic compared to a big spike later,” it said.

The lockdowns should be guided by testing and serological survey data and should be planned on a rolling basis, the researchers recommended.

“We should be prepared for multiple peaks and more cases and deaths later in the year,” the report cautioned.

The state-level estimates were driven by date of seeding of the epidemic based on available testing data, presence of major metro cities where initial transmission is more rapid, flight connections to Covid19-affected countries and age and demographic variables. 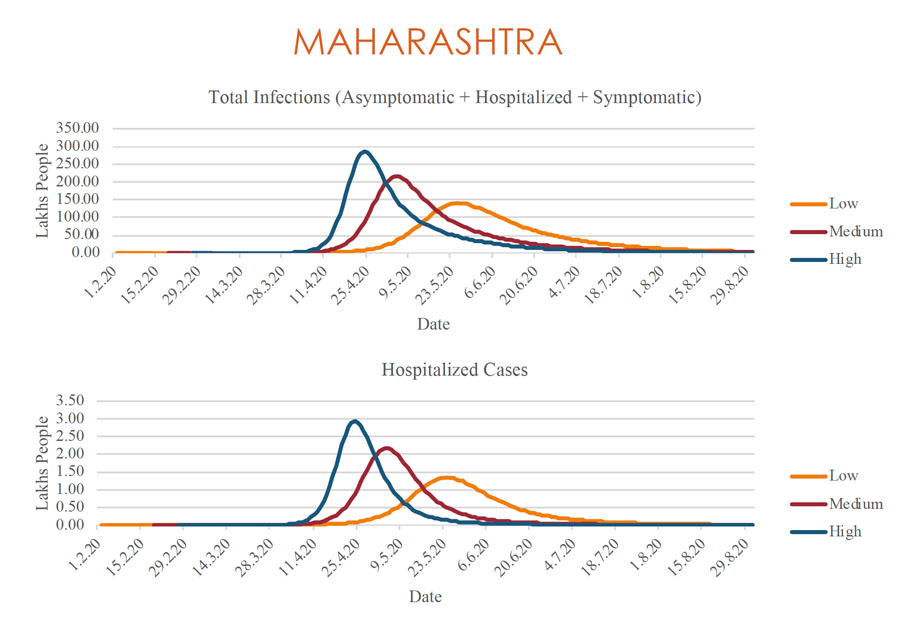 The report used IndiaSIM, a well-validated agent-based model of the Indian population. This has been published widely over many years and has been used for government decision-making.

Meanwhile, the social media took a complete U-turn on the report, with netizens asking the John Hopkins University if it was a study by their students since it is circulating widely across India.

Responding to such doubts, the JHU tweeted stating that it was not an authorised use of their logo and that they are in touch with CDDEP on it.

Speaking to The Federal, Ramanan Laxminaryan from CDDEP said, “There is some tweet storm going around on the Hopkins logo on our estimates.  I am appointed at Hopkins as is half the modelling team. But since we didn’t put our names on the slides, it is against Hopkins policy since it then appears as if it’s the university’s official position. This will be fixed tomorrow and their logo will be on.”

“JHU team was following their code and are not wrong. But they will put out a correction tomorrow” he added.

The Times of India via their fact check team also broke the news stating that the earlier reports carried by several other media houses were fake and the JHU has given their clarification.

New report co-authored by faculty w/ appointments at @JohnsHopkinsSPH uses strong scientific modelling based on available data & clear assumptions to help inform the #Covid19 response in India. Note: Its findings do not reflect the views of @JohnsHopkins. https://t.co/LCMMKcWImW pic.twitter.com/JkUh4nImrY

In a statement on Twitter, Johns Hopkins University said that a new report co-authored by faculty, with appointments at their public health university, uses strong scientific modelling based on available data and clear assumptions to help inform the COVID-19 response in India. It added that its findings “do not reflect the view of JHU”.

COVID: Centre to use PM-Cares Fund to set up oxygen plants in 100 ho...

Centre postpones NEET-PG exam due to ‘surge in COVID casesR...