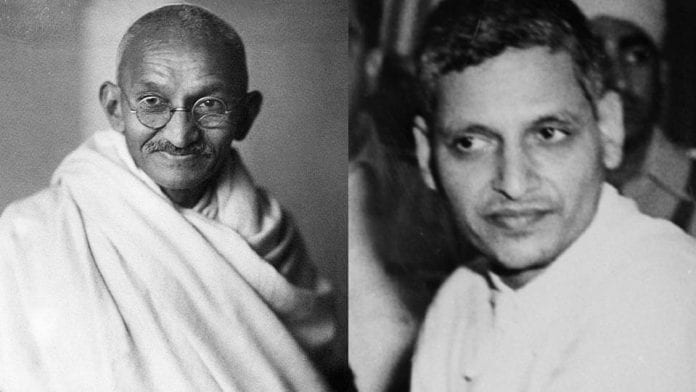 Nathuram Godse was a coward, a bigot and a puppet of darker forces that were envious of Mahatma Gandhi’s popularity among Indians. Those who call him a deshbhakt are either brainless bhakts or kambakhts (wretched).

What sort of man would empty a Beretta into a frail old man who preached and practised non-violence all his life? If tools employed by modern psychologists were available in 1948, they would have likely diagnosed Godse as a deeply troubled man with an inflated ego, a zest for melodrama and yearning for a dramatic act that would give him some identity – a sense of achievement to his meaningless existence full of failures.

Godse was the son of a village postmaster from Baramati. When his elder siblings died at an early age, his father started dressing him up as a girl to ward off evil influence. To ensure that he passes off as a girl, his mother made him wear a nath (nose ring) for several years. The boy who walked around in a nath soon got a name — Nathmal, which his parents later changed to Nathuram.

Nathuram did nothing of significance in life till he held that Beretta in his hand. After the nath was removed from his nose — after the arrival of a younger brother—he was sent to an English medium school. But, Nathuram failed to clear matriculation. In the end, he ended up opening a tailoring shop, considered an embarrassment for a Chittapavan Brahmin like him during those days. In a few days, even the tailoring shop was shut down.

In pre-Independence India, one refuge for such aimless tramps with a history of failures was the Rashtriya Swayamsevak Sangh (RSS). At its shakhas (branches), there was a culture — it still is — of treating everyone with unctuous appellations and assigning a larger meaning to life through liberal use of words like rashtra (nation), Hindu, sanskar and patriotism. Justice GD Khosla, who heard the review petition of Gandhi’s assassins, writes in his book, “At 22, he (Godse) joined the RSS — an organisation of which the avowed aim was to protect Hindu culture and solidarity. A few years later he shifted to Poona and became secretary of the local branch of the Hindu Mahasabha.”

Let’s pause, reflect and speculate about Godse’s life at this stage. He grew up confused about his own identity and sexuality. Perhaps he had repressed resentment against those who made him wear a feminine ornament on the nose and a sense of failure for not getting past school and shame for taking up a profession considered lowly for a Brahmin. Suddenly, he found acceptance and identity in an organisation devoted to the protection of Hindus and an ideology that was to later define his life.

You can’t miss the similarities between many rightwing extremists, jihadists and Godse. All of them essentially are men whose brains have been washed with religious propaganda and some high-sounding rhetoric about waging a war against enemies of their culture or faith. Their religious identities are just an accident of fate. In all likelihood, if Godse were born a Muslim in today’s age, he would have been an easy prey for the jihadist propaganda of Osama bin Laden or Abu Bakr al-Baghdadi.

Over the past few months, efforts are being made to build a myth around Godse. Such people, of course, are heroes for other bigots and extremists. But, the revisionist legend of Godse is built on fiction and falsities.

If all murderers and bigots were patriots, we would not have had any need for jails or mental asylums. But, contrary to popular perception, Godse is not a hero of Hindus either, or a poster boy of the saffron brigade. Godse is Hinduism’s biggest villain for killing the most devout practitioner of the faith. And, his vile act caused incalculable loss to the Hindutva brigade.

Ten days before he was killed, Gandhi had escaped an assassination bid by Godse and his gang. Madanlal Pahwa, a Punjabi refugee, detonated a guncotton slab a few metres from where Gandhi was leading the evening prayers in Delhi. In the ensuing melee, Godse and his accomplices were to attack Gandhi. But, one of them developed cold feet and the plan failed.

The next morning, Gandhi himself remarked on the incident: “You should not have any kind of hatred against the person responsible for this. He had taken it for granted that I am an enemy of Hinduism. Is it not said in chapter four of the Gita that whenever the wicked become too powerful and harm dharma, God sends someone to destroy them? The man who exploded the bomb obviously thinks that he has been sent by God to destroy me… But, if we do not like a man, does it mean that he is wicked?…”

“If then someone kills me, taking me for a wicked man, will he not have to answer God?… When he says he was doing the bidding of God he is only making God an accomplice in a wicked deed… Those who are behind him or whose tool he is should know that this sort of thing will not save Hinduism. If Hinduism has to be saved it will be saved through such work as I am doing. I have been imbibing Hindu dharma right from childhood. My nurse, who literally brought me up, taught me to invoke Rama whenever I had any fear… (H)aving passed all the tests I am as staunch a Hindu today as intuitively I was at the age of five or six… Do you want to annihilate Hindu dharma by killing a devout Hindu like me?” the Mahatma has been quoted (Mohandas: A True Story of a Man, his People, and an Empire, Rajmohan Gandhi).

Ironically, by killing Gandhi, Godse harmed the very idea he wanted to dominate post-Partition India. The outpouring of grief for Gandhi, the worldwide condemnation of his assassins and their ideology ensured that rightwing extremists were marginalised for nearly five decades in India. They owe their resurgence in today’s India more to LK Advani and Islamic terrorism than to Godse. As Sardar Patel, the Congress stalwart who has been co-opted by the right-wingers had predicted, the cowardly assassination advanced the Mahatma’s goals.

Godse, Justice Khosla writes in his memoir, spent the last days in jail regretting his act and declared that “were he to be given another chance he would spend the rest of his life in the promotion of peace and the service of his country.” (The Murder of the Mahatma: GD Khosla).

In contrast, Gandhi died like a man blessed by divinity, with “Raam, Raam” on his lips. As the first Indian governor general C Rajagopalachari said, “Nobody could die a more glorious death than Mahatma Gandhi. He was going to the seat of his prayer to speak to his Rama. He did not die in bed calling for hot water, doctor or nurses. He did not die after mumbling incoherent words… he died standing, not even sitting down.” Not to forget, he took the bullets on the chest.

The likes of Pragya Thakur, Sakshi Maharaj and the bhakts who call Godse a patriot and a Hindu hero should set aside their blinkers. Gandhi is the greatest patriot in the history of India. He is also the role model for Hinduism, and a hero of humanity.

Dirt in their mind: Sena on Congress booklet targeting Savarkar

UP revenue board suggests renaming Meerut as Nathuram Godse Nagar