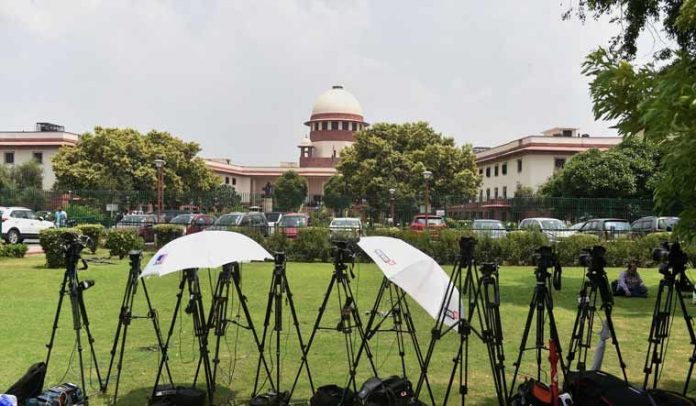 The Andhra government and the MP have knocked on all doors such as the magistrate court, the High Court, and the Supreme Court. File Photo

It is yet another case of using colonial powers’ draconian sedition law to settle scores with a political rival; this time it is in Andhra Pradesh and against ruling party MP K Raghu Rama Krishnam Raju who turned rebel against Chief Minister Jaganmohan Reddy and filed a petition to cancel CM’s bail in more than a dozen criminal cases.

The allegation of his wife was that Raju was arrested and tortured in custody to pressure the MP to withdraw the petition. Raju was arrested a week after he asked a CBI special court to cancel Jaganmohan Reddy’s bail in the disproportionate assets case. He wrote to the Prime Minister alleging that Jaganmohan Reddy was promoting evangelism in violation of the Constitution.

Raju’s relationship with YSRCP has been one of love and hate. He quit the party and returned to it before 2019 elections. On April 30, 2019, the CBI was directed to search his residences and his offices in a case of alleged loan default of over ₹ 947 crore, agency officials said.

After being elected to the Lok Sabha from Narasapuram Constituency, he rebelled against the ruling YSR Congress Party (YSRCP) and frequently made statements embarrassing the party leadership.

In the sedition case, the state government has implicated him along with two media channels for having facilitated Raju’s derogatory references to the caste and community of the Chief Minister. The videos that went viral show that the camera was kept open to show the MP’s expression, which cannot be considered decent.

Within days, the Andhra government and the MP have knocked on all doors such as the magistrate court, the High Court, and the Supreme Court even as the media continue to telecast stories about it.

Rejecting the objections of the AP government and the police, the Supreme Court directed medical tests beyond the state for the MP at Military Hospital in Secunderabad of Telangana. The medical report was given in a ‘sealed cover,’ but was discovered and publicised by the pro-government media. The contentions of the police and medical administrative machinery of the Jaganmohan Reddy government were neither believed nor accepted.

The SC asked the Telangana High Court to appoint a judicial officer to supervise the MP’s entire medical examination process and that the same should be videorecorded and submitted to the Supreme Court in a sealed cover.

He was directed to undergo medical tests in judicial custody, and his bail petition was adjourned to May 21. Raghurama Raju’s MP status did not help him to build enough strength to secure immediate release.

Registering an FIR without a complaint and the alleged use third-degree methods against the MP are very serious challenges the AP investigators are facing now. Raghu Rama Krishnam Raju and two TV Channels were slapped with sedition cases, surprisingly without any complaint.

The episode reflects hate politics, abuse of rights and authority on both the sides. If what is said by MP and shown unedited by media houses and placed on YouTube is ‘freedom of expression’, it will be, then, a sad demise of ethics and professionalism. Two or three abusive video talks of the rebel MP in the last week appear to be immediate provocation for the ruling party to resort to the stringent sections of law against him

Raju’s wife Rama Devi alleges that he was implicated in false cases so as to pressure him to withdraw from the criminal cases the Chief Minister is facing. She alleged third-degree physical torture in police custody. She also expressed in a video statement an apprehension of an attack on him by elements from Kadapa who were allegedly sent into Guntur jail where the MP has been detained. The SC directed that he be detained in the Military Hospital in Secunderabad.

A magistrate ordered medical tests at Government Hospital and in a private (Ramesh) Hospital, as both parties expressed doubts of bias. The AP HC bench questioned how the MP could be taken to jail without medical tests as ordered by the magistrate. The HC bench met on Sunday midnight to hold a hearing. The medical board’s report on MP’s injuries was submitted after 4 pm on Sunday in a so-called ‘sealed’ cover, but its contents were discussed in media.

Perhaps in the first such case in independent India, there is no formal complaint against the ruling party’s revolting MP from any quarter. The MP reportedly told the CBI special court judge that police had wrapped a hot iron wire around his legs and beat him up, demanding him to withdraw the bail petition.

In column number 7, where details of known/suspected/unknown/accused are sought, three entries are given: Shri Raghurama Krishnam Raju, MP, Media Houses; TV5 TV channel, ABN TV channel and others. These are supposed to be ‘full details”.

In column 12, where the complaint should be attached, it says that after inquiry ADG, CID directed to constitute an FIR on an enquiry report and contents are summarized. It also talks about hate speeches of the MP on various channels and alleges that he made every attempt at contempt and disaffection towards the government through his words and visual gestures of face and hands to provoke his followers to take to violence.

In the second paragraph, the FIR alleges targeting of the Reddy and Christian communities in a bid to stoke hatred by portraying that the government is favouring the two and that he was causing public disharmony.

Two media channels were implicated on the charges that they organized slots. It was also alleged that all the MPs’ speeches looked like a well-orchestrated conspiracy to create disaffection and bring contempt against the government.

It is not known from where the CID inquiry originated. A new situation arose where an FIR was filed suo motu by the police against the MP without a complaint! Apart from charge of sedition under Section 124 A, the police invoked 153A, promoting enmity between communities, and Section 505 IPC (b) which criminalises circulation of rumours with an intention to incite violence. The photos of the injuries to the legs of the MP are in circulation among social media channels and were presented to the High Court bench also.

Explaining the background, MP Raju’s advocate Mukul Rohatgi argued before the Supreme Court on 17th May. “I don’t want to cast aspersions, but am only pointing to the extraordinary nature of this case. I applied for cancellation of the bail of the Chief Minister. He is an accused in 35 cases by the CBI and the ED. It is listed on May 17. I am telling you this matter has huge overtones. I wanted to read out the FIR to tell you that this is a bogus case. Therefore, it is my respectful submission that he should be examined other than in Andhra,” Raju’s advocate argued. The Supreme Court granted his prayer.

Mukul Rohatgi reportedly articulated some more aspects in support of his contention: “He has been critical of the chief minister for some time now. That is a matter of open record. Last year, he got security officially from the Central government through the Delhi High Court because of threats by various elements in the party itself. That is the background,” Rohatgi said.

“What happens is this: it appears that the police authorities ordered some kind of an inquiry. Obviously, I take it that it is an inquiry in which my client is not associated. That inquiry resulted in a report to the CID branch of the police that this petitioner has made these kinds of critical remarks about the government, critical of the chief minister, trying to say that the chief minister is partial to one community”.

He pointed out that there is no allegation that his client ever “incited a rebellion or a call to arms or violence”, which is “the requirement of Section 124A (sedition) law.

“The cat is now out of the bag because my client is on TV making critical comments against the government about the COVID situation. Two TV channels and their reporters have also been booked. On May 14, which was incidentally the birthday of the petitioner, he was at his house in Hyderabad. He was picked up by a posse of 40 policemen, taken into a car and taken to Guntur which is 300 km away. They chose to register the FIR at Guntur!”

Rohatgi made another exposition: “This Board also says no injuries. A magistrate records that there are injuries. “What is important is that the medical board is headed by a gynaecologist whose husband is the head of the legal cell of the ruling party!”

Rohatgi argued that it could be best that AIIMS, New Delhi examined the petitioner. “In regard to a private hospital, somebody may have something or the other. The Magistrate said Ramesh Hospital, but the state is opposing it. So far as AIIMS in Mangalagiri in Andhra Pradesh is concerned, we have our own apprehensions because the governing body of AIIMS in Andhra Pradesh has on its board two prominent sitting MPs who were adverse to the petitioner.”

PIL in apex court to stop cutting of 2.5 lakh trees for diamonds