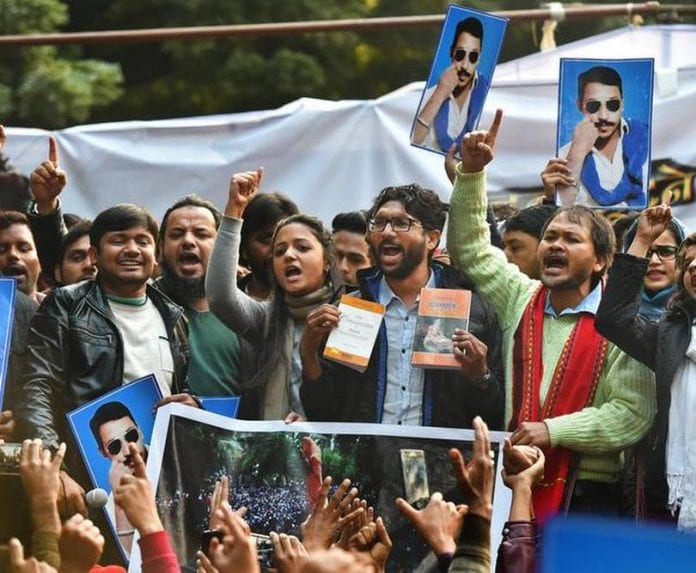 Akhil Gogoi is not a terrorist. The organization he was associated with was not a banned one. His activity was not violent and he made it a point to repeat the appeal to observe protests in a peaceful manner and never resorted to violence. Yet he is charged as a terrorist, is alleged to have committed sedition, promoted communal violence, and conspired with three others to threaten economic security of the nation. The Indian Penal Code, Unlawful Activities (Prevention) Act was liberally used against him to keep him behind bars since December 2019 for more than 18 months.

Akhil Gogoi contested the polls from prison and won the Sibsagar constituency in the recent Assembly elections. The National Investigation Agency court found nothing prima facie to justify charging Gogoi and his three colleagues under draconian laws. On July 1, 2021 he was discharged.

His is not an acquittal, but a discharge from a baseless charge-sheet and foreclosure of the prosecution. He is an activist and protestor who questioned the unconstitutionality of the Citizenship Amendment Act.

What is a terrorist act?

Section 15 of the UAPA defines it: “Whoever does any act with intent to threaten or likely to threaten the unity, integrity, security (economic security) or sovereignty of India or with intent to strike terror or likely to strike terror in the people or any section of the people in India or in any foreign country (a) by using bombs etc to cause (i) death of ii) loss of (iii) disruption of (iv) damage to (b) overawe public functionary detains, kidnaps or abducts a person to compel the government to do or abstain from doing an act, commits a terrorist act.

Thus to constitute a terrorist act within the meaning of Section 15, the prescribed illegal activities have to be done with any or more of the stipulated intention(s) such as threatening the unity, integrity, security, economic security of India or threatening the sovereignty of India or striking terror in the people or a section of the people.

(2) A person, who commits the offence relating to support given to a terrorist organisation under sub-section (1) shall be punishable with imprisonment for a term not exceeding ten years, or with fine, or both.

Limits of terrorism and its components explained by the Supreme Court in Hitendra Vishnu Thakur v. State of Maharashtra (1994) 4 SCC 602, paragraph 1542:

“Terrorism means use of violence when its most important result is not merely the physical and mental damage to the victim but the prolonged physiological (sic psychological) effect it produces or has the potentiality of producing on the society as a whole. Terrorism is generally an attempt to acquire or maintain power or control by intimidation and causing fear and helplessness in the minds of people at large or any section thereof and it is a totally abnormal phenomenon. Terrorism is distinguishable from other forms of violence as in the former the deliberate and systematic use of coercive intimidation is used.”

Unless the organization which the ‘accused’ supported is not a terrorist organization or a banned one, he cannot be charged as supporter of terrorism.

Also read: When state strikes: How UAPA locks one up with almost nil chance for bail

The police alleged that Akhil Gogoi had secretly formed an organization, the Krishak Mukti Sangram Samiti (KMSS) to support the Revolutionary Communist Centre and the latter was merged with the banned CPI (Maoist). The police also alleged that he conspired with three other accused to incite hatred and disaffection towards the government established by law, using the passage of the Citizenship Amendment Bill (CAB) as a pretext, they also promoted enmity among different groups of people.

The defence presented evidence of speeches that show, in fact, appealing not to resort to violence. The books which were seized by the NIA were not banned. Akhil also suggested not indulging in any Maoist activity in Assam. The defence counsel pointed out that the CPI (Maoist) has been declared a banned terrorist organization only from June 22, 2009. An overt act is essential for an offence under section 15 of the UAPA and that the same also has to be done so with the alleged intentions. One cannot say that that a protest, bandh etc. would not be taken as compromising the economic security of India.

The judge was totally convinced that the ingredients of Sections 18/39 of UAPA did not exist; that the three accused being associates of Akhil is not an offence as he was not a declared terrorist; that no independent action is attributed to the three with regard to conspiracy.

An interesting inference from the prosecution story is that Akhil Gogoi has conspired with himself! The judge brought out a judgment of the Supreme Court that a single person cannot be charged as a conspirator.

The judge found that the prosecution witnesses have not made any reference to the three accused persons. Witness No. 15 was not asked about any connection with Maoists. The statements of witnesses have no adverse materials against the accused. One witness also alleged that Akhil extorted money for terror activities. The judge noted that such a witness could not give a date or place where he might have extorted or attempted to do so.

The next allegation was that he was provoking violence through speeches. Akhil’s speech records were examined, but nowhere was any provocation noted. Some books were seized, but keeping such books is not an offence. Without active violence, people protesting should not invite criminal liability. The activities cannot be said to be done with the intention to threaten the economic security of India.

It is the duty of every judge at the district or metropolitan level to examine the strength of the charges based on evidence produced by the investigators. In the Sajjan Kumar v. CBI, (2010) in the Supreme Court, the judge while considering the question of framing the charges has the undoubted power to sift and weigh the evidence for the limited purpose of finding out whether or not a prima facie case against the accused has been made out. The court cannot act merely as a post office or a mouthpiece of the prosecution, but has to consider the broad probabilities of the case, the total effect of the evidence and the documents produced before the court and basic infirmities. In the P. Vijayan v. State of Kerala, (2010) in the Supreme Court, it has been held that Section 227 in the new Code confers special power on the judge to discharge an accused at the threshold if upon consideration of the records and documents, he finds that “there is not sufficient ground” for proceeding against the accused.

After considering all material, documents, witness statements, and speech records, the judge said there is no material whatsoever to frame even a prima facie charge against Gogoi.

The Guwahati NIA court judge Pranjal Das said it had found the conduct and approach of the investigating authority/prosecution in Akhil Gogoi case to be discouraging. The court hoped that high standards will be upheld in such cases for the sake of the country, and that this case will only be an exception.

Akhil Gogoi and his three friends lost precious freedom for more than 18 months without any remedy. The principle that no right should go without a remedy is breached repeatedly. It is rightly said that an independent judiciary is the only savior of freedom of expression.