India’s economy is slowing down and in the near term, there appears to be little hope of revival as domestic as well as external demand falter. The slowdown became evident in the second half of the last fiscal – between October 2018 and March 2019 – but has since progressed, worsening with each passing quarter.

GDP slumps, but is the government doing enough?

Official data pegged GDP growth to a 20-quarter low, at just 5.8 per cent, in the March quarter this year and now, brokerage firm Nomura has pegged the June quarter GDP growth at 5.7 per cent. For the full year 2018-19, GDP growth fell to 6.8 per cent from 7.2 per cent in the previous fiscal. And Moody’s Corporation has said that economic growth in India over the next 12 to 18 months will remain “weaker than in prior years”. The International Monetary Fund has also lowered GDP growth forecast for 2019-20– it was 7.3 per cent in April, but has been revised down to 7 per cent.

The question that arises after analyzing the data is: Is the government doing enough to battle the widespread slowdown in the economy? After remaining quiet for months, some top India Inc captains are now stating that the government has not been doing enough to spur growth. “The government may or may not be saying this, but there are clear-cut markings from the International Monetary Fund (IMF) and World Bank, which show a decrease in growth in the last three to four years,” an Economic Times report quoted Bajat Auto’s chairman Rahul Bajaj as telling shareholders at the company’s annual general meeting recently. “Like any government, they would like to show a happy face, but the reality is a reality,” he said. 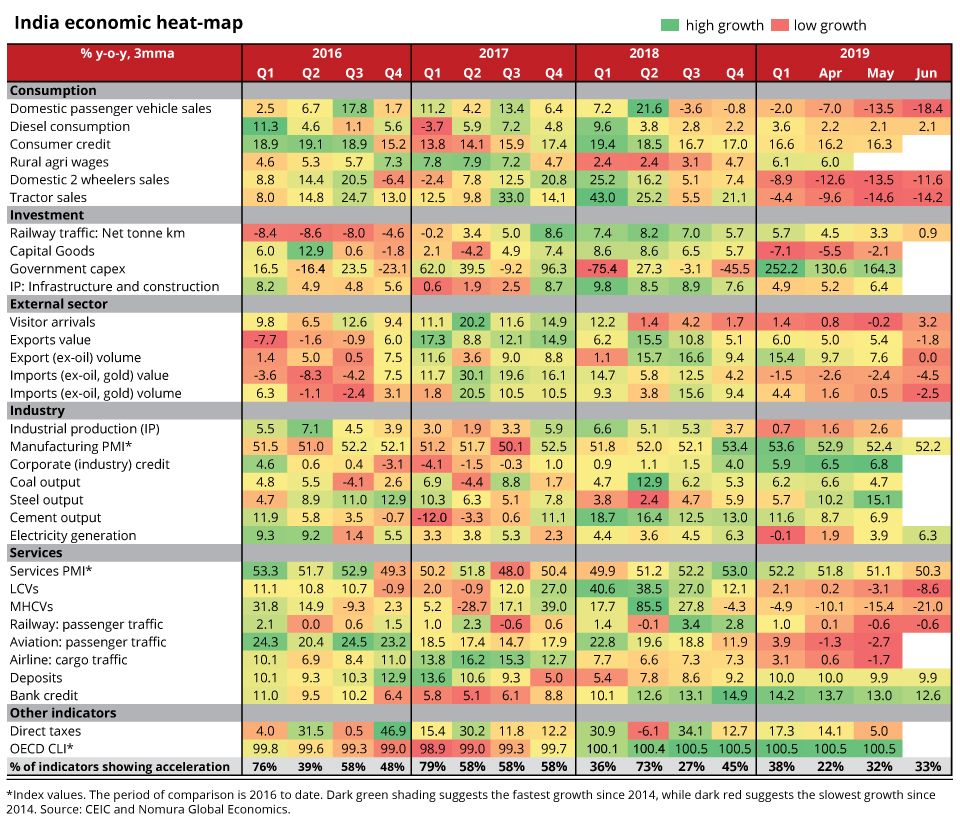 But in an interview to the Indian Express over the weekend, Finance Minister Nirmala Sitharaman said that the government wants to ensure that consumption is encouraged.

She said the government is putting money in the hands of people through DBT (direct benefit transfer) schemes. Secondly, to pump up consumption, public spending is being pushed, which is likely to benefit core industries.

Sitharaman expects a ripple effect on labour, everywhere rather than being concentrated in one place. “The virtuous cycle kicks in from there. Consumption increases, demand increases, investment increases, as a natural course,” she said.

The drawbacks of rate cuts

Analysts at Kotak Institutional Equities in a recent report have noted that world over, respective central banks, and not governments, are making the necessary moves to spur economic growth. And the same appears to be true in the case of India, where the RBI has already announced three back-to-back rate cuts while the government sticks to its narrative that India will continue to grow at 7 per cent this fiscal too.

“The recent resurgence in global stock markets has largely been led by (1) growing conviction in rate cuts by the US Fed and (2) increasing nonchalance about economic and earnings growth. The RBI is also playing its part with (1) large OMO bond purchases and (2) 75 bps rate cuts CYTD19, which have resulted in a sharp fall in bond yields. Governments have contributed little to revive economic growth. If anything, their economic deeds and policies have been quite incomprehensible, but markets have so far ignored the negative implications of their fiscal, investment and trade policies,” the report stated.

How stressed the Indian economy really is can be gauged from falling sales of key products and services since 2014, when the NDA government first came to power. An analysis by Nomura shows that domestic passenger vehicle sales were down 2.1 per cent in three months till June but in June alone, they fell by almost a fifth. In Q1, domestic two-wheeler sales were down by 9 per cent, tractor sales fell by about 4.5 per cent. In May and June each, tractor sales were down by over 14 per cent. Industrial production remained flat with a 0.7 per cent growth in the quarter. Passenger traffic growth in the railways was flat at 1 per cent while for airlines, passenger growth has come down significantly from high double digits to under 4 per cent in the June quarter. Sale of heavy trucks and buses was also down by about 5 per cent.

Analysts from Nomura in a report on growth inflection, stated that the June quarter remained tough for consumption indicators. “On the urban side, passenger car sales contracted sharply and diesel consumption growth remained low. Rural indicators such as two-wheeler and tractor sales growth fell sharply. Data on investment demand available until May suggested a broader moderation, though not as acute as the consumption sector. Public capex continues to rise sharply on a y-o-y basis, but this seems largely base-effect driven … external indicators point to weakening of domestic and external demand, demonstrated by the slump in the latest data for core exports (non-oil) and core imports (non-oil, gold),” the report stated.

But brokerage Edelweiss has forecast the start of the growth trajectory from the second half of the current fiscal, saying better-than-expected monsoon in H2 (October to March) should help demand acceleration. “That said, we estimate Q1FY20 (April-June 2019) volume growth to remain soft due to high base of Q1FY19, rural growth decelerating further from 1.15x Urban to 1x Urban and positive effects of government initiatives (from June) taking time to reflect in (consumer staples) volume growth.”

Meanwhile, the Kotak analysts note that two of the drivers of the economy – high growth in private (household) consumption led by declining household savings rate and high growth in government spending led by high consolidated fiscal deficits – may be running out of steam. “We do not expect any imminent revival in private investment. The FY2020 Union Budget did not provide any stimulus. Also, the NBFC ‘liquidity’ and ‘solvency’ issues could persist and even percolate into other parts of the financial system given the deep connection between the real estate developers, HFCs, banks and bond markets,” the report by Kotak Institutional Equities said.

The bottomline is that the economy is unlikely to revive in the next few months and more pain may be on its way.