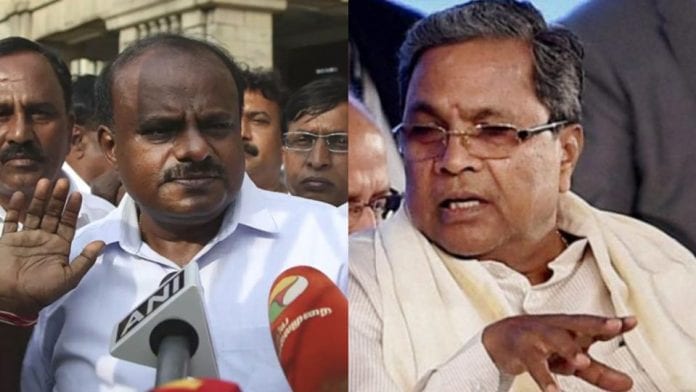 Whether they like it or not, the Congress and the Janata Dal (Secular) in Karnataka have to combine for the forthcoming Assembly by-elections if they are serious about challenging the ruling Bharatiya Janata Party (BJP) in the state.

But, predictably,  the two parties which were coalition partners in the previous government are squabbling and nowhere near outlining their moves to fight the BJP. With elections on October 21, the final word is not yet out on whether they are going it separately or as an alliance.

On July 23, the HD Kumaraswamy government fell after 17 coalition legislators deserted their parties in a move engineered by the BJP. On July 26, BS Yediyurappa of the BJP assumed power. The 17 legislators were disqualified and hence the by-elections in all except two which are under a legal challenge.

The by-elections are crucial as it will determine whether the BJP will cross the half-way mark of 112 in a house of 224. After the disqualification of the 17 legislators, the strength of the house is down to 207. The BJP which has 105 legislators needs at least eight more to get majority. The coalition which together has 100 needs 13 wins. Two are independents and  have in the past flitted from one party to another at will.

The reason why the JD(S) and the Congress need to be together is because individually neither has the numbers to form the government.  In fact,  during the May 2018 Assembly elections,  the Congress with 80 seats and the JD(S) with 38 seats were able to form government only because they combined. The BJP, with 104, fell short by nine seats.

Instead of clearly chalking out a plan that would include unseating the ruling BJP,  top leaders of the coalition and former chief ministers HD Kumaraswamy and Siddaramaiah have been engaged in a verbal battle blaming each other for the fall of the coalition government.

JD(S) supremo HD Deve Gowda who first said that the decision to have a coalition would be taken by Congress interim president Sonia Gandhi has changed his view and the latest is he is for contesting the elections independently.

The Congress has so far not responded formally to the JD(S) views on the subject. It has been caught up in a difficult situation as the party’s chief organiser, election strategist and tough politician DK Shivakumar is cooling his heels in Delhi’s Tihar jail on charges of money laundering. In other words, he has effectively been neutralised.

Already suffering serious disadvantages, the coalition partners were expected to carry on with the alliance until the next Assembly elections in 2023.

The irony is that 12 of the 15 constituencies that go for elections on October 21 were Congress-held while three had been won by the JD(S). Assuming that the parties manage to win all these seats, they will still be able to form government only in a coalition.

On the other hand, if the two fight independently the chances are that it will prove to be advantageous to the BJP as the votes may get divided between the JD(S) and the Congress.

According to reports,  the coalition think-tank is unsure if fighting as an alliance will work considering that they performed disastrously in the 2019 May Lok Sabha elections.  In their worst-ever performance, the Congress and the JD(S) managed to get just one seat each of the total 28. The remaining 26 went to the BJP including one going to an independent backed by the BJP.

But, Assembly and Lok Sabha elections are different from each other. In the May 2019 elections, it eventually turned out that Prime Minister Narendra Modi was the only issue and elections in most parts of the country including in Karnataka were fought over him. As Yediyurappa conceded during electioneering, voters did not even bother to check who their local candidate was – as their attention was only on the prime minister.

In the Assembly elections, this will not be the case as voters have historically proved they differentiate between state-level polls and for the Lok Sabha.

For the Congress-JD(S) combine,  therefore the October 21 polls provides a great opportunity to make a point about the questionable manner in which their government was unseated by the BJP. Contesting separately,  they could still do well but the chances seem that much more remote. They could even end up giving the BJP and Yediyurappa a walk over by feuding incessantly and losing sight of the larger picture.

Prashant slams Nitish, asks which side are you on – Godse or G...