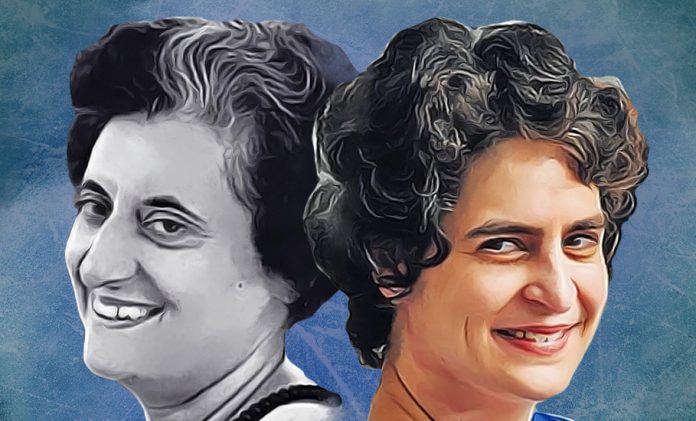 History replaying itself: Priyanka’s detention at Hargaon on the 44th anniversary of her grandmother’s arrest by the Janata Party on October 3, 1977 has once again made the Congress believe it is a prophetic sign

The detention of Congress general secretary Priyanka Gandhi Vadra by the Uttar Pradesh police in the wee hours of Monday (October 4) has angered and energised her party members in equal measure.

Priyanka was detained by the UP Police at 5.30 am in Hargaon village, while she was on her way to Lakhimpur Kheri to express solidarity with the kin of farmers who were mowed down by the convoy of Ashish Mishra, son of Union minister of state (home affairs) Ajay Mishra, on Sunday. Her detention was preceded by Priyanka’s heated arguments with the police; she dared them to show orders that prohibited her from meeting family members of the slain farmers and said that sans such orders she would accuse them of kidnapping her.

To many Congress members and sympathisers Priyanka’s bellicose challenge to the BJP and her detention by Yogi Adityanath’s police has given the nostalgic gratification of drawing, yet again, parallels with her grandmother, the late Indira Gandhi’s combative politics.

Within hours of her being detained Congress workers pointed to a remarkable coincidence; a marker of destiny, if you will. It was 44 years ago, on October 3, 1977, the CBI had arrested Indira Gandhi in full glare of the public outside her 12, Willingdon Crescent residence in New Delhi on corruption charges, barely seven months after the Congress party lost the Lok Sabha polls, and she her Rae Bareli seat, in wake of the seething public anger against her imposition of the Emergency.

Indira’s arrest, orchestrated by the newly elected Janata Party government of Morarji Desai and under direct instructions from the then Union home minister Chaudhary Charan Singh, was arguably the moment that put the Congress back on an electoral revival path.

Of course, Indira’s resoluteness of will to bounce back had been seen just two months earlier when, in August, she had decided to visit Belchi, a small hamlet in Bihar’s Patna district. Trudging through sludge atop an elephant, Indira had made the four-hour journey to reach Belchi where eight Dalits and three others from deprived communities had been killed a few weeks earlier by upper caste landlords.

Also read: Did Prashant Kishore’s dalliance with Cong fizzle out before it could begin?

Ever since, the Belchi analogy has been invoked countless times for successive members of the Gandhi family – Rajiv, Sonia, Rahul and Priyanka – whenever the chips were down for their party and they showed signs of renascent appetite for political comebacks.

Now, Priyanka’s detention on the 44th ‘anniversary’ of her grandmother’s arrest has given the Congress an anglicised Willingdon analogy to compliment the rustic and colloquial Belchi. How prophetic these analogies would ultimately be, rests entirely on Priyanka’s future political course.

Unfortunately, for the currently euphoric Congress cadre, the balance of probabilities doesn’t look encouraging. Dispassionately analyse the track record of Priyanka’s politics – much like that of her brother, Rahul – ever since she was given charge of Uttar Pradesh in early 2019, it is littered with instances of her fiercely fighting for the right causes, only to then disappear from the scene.

Priyanka will be the face of the Congress’s campaign when the state goes to polls in February-March next year. The Congress has steadily lost political ground in the state over the last three decades. In the 403-member UP assembly, the Congress has just half a dozen MLAs and of the 80 Lok Sabha MPs elected from the state, the party’s tally stands at a pitiable one – interim Congress chief Sonia Gandhi from Rae Bareli.

In the over three years that Priyanka has now been the party in-charge for UP, there has been no visible improvement in the Congress’s poll prospects. Assembly bypolls and local body elections have shown no significant uptick in the party’s fortunes. The attrition of its leaders – be it prominent faces like Jitin Prasada, Annu Tandon or scores of former MLAs and local leaders like Lalitesh Pati Tripathi – to the BJP or other outfits has continued.

Priyanka’s task is an onerous one but the Lakhimpur Kheri tragedy isn’t the only instance in which the BJP has practically handed her an issue for political jousting. Congress members hastily rushing in to claim that Priyanka’s detention will do for the Congress in UP what Indira’s arrest had done for the party nationally in 1977, are in definite need of a reality check.

Priyanka’s current belligerence isn’t unprecedented. It had been on full display just a year ago when she, along with Rahul Gandhi and hundreds of party workers, was stopped by the UP police on the Greater Noida Expressway while trying to go to Hathras to meet the family of a 19-year-old Dalit girl who had been gang-raped by upper caste men.

Images of Rahul being shoved to the ground by the police, Congress workers being beaten up and Priyanka valiantly intervening to stop the cops from raining their lathis down on them, had made front page headlines and hogged television prime time.

A few days later, it was business as usual – Priyanka was back in Delhi and her party continued on its rudderless journey in UP. Combative state Congress chief and MLA Ajay Kumar ‘Lallu’ regularly organised protest marches and sit-ins but most party members would give them a miss with no fear of reprimand by Priyanka.

During the first wave of the COVID pandemic, Priyanka had locked horns with the Adityanath administration on the issue of bringing back people of UP who were stranded in other states. The confrontation went on for several days and Priyanka posted one angry video after another on her social media platforms lashing out at Adityanath. As the first wave ended, so did Priyanka’s daily potshots at the chief minister.

Next, Priyanka picked up the issue of women’s safety in UP when the conviction of then BJP MLA from Bangarmau, Kuldeep Sengar, necessitated an assembly bypoll in November 2020. The Congress fielded Aarti Bajpai, the only woman candidate in the fray among all key political parties, to amplify its campaign for women safety and declared that the Gandhi siblings would be star campaigners for the Bangarmau bypoll.

At that time, another analogy from the Indira-era was cited. Indira had campaigned for Mohsina Kidwai in the 1977 Azamgarh parliamentary by-election and declared that a victory for Kidwai would revitalise the party cadre across the state after the Lok Sabha rout – Kidwai won eventually.

The only other time that a member of the Gandhi family has campaigned in a bypoll was when Rahul went to Firozabad to canvass for Raj Babbar in the 2009 parliamentary by-election. The actor-turned-politician, now a member of G-23, defeated Akhilesh Yadav’s wife Dimple Yadav. Alas, despite the hype, when the Bangarmau assembly bypoll happened, Priyanka failed to turn up to canvass for Bajpai, who finished second.

In July 2019, Priyanka was detained on her way to Sonbhadra to meet families of those killed in a brutal caste violence. ‘Belchi moment’, her party colleagues chorused, only to be disappointed within days.

Priyanka disappeared from the scene, leaving Lallu to do the groundwork. She then returned with great ferocity in December, when the state government and police cracked down ruthlessly on anti-CAA activists. This time Priyanka traversed the streets of Lucknow as hapless cops tried to stop her from meeting the activists who had been beaten severely by the police in custody. The COVID-19 pandemic in early 2020 disrupted the anti-CAA protests and Priyanka too went silent on the subject.

What Priyanka or her cheerleaders in the Congress forget when drawing analogies from the Indira-era is that the political landscape of India today is vastly different from what it was in the 1970s.

Yes, the Congress had lost the 1977 general election and Indira lost her own seat but the party was still a formidable force. Indira’s adversaries, though brought together by their shared experiences of the excesses of the Emergency and mutually beneficial interests in deposing her and the Congress, were a motley group of leaders with diverse ideological persuasions who were at each other’s throats practically every time a political or administrative decision had to be made.

The Janata Alliance was a combustible caucus and it blew up within three years, bringing Indira and the Congress back to power.

The BJP today – whether Modi’s nationally or Yogi’s in UP – is a political beast with an insatiable appetite for electoral wins. It cares not for political courtesies, brooks no dissent from within its ranks or its political rivals and has no compunction in using every available means, kosher or not, to stay its course of electoral dominance.

It has a deeply committed grassroots organisation and a voter base that clearly has no problems with the party’s deeply divisive and communal politics. The BJP’s monetary resources, thanks to industrialists and opaque electoral bonds, make its political rivals look like paupers.

The Congress party, on the other hand, has practically none of these facets, particularly in UP. Priyanka’s transient political outings in UP have already cost her and the Congress nearly three precious years which could have been effectively utilised to revive the party. Several moments touted as Priyanka’s Belchi have come and gone without any positive consequences.

Will her Willingdon moment go down the same route? There are indications that Priyanka will, at least till the UP polls, spend most of her time in UP, keeping Lucknow as her base. The Kaul House – residence of the late Sheila Kaul, Pandit Jawaharlal Nehru’s sister-in-law – on Lucknow’s Gokhale Marg has finally been done up as per her liking. She is expected to launch her party’s campaign from Varanasi on October 9 and ambitious plans of state-wide yatras, voter outreach and enrollment of Congress members have been drawn up.

There is still no clear indication on whether Priyanka will also contest the assembly polls, though rumours of such an eventuality have begun to gain momentum in Lucknow. If Priyanka does agree to contest the polls and not chicken out after allowing such rumours to grow – as she did during the 2019 Lok Sabha polls when it was wildly rumoured that she may take on Narendra Modi in Varanasi – it would show her serious intent to make things right by her party in UP.

Once the dust kicked up by the political storm in Lakhimpur Kheri settles down and Priyanka walks out of the PAC guest house in Sitapur, where she has been locked up by the police, will we continue to see her pugnacious politics or will she take another vivifying break in the comfortable confines of her home near Shimla?

Priyanka can make her detention in Hargaon a case of history truly repeating itself by replicating her grandmother’s massive and sustained public outreach since the Willingdon arrest. Or, she could commit a historic blunder by turning the incident into another case of opportunistic political tourism. Which will it be?