It is the stuff that sambar and rasam are made of. In the Hindi belt it is cherished as peeli dal, eaten with or without tadka or seasoning. Pigeon pea or tur has a special niche in the Indian palate, but we do not produce enough of it. The annual production based on the average of five years, including one when the crop failed and prices spiked to a record high, was 3.76 million tonnes. On average the country imports about half a million tonnes a year.

Pigeon pea is a hardy plant. It needs little rain and is grown in areas that primarily depend on the sky for irrigation. Often it is planted between rows of cotton, jowar and groundnut. Farmers assign their worst land for it. They also don’t give it much care. The national yield per hectare for the crop, therefore, has stagnated at around 800 kg.

But, the crop’s yield can be improved through hybrid vigour. This is where a recent discovery made by Icrisat (International Crops Research Institute for the Semi-Arid Tropics), the Hyderabad-based international institute for research in crops like legumes and millets suited for the semi-arid tropics, might fit in. A team led by Rajeev Varshney has found that temperature plays a key role in regulating male sterility and male fertility in pigeon pea. Varshney is director of the institute’s Genetic Gains Research Project. 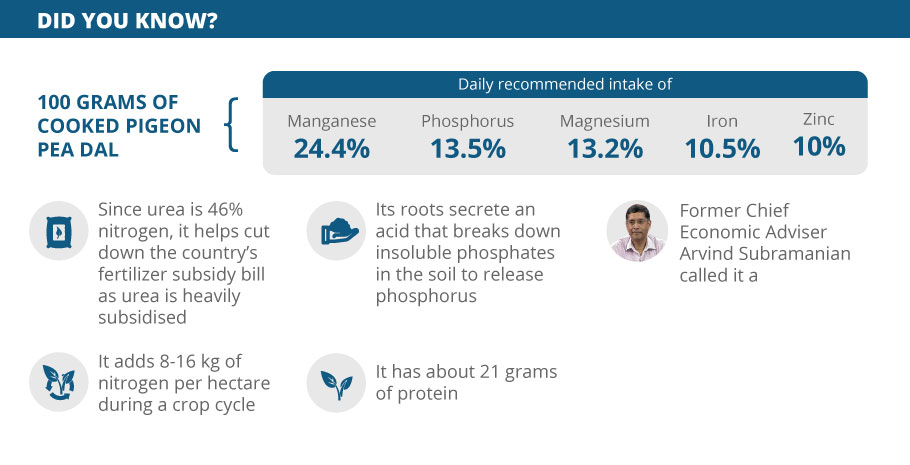 The team found that at or below 24 degrees Celsius, during certain stages of pollen development, a male sterile pigeon pea plant, that is one without viable pollen to fertilize an egg, becomes male fertile. Above that temperature, it reverts to male sterility. Another finding is that a plant growth hormone regulates this condition and when the hormone is applied externally, male sterility can be reversed.

Male sterile plants are required to cross-fertilise or develop hybrids in self-pollinating plants. This is how hybrid vigour has been introduced in pearl millet or bajra, sorghum or jowar as well as maize and mustard.  Pigeon pea is a hermaphrodite plant. The male and female reproductive organs are situated within a flower. But there is also a small window of out-crossing that happens when insect pollinators visit the flowers attracted by honey, pollen and scents, which are particularly strong in male fertile plants.

The quest for a male sterile line

Formal efforts at improving pigeon pea yield and resistance to pests and diseases began in India in 1931. Thirty-four years later, the Indian Council of Agricultural Research launched a crop improvement programme at many regional research centres. In 1974, Icrisat established a pigeon pea improvement programme based on conventional and hybrid breeding.

To create hybrids in pigeon pea we need a plant without viable pollen, so that its egg can be fertilized with the pollen of a plant with desirable traits. A plant without viable pollen is a male sterile line. Such lines happen in nature as a result of spontaneous mutation.  In 1974, Icrisat breeder Subba Rao set out to find them. He individually examined 7,000 pigeon pea plants with various traits in Icrisat’s collection but could not find any. He found one in a field in Andhra Pradesh.

For hybrid seed production, one needs many male sterile plants so that they can be crossed with plants with desirable traits. Since a male sterile line does not have viable pollen, it cannot make copies of itself. For that it has to be crossed with a line that is alike in all respects except that it is male fertile. The resulting progeny is crossed with another plant with yield enhancing or disease-resistant traits. It is a two-step process that requires three lines, known in jargon as a male sterile or A line, a male sterility maintainer or B line and a male fertility restorer or R line.

When A and B are crossed, all the offspring will not be male sterile. There will be a significant number of male fertile plants as well. Removing these is cumbersome in pigeon pea because its flowers tend not to open. So each flower has to be individually opened and examined. The flowering also does not happen at the same time. So the plots have to be visited more than once. They also have to be isolated so that they don’t get contaminated with undesirable pollen. And they must be in areas with large bee populations. The harvesting of the seed has to be done carefully so that male fertile and male sterile seeds do not get mixed.

This is done by mating certain wild relatives of pigeon pea with a cultivated variety. Gujarat Agricultural University released the first pigeon pea hybrid based on this system in 2004. Though it gave good results in trials, it could not be commercialized because of its inability to give good yields uniformly across locations and environments.

Breakthrough and birth of Pushkal

The big breakthrough happened in 2010, when Kulbhushan Saxena, a breeder at Icrisat released the world’s first commercial pigeon pea hybrid, ICPH 2671. In all India coordinated trials it gave 31 per cent more yield than the then best available variety, he says. More than 90 professional seed producers were roped in and about 10 companies came forward.  Pravardhan Seeds of Hyderabad marketed the hybrid seed as Pushkal.

The hybrid, ICPH 2671 was a “milestone” in pigeonpea breeding says Pranjivan Zaveri, former professor of Gujarat Agricultural University in Dantiwada, and founder of Farm Tech Biogene, an Ahmedabad-based seed company. A pulse crop breeder, he got a white pigeon pea hybrid registered in 2018.  Zaveri produced two lots of ICPH 2671 seeds for Icrisat.

Sadly, Icrisat discontinued the commercial pigeon pea programme after 2014 when Saxena retired from the organisation. There were complaints about seed quality owing to lax monitoring.

When male sterility is temperature regulated, hybrid seeds can be produced with just two lines. The B line is not needed as the A line transits from sterility to fertility with a change in temperature. This is where Icrisat’s latest discovery fits it. Hopefully, it will help revive the pigeon pea hybrid programme and its commercialisation.

An improvement in yield can reduce the price of pigeon pea and make it affordable to consumers who currently settle for a poor substitute – yellow pea dal imported from Australia and Canada.