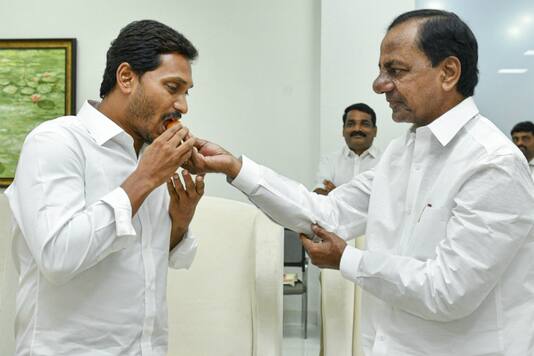 Not long ago, there was an air of optimism and hope as the sibling Telugu states of Andhra Pradesh and Telangana were preparing to shed their bitter baggage of the past and set a new template for cooperation.

The reason for this positive change was the blossoming friendship between AP’s new Chief Minister YS Jagan Mohan Reddy and his Telangana counterpart K Chandrasekhar Rao. The personal chemistry between the two leaders had become the toast of the local media and the air was thick with expectation that the new friendship would lead to resolution of the river water disputes between the two states, which seemed intractable till then.

However, the political bonhomie between Jagan and KCR is all but over now. Bitterness has replaced bonhomie. Cordiality has given way for confrontation.

The Telugu states are now bracing for a long fight over the Krishna river waters. A sense of perceived injustice in the water allocation, which was one of the key factors that fuelled the Telangana statehood movement years ago, has now resurfaced in the new state.

Andhra Pradesh’s move to construct a lift irrigation project on the Krishna river and upgrade a head regulator canal system on the foreshore of Srisailam reservoir has triggered a bitter dispute.

This marks the end of the political honeymoon between KCR and Jagan who had earlier vowed to sort out all pending inter-state issues in an amicable manner.

The recent virtual meeting of the Apex Council on inter-state water disputes, chaired by Union Water Resources Minister Gajendra Singh Shekhawat, saw some fireworks with both states accusing each other of constructing unauthorised projects on Krishna river.

Telangana, which is the upper riparian state, raised objections over Andhra Pradesh taking up Rayalaseema lift irrigation project on Krishna river. On its part, Andhra Pradesh voiced concerns over lifting of additional water from Kaleshwaram lift irrigation project constructed by Telangana on Godavari river in the second phase while the first phase itself had no approvals.

Though the two states agreed to the Centre’s proposal to refer the water sharing issues to a tribunal under the Inter-State River Water Dispute Act 1956, the video conference, convened by the central water resources ministry, was marked by rancour and bitterness.

Soon after the meeting, KCR threatened to construct a new project across the Krishna river on the foreshore of Srisailam reservoir if Andhra Pradesh goes ahead with the construction of Rayalaseema lift irrigation project on the river to draw an additional three tmc (thousand million cubic feet) of water.

“If Andhra Pradesh does not stop the Rayalaseema lift scheme, we too, will be compelled to construct a new barrage between Alampur-Pedda Marur in Jogulamba Gadwal district to lift three tmc of water from Krishna river,” he said.

Pointing out that during the combined Andhra Pradesh regime, great injustice was done to Telangana in river water sharing, he said, “Even after bifurcation, if Andhra Pradesh behaves irresponsibly and tries to loot Krishna waters according to its whims and fancies, we will not tolerate. We can go to any extent to protect the interests of our state.”

Jagan has his way

Jagan, who has been moving closer to the BJP leadership in the recent times, had his way at the Apex Council meeting, with the Centre agreeing to a majority of his demands.

KCR, on the other hand, opposed notifying the jurisdiction of KRMB, GRMB and bringing the common projects of on Krishna River like Srisailam and Nagarjuna Sagar under the jurisdiction of KRMB at this juncture, considering that the Brijesh Kumar Tribunal was yet to give its award finalising water sharing between the two lower riparian states.

Related news: The more, the merrier: Why districts in Telugu states are multiplying

Another key demand of KCR was that directions be immediately issued to Andhra Pradesh to stop Rayalaseema Lift Irrigation Scheme. This too was ignored.

“The Centre will go ahead with notifying the jurisdiction of both KRMB and GRMB. The Telangana chief minister has dissented on this, but as per the Andhra Pradesh Reorganisation Act, no consensus is needed and hence the Centre will notify it,” Shekhawat announced after the meeting.

The shifting of KRMB to Andhra Pradesh, which has been pending for years, and making KCR to agree for submitting DPRs of all projects were the key outcomes of the meeting.

The Apex Council, set up as per the terms of the Reorganization Act, 2014, is mandated to approve new projects planned by both the states on Godavari and Krishna rivers, supervise the functioning of the Godavari and Krishna Management Boards and to resolve any dispute arising out of sharing of river waters between the two states.

The bone of contention between the two states is an order issued by the Andhra Pradesh irrigation department, proposing to take up the Rayalaseema Lift Irrigation Scheme at an estimated cost of ₹7,045 crore.

The scheme intends to draw and utilise 3 tmc of water per day from Srisailam reservoir on the Krishna river. The Telangana government has described the order as illegal, unilateral and against the spirit of the Reorganisation Act.

However, Andhra government justified the move, stating that the new schemes were well within the state’s rights. It also accused Telangana of constructing projects like Palamuru-Ranga Reddy lift scheme which was in violation of the Krishna Water Dispute Tribunal award.s way to bitterness, why Telugu states are locked in water war