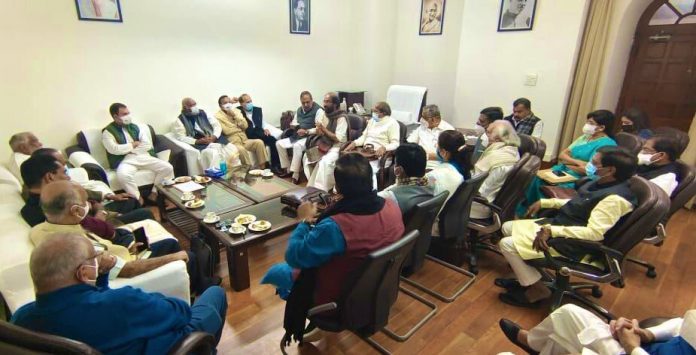 The first two days of Parliament’s winter session have shown that the Congress party’s efforts at a united Opposition onslaught against the Centre have been stymied by the Ekla Chalo stance of Mamata Banerjee’s Trinamool Congress (TMC). However, the Grand Old Party seems to have found a new entrant to its Opposition unity plan – Telangana Chief Minister K Chandrasekhar Rao’s (KCR) Telangana Rashtra Samiti (TRS).

And yet, while the Congress is happy at the return of an old ally, it is also cautious in pre-empting mid- or long-term realignment with the TRS. Congress insiders say the party has enough reasons to suspect the TRS’ current positioning but would, for the moment, be content with having within its united Opposition bloc, the southern ally with seven members in the Rajya Sabha and nine in the Lok Sabha.

Though part of the Opposition, the TRS has, so far, been viewed more as an outfit that chose to be friendly with the BJP whenever the ruling party found itself short of adequate legislative strength in the Rajya Sabha. Since 2014, the TRS has often chosen to vote alongside the BJP – or help it in the numbers game in the Rajya Sabha by well-timed walkouts/abstentions – whenever the Centre moved controversial Bills despite lacking a clear majority in the Upper House.

The party had also maintained a careful distance from the Congress, a past ally and under whose coalition regime Telangana was carved out of Andhra Pradesh as a separate State, and its efforts at projecting a united Opposition against the BJP.

However, the ongoing winter session is not only witnessing the TRS’ ready participation in joint Opposition meetings called by the Congress, but also its uncharacteristically aggressive protests against the BJP during Parliament proceedings. TRS parliamentary party leader K Keshav Rao has been regularly attending joint meetings of 15 Opposition parties convened by Rajya Sabha’s leader of Opposition, Mallikarjun Kharge, and former Congress president Rahul Gandhi.

Keshav Rao, a former Congressman who switched to the TRS during the Telangana statehood agitation, said his party is “definitely with the Opposition and will be part of every effort to expose the lies of the BJP government”.

Though Keshav Rao declined to comment on past incidents, when the TRS practically bailed the BJP out of difficult situations in the Rajya Sabha, claiming “we have only supported the government on those issues which were in national interest”, he waxed eloquent on the “misery” that policies of the Narendra Modi government have “unleashed on the country and the people of Telangana”.

Behind the changed stance

TRS sources said the party’s changed stance against the BJP is the result of the saffron party expanding aggressively in Telangana and emerging as KCR’s principal rival. “The BJP has been making inroads in the State; the result of the Huzurabad and Dubbak assembly bypolls or the Hyderabad municipal polls in the past year are a clear sign of this churn. After the creation of Telangana, we practically had no rival in the State – the Congress was decimated, the TDP was gone, the BJP was still a marginal player – and so, we could afford a calculated, issue-based alignment with the BJP at the Centre. Now things are different and we need to stay alert against the BJP,” said a TRS MP.

Four TRS MPs that The Federal spoke to confirmed, on condition of anonymity, that their party’s present antagonism against the BJP stemmed from the humiliating defeat it suffered in the recent Huzurabad assembly bypoll, where former TRS leader Etala Rajendar registered an impressive win on a BJP ticket. The TRS, said sources, had launched a massive election campaign in Huzurabad and spent enormous amounts of money to wrest the seat but failed to win.

“It would not be an exaggeration to say that the Huzurabad bypoll was the most expensive bypoll that the country has ever seen. We put in everything and yet we lost the seat to the BJP. Whether the victory was because of Etala Rajendar’s own standing or due to the BJP’s growing popularity is debatable but the fact is that our defeat has made us look weak and strengthened the perception that the BJP is now the main rival of the TRS. KCR can’t afford this; he has old ties with the Congress and so, even if the Congress is our rival in the State right now, we can work with it to keep the BJP out,” said another TRS MP.

The Congress wants to keep the TRS in good humour for now, said sources. The Grand Old Party is also aware that KCR’s ideological and political affiliations are rather elastic.

“We don’t know which side he will be on a month or a year later but for now, if his party wants to join our effort to fight the BJP in Parliament, why should we have a problem,” one of the Congress’ floor managers in Parliament told The Federal.

The leader, however, also pointed out that the Congress needs to ensure that in its enthusiasm to prove its current enmity with the BJP, the TRS doesn’t end up helping the Modi government during House proceedings.

“Today (November 29), it was basically the TRS MPs who gave the Speaker a chance to repeatedly adjourn Lok Sabha proceedings, even though other Opposition MPs had agreed to participate in discussions. The TRS MPs kept storming into the well of the House even when our members and those from other Opposition parties were seated. Eventually, we did walk out but that was after it became clear that the Centre was not willing to have any meaningful debate,” the Congress leader said.