As India completes a long period of lockdown because of COVID-19, The Federal revisits the biggest story of our times and tries to make sense of the surreal events that have unfolded around us since March. We look at how life has unfolded in a pandemic, what it has told us about ourselves, our country, society, religion and government, and what can we expect from a post-COVID world, if it exists. Today, we conclude the series by analyzing how it has upended politics, exposed the flaws in right-wing rhetoric, and thrown up new leaders who give us hope that the future might be different from the divisive and bigoted politics that shaped many countries before the pandemic. 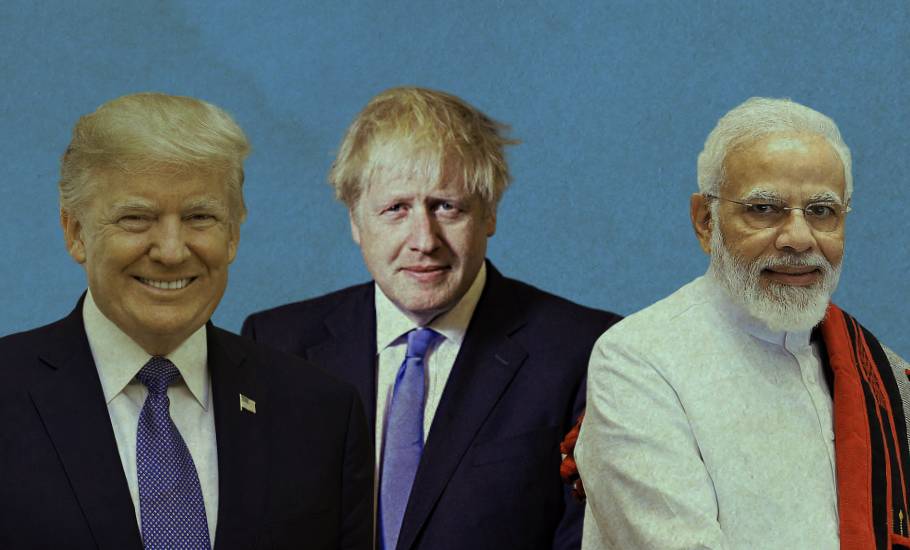 Globally the politicians who promised a “new world” now face challenges that they did not anticipate. Almost all aspects of their respective economies have received a major setback.

In many parts of the world right-wing politicians have been playing patriot games. Their underlying message is change, but unfortunately they have been harking into the past while promising a better future.

The US President Donald Trump promised to make “America great again”. Japan’s Shinzo Abe campaigned using the slogan “Take back Japan”. In Britain Boris Johnson used just three words “Get Brexit done” to win a landslide and in India, BJP has been talking of bringing back the nation’s “glorious past”.

The tactics so far have resonated brilliantly with a large section of voters world over. The rightward shift in politics cleverly tapped the frustrations of respective populations over the failure of incumbent political class to change things as they were.

Related News: In a pandemic, survival is the biggest achievement

India’s middle class tired of a lethargic, corrupt administration that moved the wheels of governance in a grinding pace voted Narendra Modi to power over his promise of “sabka saath sabka vikas” or development for all.

It’s a different matter that to win a second term he chose to push a strident form of Hindu nationalism and returned with an even bigger majority. The campaign inflamed tensions, upsetting the minorities, especially the Muslims.

As global leaders grew in size and stature amid non-stop drumbeats fuelled by an intrusive, predatory, all pervasive, social media, the COVID struck. It’s a different world now — ravaged and bruised in many ways none of these leaders ever imagined.

Related News: Tyranny of a pandemic: When time stops, and you count just blessings

America is inching towards almost one lakh deaths, India, while trying to flatten the curve, is realising that it has unwittingly ended up knocking its economy out of shape. The global poverty figures are likely to go out of spin and nobody knows when this ordeal would come to an end.

The scientists all over the world are scrambling to find an antidote, they are trying to make a vaccine but not clear when would that be ready and how effective it would be? The economists are unaware as they do not know when they can predict an economic recovery. All they could tell us at this juncture is that the demand is dead.

The political class in most countries is clueless and bumbling along. The initial bravado of Trump is now reduced to name calling. He is blaming China for its inability to contain the disease within its borders. Trump’s initial reaction was that, “It’s one person coming in from China and we have it under control. It’s going to be just fine.”

Related News: OMG! Covid-19 may trigger a crisis of faith in organised religion

Johnson was equally dismissive. “We will take it on our chin”, he said initially only to announce a few days later that he himself was hit by the disease and was in self- quarantine.

In India Prime Minister Narendra Modi made four dramatic television appearances. The first two speeches had an impact as 130 crore people heeded to his call and remained indoors to observe an unprecedented lockdown. But as weeks rolled by and the lockdowns were extended poor migrant labourers, working in various parts of India, began to walk to their home towns as the fear of death by hunger overshadowed death by virus.

Globally the politicians who promised a “new world” now face challenges that they did not anticipate. Almost all aspects of their respective economies have received a major setback. India, which planned to eliminate the remaining 25 per cent of its poverty in the next decade or so, is now in the reverse gear. Millions of small town families that managed to improve their economic well being in the last few decades or so may now find themselves slipping back into poverty. 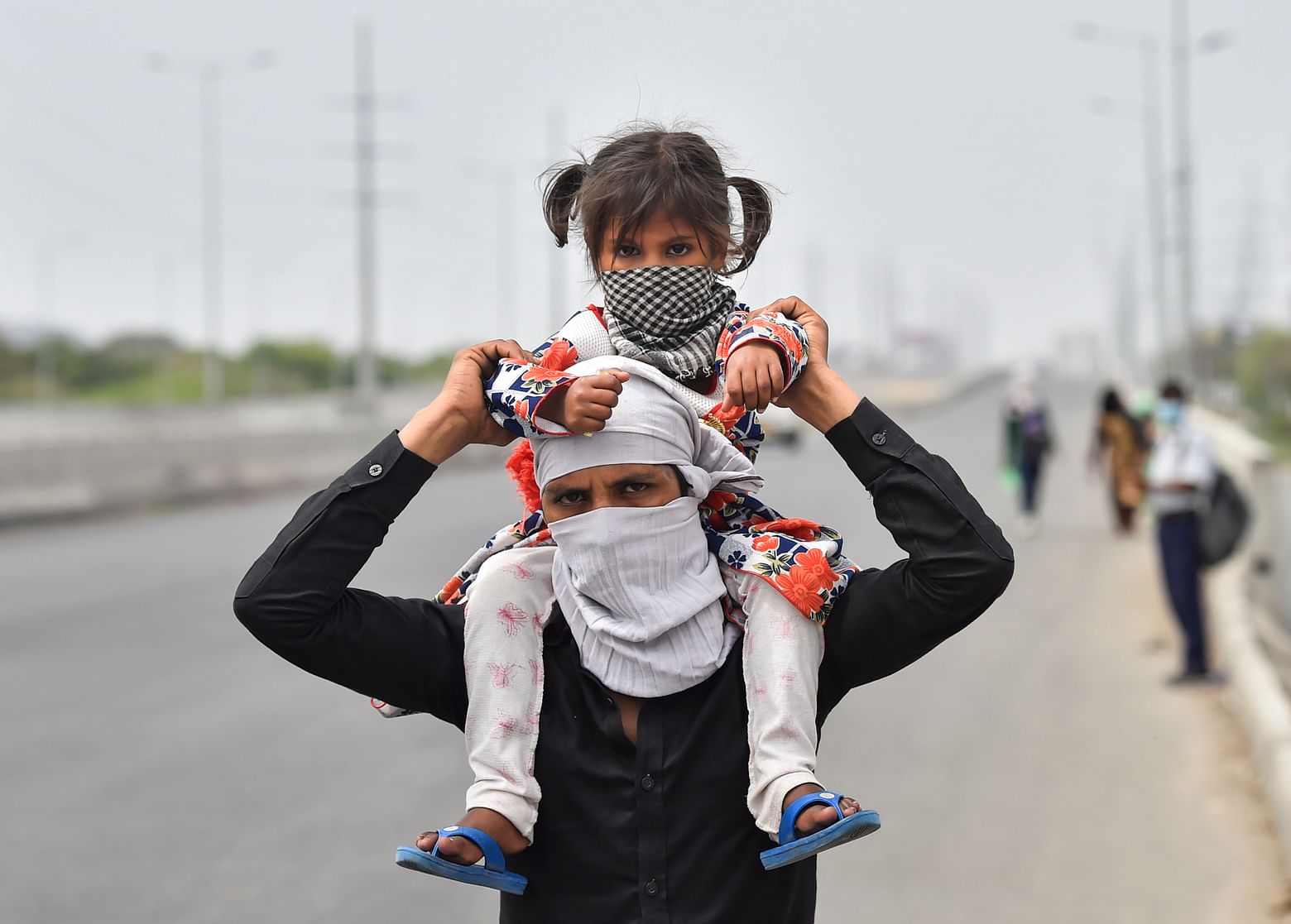 India, which planned to eliminate the remaining 25% of its poverty in the next decade or so, is now in the reverse gear. Migrant labourers, working in various parts of India, began to walk to their home towns as the fear of death by hunger overshadowed death by virus. Photo credit: PTI

With unprecedented job losses the purchasing power of middle class would take a hit. The better off may hit a pause on their excesses. But the bigger worry is about the younger population. Education of entire generation of students has suffered. The pain needs to be shortened as it would otherwise blunt India’s demographic advantage.

Related News: What Covid-19 tells us: It is all about money, honey

Eventually the world would come out of the crisis as the spirit of survival of the human race would prevail. But the question is will it result in shaping a better society? Will it be more humane, caring? Will people spare a thought for the poor and try to help them overcome their miseries? Will people continue to remember the health worker, the cremation assistant, the ward boy, the ambulance driver, the beat policemen, the delivery and logistic boy once the pandemic is behind them?

It would be too much to expect the society to change on its own until a push comes from its political leaders which in the current circumstances looks unlikely. In democracies it is the people who elect their leaders, and on many occasions outsource their responsibilities to them, to shape their future. In an age we are in it’s rare that societal leaders rise from outside the political framework.

The current crisis is likely to encourage leaders to turn insular and “self reliant” as it helps promoting nationalism. It was easy for them to give the epithet “Corona warriors” to those on the frontline of fighting the disease. But once the nationalistic fervour returns it is the men in uniform who are more likely to retain the tag as their rightful badge of honour.

The pandemic is likely to change our behaviour in many ways— our travel habits may get curtailed, the office blocks may shrink, human interactions may take a different form, but social inequalities, prejudices and bigotry are likely to remain the same. They are too powerful a concept etched in minds to be drowned by social distancing.

The signals are already there. Delhi Police is pursuing the alleged perpetrators of January violence in the capital aggressively; state governments in the name of labour reforms are tilting in favour of employers welfare as opposed to employees; the mainstream media, keen to bend, has already outdone the official media and willing to do more. The government in its desperation to raise funds has unleashed a fire sale of its public sector units. With the Opposition in disarray the legislative business that gets pushed without a proper debate is unlikely to be of any help.

But not everything is negative. Contrary to muscular men ruling the world, a set of women leaders with their unique leadership styles proved to be more efficient in tackling the pandemic. Jacinda Ardern, prime minister of New Zealand; Angela Merkel, Chancellor of Germany; Sanna Marin, prime minister of Finland and Tsai Ing-wen, President of Taiwan have all have been showered with praises for handing the pandemic well in their respective countries.

It is not a coincidence that they all belong to the other side of political spectrum, but that should certainly trigger a thought.